Garmin is known for its feature-packed GPS watches, but how does its newest fitness tracker — the Vivosmart 3 — perform during exercise?

As the successor to the widely heralded Vivosmart HR+, the Garmin Vivosmart 3 has a lot to live up to. Garmin dropped built-in GPS and running profiles from its newest tracker, but the company compensated by simplifying the Vivosmart 3’s design and adding intuitive features like VO2 max and stress monitoring.

These changes make the Vivosmart 3 an enticing package priced at $139.99, but does the device perform up to Garmin’s lofty standards? We spent the last few weeks testing the tracker to see. Here’s our verdict.

Garmin’s latest fitness tracker includes exercise options for walking, running, cardio, strength training, and “other,” which you can customize. The Vivosmart 3 also has Move IQ, the company’s automatic activity detection feature, to recognize additional activities. While this might sound like the perfect system to track workouts, the Vivosmart 3 has serious flaws.

When you manually start an activity, there are really no issues. You can choose what data fields you want from each exercise and view them on different screens within the app. The real problems emerge when you want to do a workout that isn’t one of the five available, start exercising spontaneously, or forget to push an activity option before you begin.

Move IQ is supposed to address all of these obstacles, but it failed for several reasons. 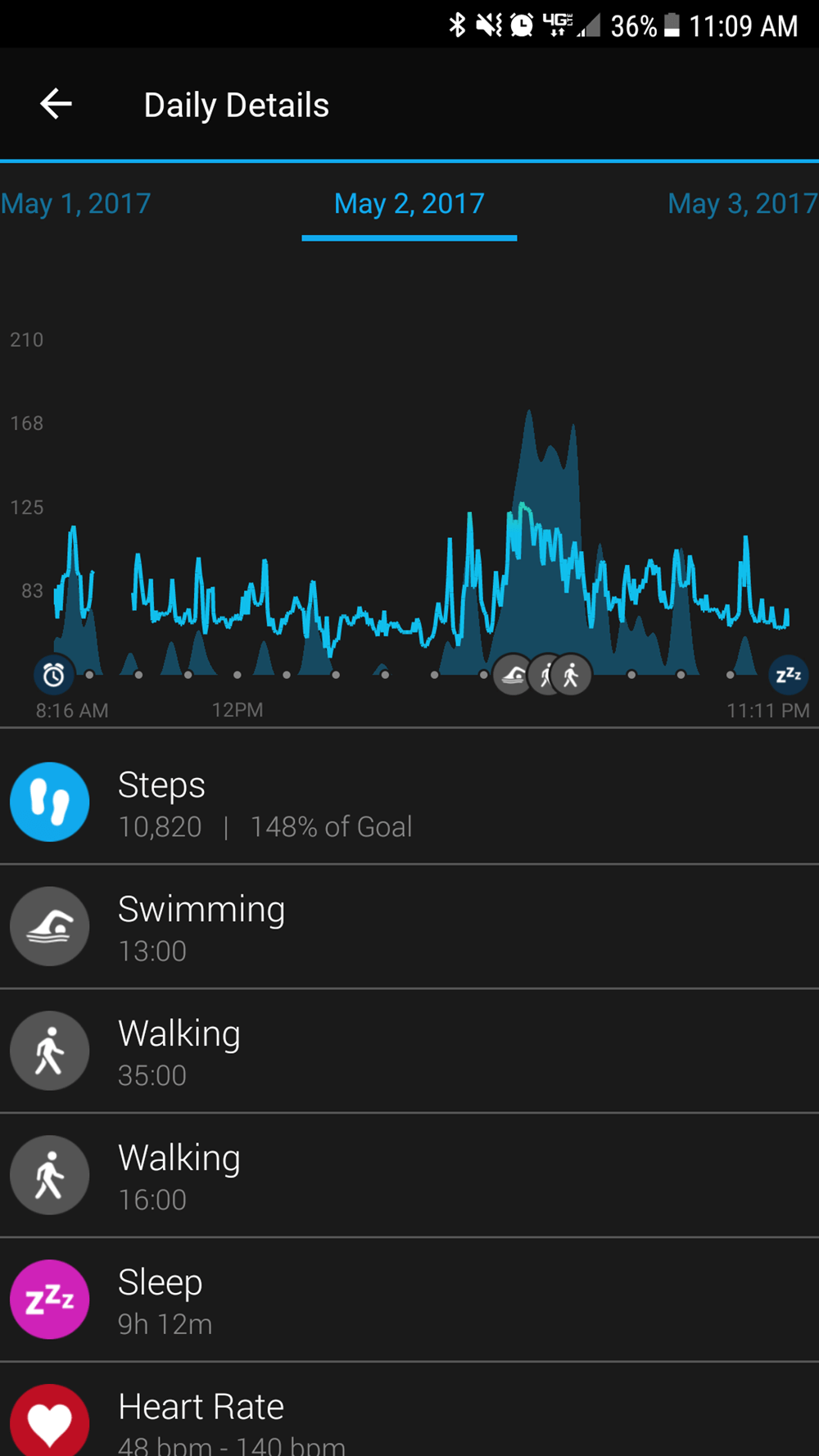 First, the device incorrectly identified activities. This wouldn’t have been a huge deal if I could reclassify them, but the app offered no option to do so. For example, I played basketball once, and Move IQ registered three different activities during that period — swimming and two separate periods of walking. The walking I understand, but the swimming I do not. Regardless, I’m stuck with them and no basketball.

Second, Move IQ registered my exercise times short of what they were. I’m not talking about a few seconds or even a minute. On several occasions, the tracker was off the mark by 10 minutes or more. That’s a pretty big miss. 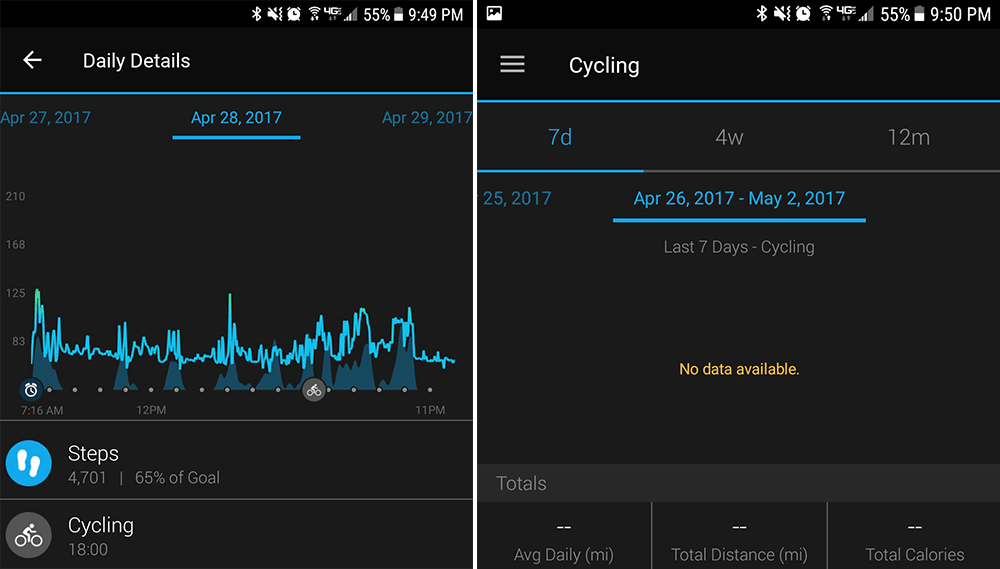 On top of that, the exercises Move IQ actually picked up didn’t register as activities in the Garmin Connect app. Because of this, I couldn’t view any stats — such as distance, speed, or heart rate — that were tied to my biking workouts. When I clicked on the cycling tab within my daily details, all it showed was the start time and duration of the activity, both of which were wrong.

Users can combat some of these problems by recording every additional exercise under the “other” category, but then you won’t have separate stats for different exercises. It’s all a big headache.

When you get beyond the workout debacle, the Vivosmart 3 actually offers some really cool features. One of those is VO2 max — a metric that defines your fitness level — which wasn’t available on the Vivosmart HR+.

The Vivosmart 3 calculates your VO2x max based on an algorithm from Firstbeat. Firstbeat’s technology compares your heart rate against your walking or running speed to determine how hard your body is working to produce your performance.

Garmin’s latest tracker asks you to take a 15-minute walk to determine your VO2 max, but it calculated mine in just over six minutes the first time. Because Firstbeat incorporates machine learning into its algorithm, the more you use your device, the more accurate your VO2 max becomes.

This metric is similar to Fitbit’s Cardio Fitness Score, which is an estimate of your VO2 max. Devices like the Fitbit Alta HR calculate a score based on your resting heart rate and information within your profile. After using both, Garmin’s VO2 max seems like the more accurate of the two.

Stress monitoring is another new feature for Garmin’s Vivo series. Not only does the device provide real-time feedback on your stress level throughout the day, but it also offers timed breathing exercises — similar to those on the Fitbit Charge 2 — to help you relax. 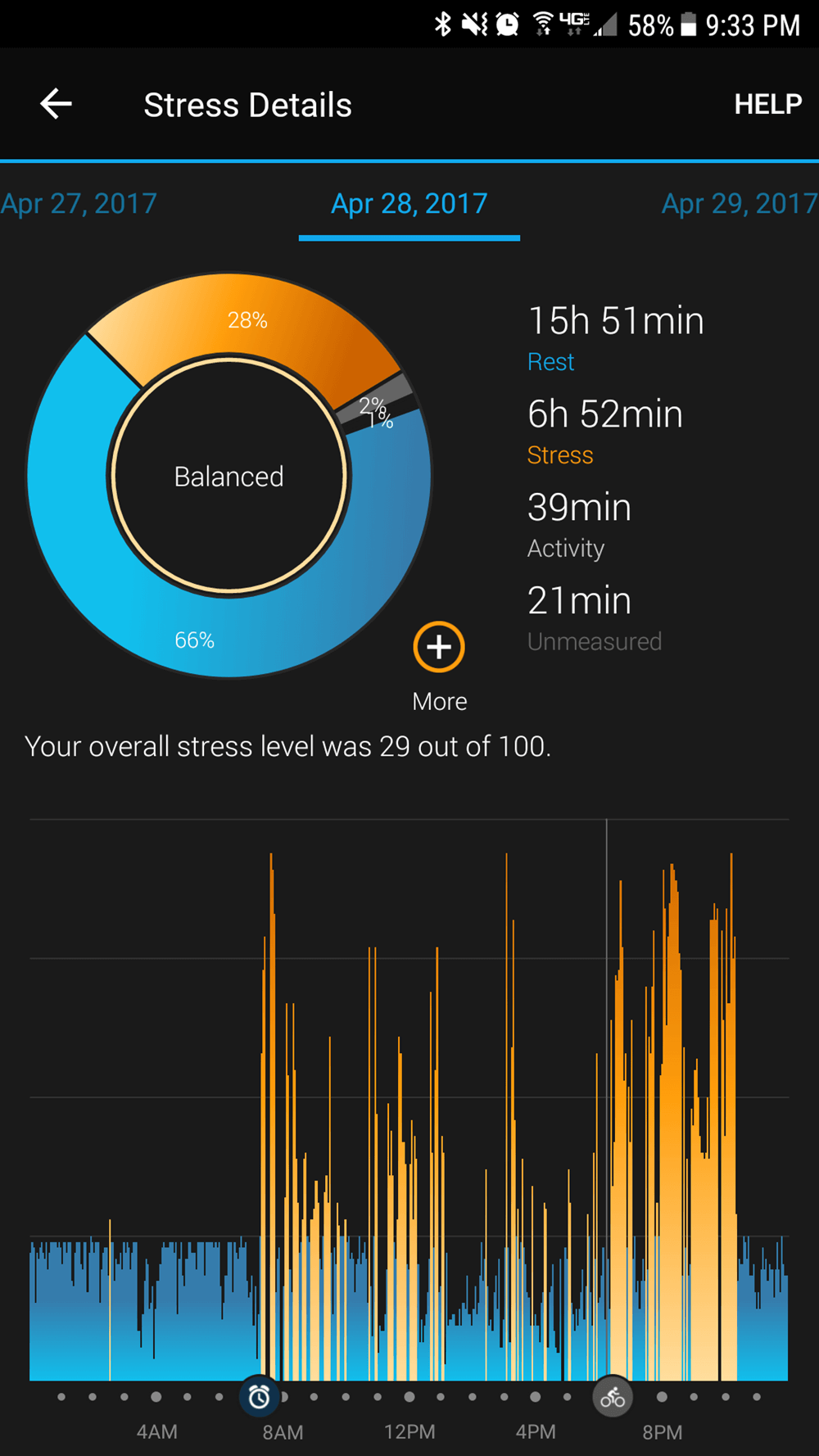 The Vivosmart 3 displays a graph of your stress levels over the last hour, while the app expands on data gathered throughout the day. Garmin Connect also provides a daily score of your overall stress level, which ranges from zero to 100.

The Samsung Gear Fit 2 counts reps for exercises like squats, crunches, and lunges, but it is very particular about form and makes you set all of your parameters beforehand. Not only do users have more freedom with the Vivosmart 3, but it also recognizes more strength training movements and tallies them more precisely than any other device I’ve tested. 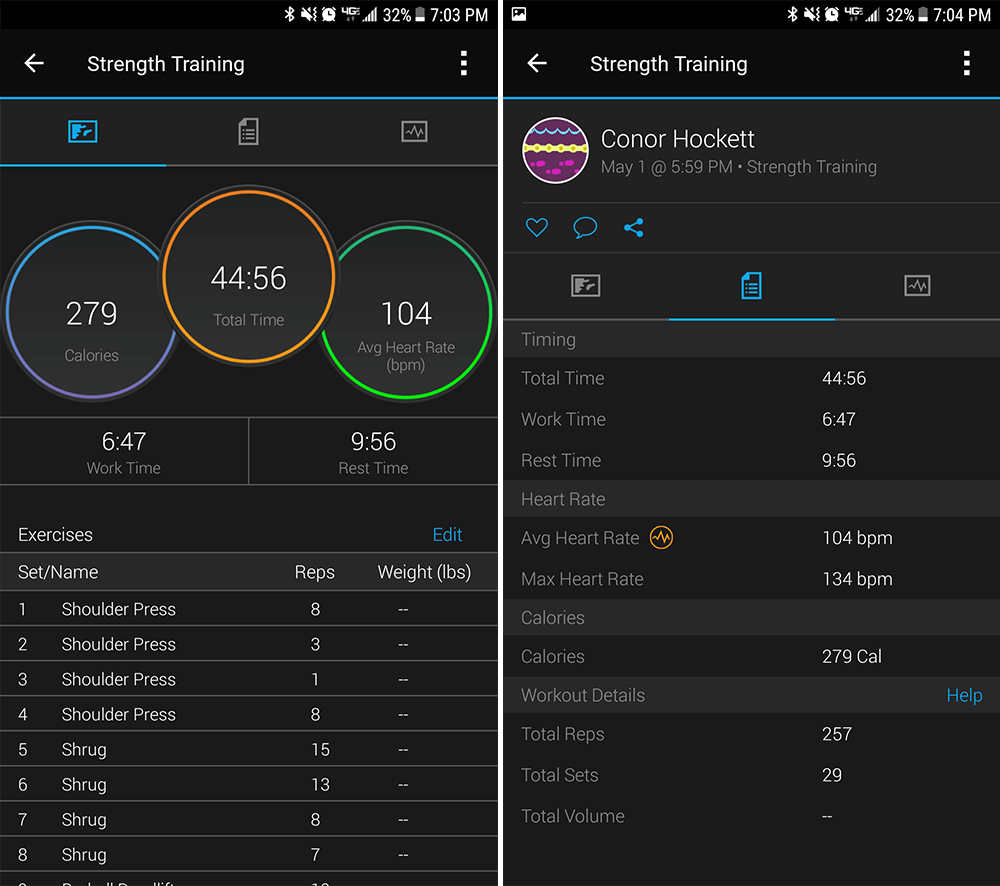 No matter if I was pulling, pushing, or pressing, Garmin’s latest tracker identified the motion with impressive accuracy and counted it as a rep. The device still mislabeled some of the exercises I was doing, but I was able to edit them — along with the number of reps and the weight I lifted — within the app.

Users have to manually account for leg lifts and other exercises where your wrist doesn’t move in the app, but that’s to be expected.

Heart rate was another area where Garmin missed the mark. My resting heart rate appeared to even out over the device’s seven-day testing periods, but many other readings seemed regularly off. There were a few too many times when I sat at my desk for an hour or more and still had a reading in the high 70s or 80s.

My concerns were confirmed when I tested the Vivosmart 3’s optical heart rate sensor against a chest strap. During several runs and interval training exercises, the device failed to keep up with my rapidly ascending and descending heart rate. The readings I got from Garmin’s tracker were 10 to 15 beats lower than the Moov HR Burn throughout my workout.

Many optical heart rate sensors struggle during high-intensity exercise, but the best fitness trackers are able to keep the discrepancy within five to 10 beats. 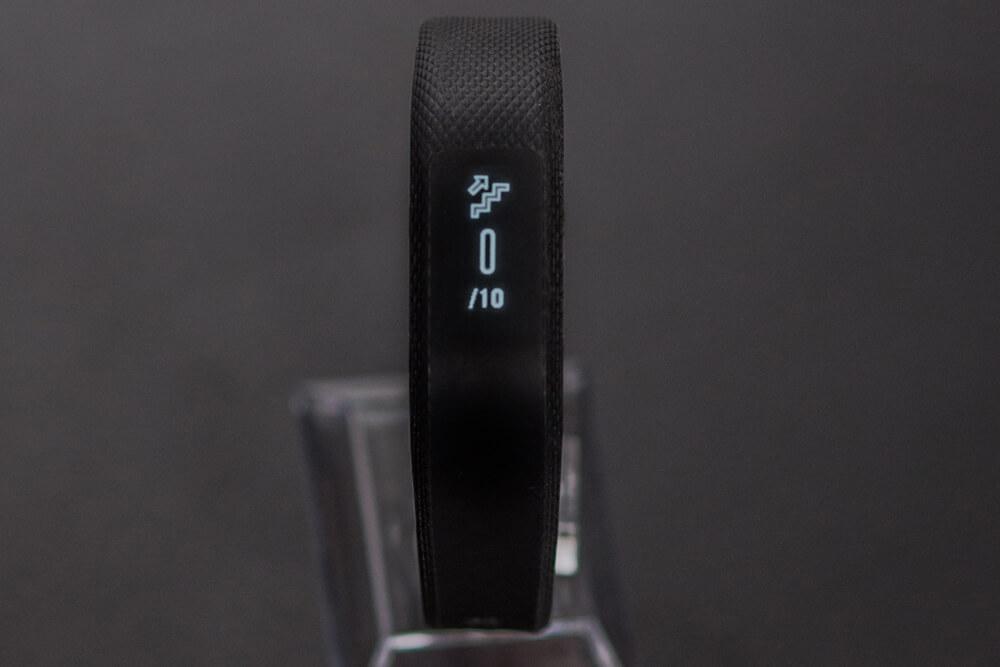 The Vivosmart 3 keeps pretty standard activity stats. It provides real-time feedback on steps, floors climbed, and calories burned, and it also tracks your weekly intensity minutes. Because Garmin didn’t incorporate GPS into its latest tracker, distance measurements are based on your step count.

For every metric except intensity minutes, users can view the previous day’s total on the device. Garmin keeps some data on these stats for as long as 12 months in the app.

While it classifies sleep into levels — light, deep, and awake — the Vivosmart 3 doesn’t use heart rate to identify different sleep stages like the newest Fitbit trackers. Garmin has a separate graph that outlines your movement, but that’s the only extra data field the Vivosmart 3 offers beyond basic sleep tracking. 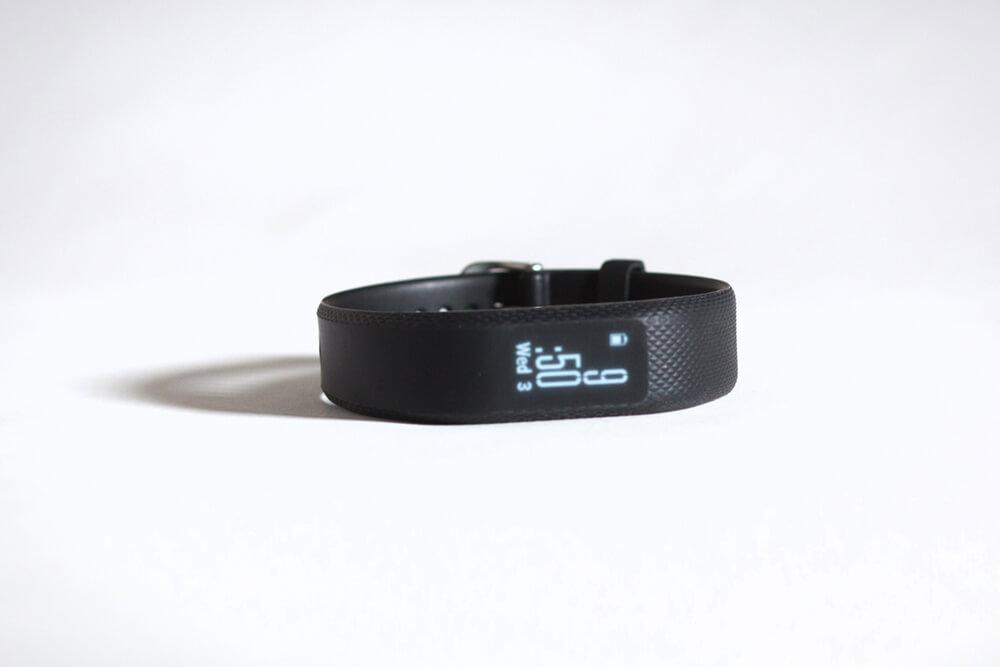 At first glance, the Vivosmart 3 reminded me a lot of the Mio Slice, which is about the blandest fitness tracker out there. Garmin’s newest device has a monochrome screen and a minimalistic design, but after a while, it really grew on me.

Subtlety is the biggest strength of the Vivosmart 3. It is so streamlined that the screen blends in with the strap, causing the entire OLED display to disappear. When the screen is off, the tracker could pass as a regular old bracelet.

The Alta HR was the slimmest tracker I’d tested, but its reign was short-lived. Garmin’s newest device is even thinner and more comfortable. Its rounded edges mirror the shape of your wrist, so it doesn’t butt up against your bone and cause the device to raise off your arm. This made it much easier to sleep with than other fitness trackers. 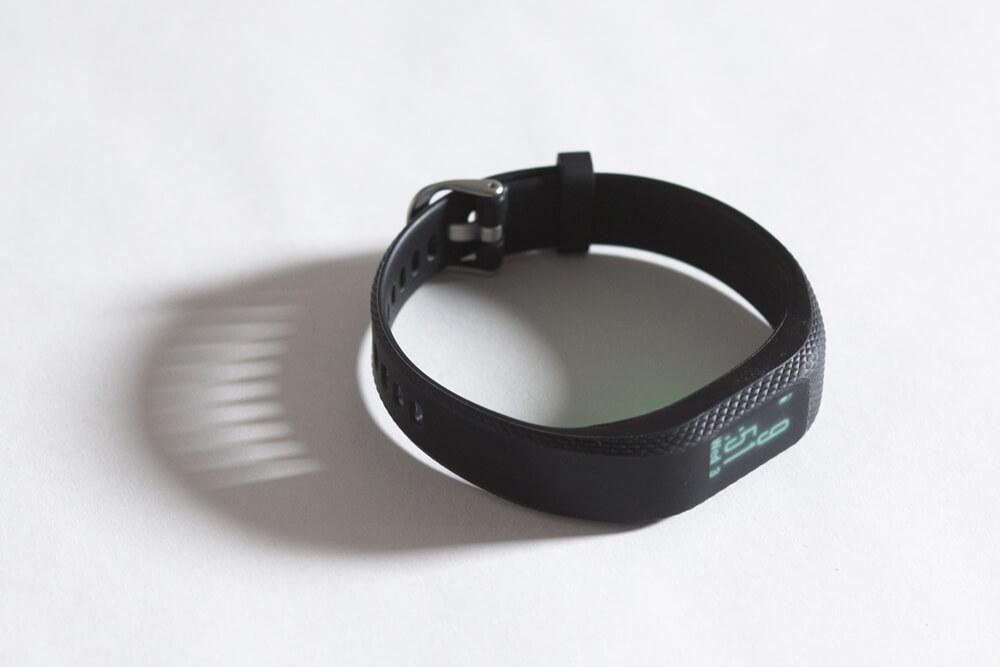 While the Vivosmart 3 doesn’t have interchangeable bands, you won’t need them with this device. Its silicone strap is so soft and thin that it almost feels flimsy — however, it’s anything but fragile. Garmin’s newest tracker is swimproof, and the band itself stayed secure throughout my testing period.

My only complaint is the band attracts a lot of fluff. And because the strap transitions into the display, some of these particles drift onto the screen as well. 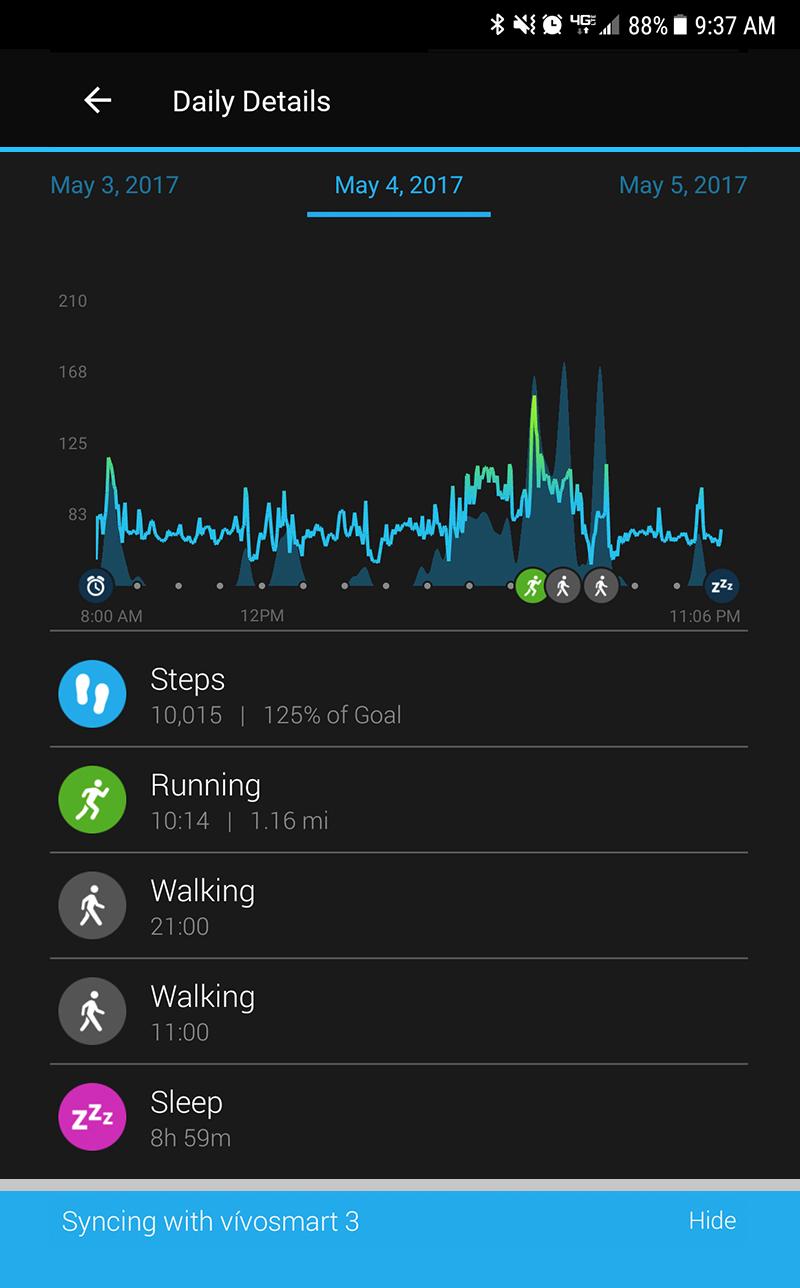 Garmin Connect might not be as user-friendly as Fitbit’s app, but it has a professional feel that serious athletes should find more appealing. Because the Vivosmart 3 has less functionality than other devices, users can’t do as much on the Garmin’s platform, but it still has plenty to offer. The app has separate menus for all of the device’s health and performance features, and it lets you lets you access your own workouts and courses — although you have to create them through garminconnect.com first. 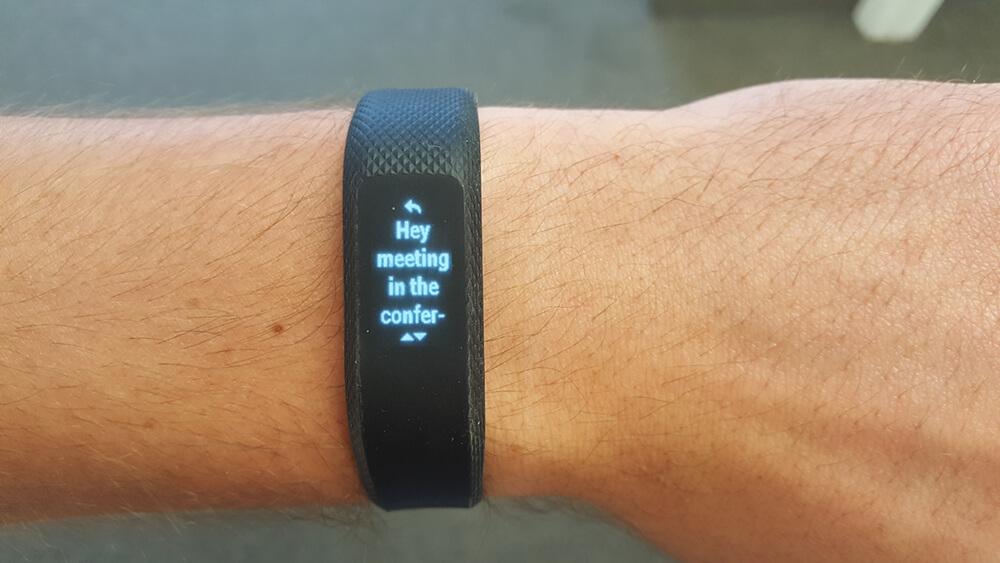 For such a compact tracker, the notifications you receive on the Vivosmart 3 are pretty impressive. Not only do users receive text, call, email, and social media alerts, but they can actually view full messages on-screen. The similarly sized Alta HR offers text, call, and calendar alerts, and it only provides the first part of messages. The Vivosmart 3 also has move alerts, which you can disable in the app’s settings.

Battery life on the Vivosmart 3 was even better than the five days Garmin advertised. My device routinely lasted at least five days, and sometimes up to six. Granted, I did disable the auto-on display, but I was still tracking my sleep every night.

The Vivosmart 3 charges through a magnetic clip and takes around an hour to fully recharge.

Garmin Vivosmart 3: Worth It Or Not?

The high standards set by so many other Garmin devices might be working against the Vivosmart 3 here, but I was pretty disappointed with this tracker. It does offer some value at this price point, but the Vivosmart 3 is just too hit-or-miss to earn a place among the elite fitness trackers.

While VO2 max and stress monitoring give it some features that no other fitness tracker can match, I would still opt for the Alta HR or Charge 2 over Garmin’s latest model.