With the Huawei Watch, Huawei has crafted an impressive, elegant, and powerful smartwatch.

Huawei (pronounced WAH-way) is a relative newcomer to the North American wearable technology scene, bringing with it the company’s very first smartwatch, which emphasizes style and functionality. The Huawei smartwatch made its debut at the 2015 Mobile World Congress to a positive reception, but delayed its US release for several months to ensure its compatibility with Google’s software, which is restricted in China. In an American wearable battleground dominated by the likes of Fitbit, Samsung, and Apple, has this Chinese-borne company carved out a space as a force to be reckoned with — or has it stumbled right out of the gate with a bad first impression? 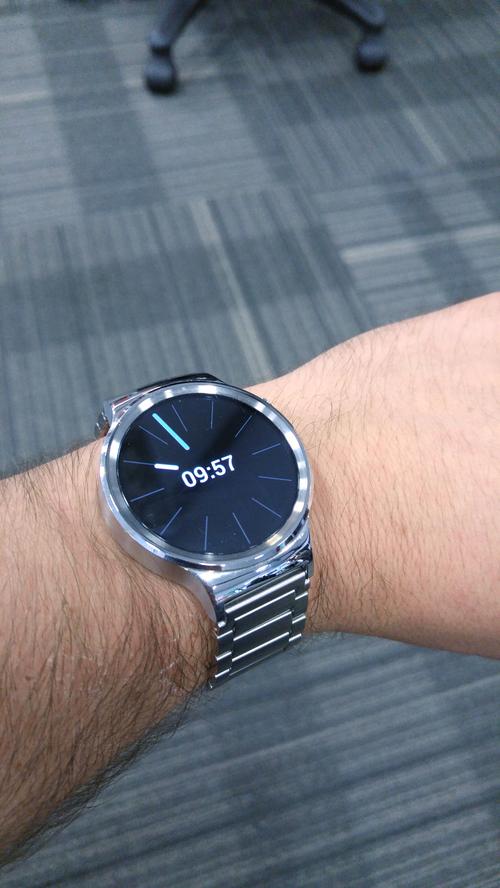 Measuring your heart rate at will is interesting, but superfluous — especially since there are superior options when choosing smartwatches for fitness-specific activities. It’s possible to install additional apps to sense passive heart rate or sleep quality, but these additions drained the paired phone’s battery too quickly to justify using. However, users with a charging cable on hand could circumvent this problem if so desired. 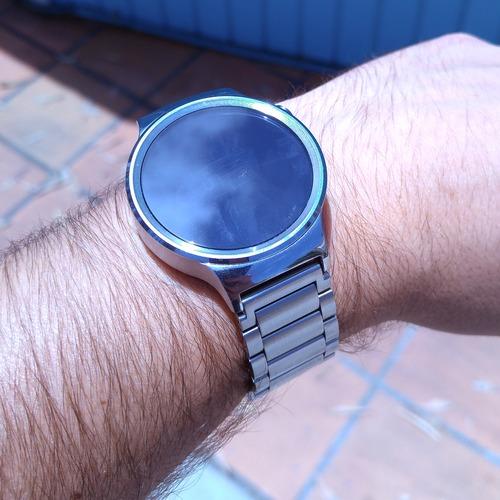 The Huawei Watch has an option to navigate through the menus using wrist actions only, e.g. twisting your wrist with a quick clockwise or counterclockwise snap to scroll up or down, respectively — but these movements felt gimmicky and unnecessary. It could be argued that such a feature is intended for use when driving, so one hand may always be kept on the steering wheel for safety. But in my experience, the layout of the buttons for music and navigation was intuitive enough that the commands could be issued in a matter of seconds with only a few dexterous swipes. 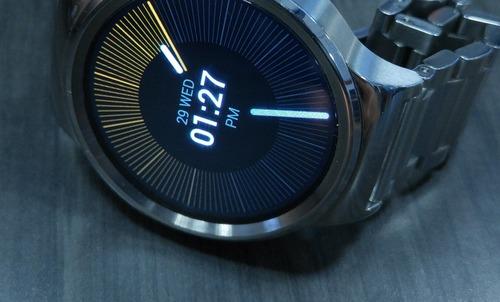 On the plus side, there are a multitude of faces to choose from: 43 come pre-installed, with the ability to download more. Coupled with the options for various watch bodies and straps/bands, the possibilities for customization are much higher than many other smartwatches currently available. From a manufacturing perspective, the Huawei smartwatch’s build quality is such that its elegance, regardless of whichever face/body/strap/band combination is chosen, doesn’t call too much attention to itself. The watch integrates with any style of clothing surprisingly well. 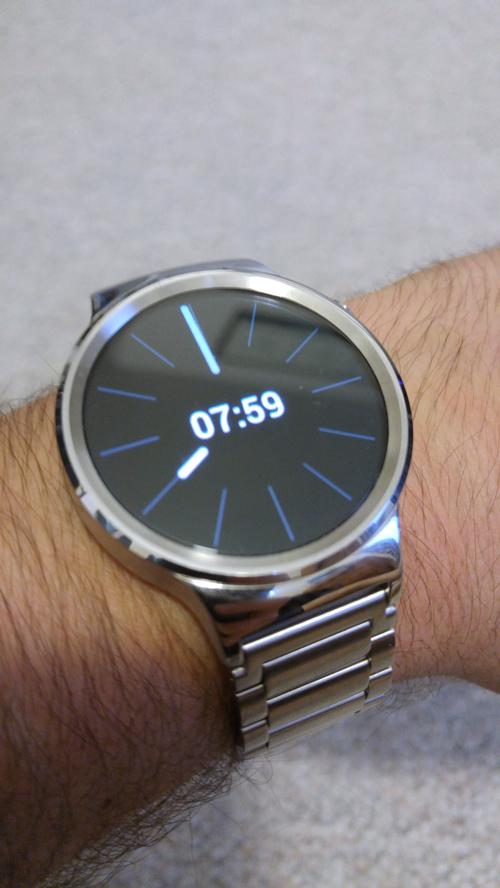 The Huawei Watch runs Android Wear 1.4 (although it’s also compatible with iPhones) and comes pre-installed with a variety of Huawei-native apps for easy phone syncing and fitness tracking: Daily Tracking, Alarm, Agenda, and Timer, to name a few. Installing additional apps through the Android Wear app will cause a prompt to appear on the Huawei Watch, asking for permission to install the same app on the watch.

Any and all phone notifications appear along the lower 20% of the watch’s face with unobtrusive pop-ups and a soft vibration; vertical swipes navigate through multiple notifications, and horizontal swipes provide additional options for the relevant apps. The Huawei Watch’s buttons are large and laid out intuitively, so songs in Pandora can be given an easy thumbs up and texts can be responded to verbally using Google Now — all with a few easy swipes of the finger. 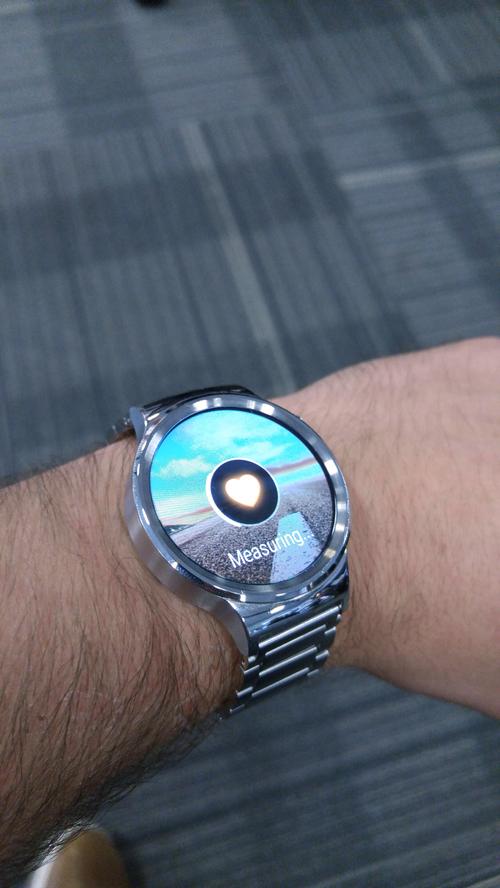 The actions taken on the watch are responsive and engaging, with very little sluggishness. There were no sudden freezes or reboots indicative of subpar software, and memory-intensive apps like Google Maps load in only a few seconds. A primary complaint would be that the watch fails to reliably wake up when checked for the time, and only responded consistently with exaggerated wrist movements. This was alleviated by enabling “Always-On” for the screen, which reverted the normally colored screen to a simple black and white watch face when not in use. Fortuitously, this switch had a negligible effect on the battery life. 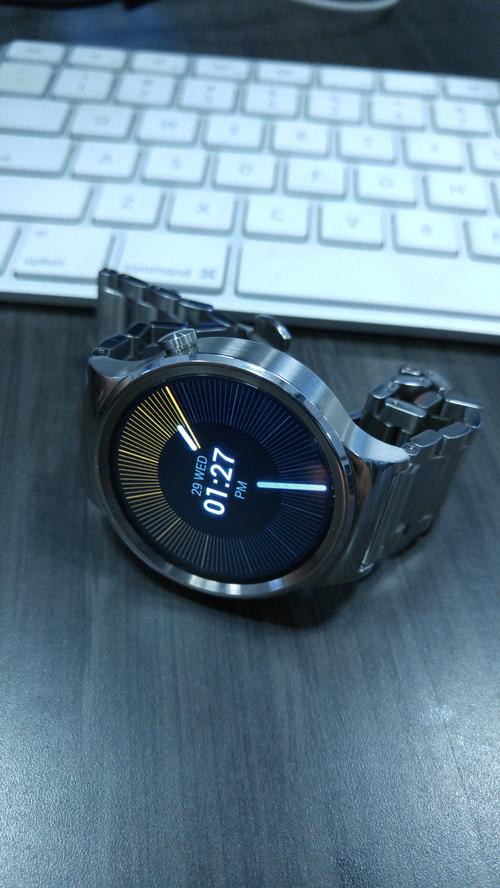 Huawei claims 1.5 days of battery life. However, even with constant use throughout the day (both in fitness tracking and receiving notifications from a phone), it exceeded that claim by a full day and lasted close to 2.5 days of battery life. This lifespan may pale in comparison to even very early Fitbit trackers, which featured what felt like weeks between charges, but the modern techie is used to the idea of charging a phone overnight, every night. The one requirement for the Huawei watch’s battery life is that it survive an entire day without needing an emergency charge, and that requirement is more than met. Compared to similar watches on the market — the Apple Watch (18 hours), the Samsung Gear S2 (1.5 days), and the Moto 360 (1.5-2 days) — the Huawei comes out ahead with a comfortable lead. The battery itself charges in a matter of hours from 0% to 100%, and throughout the day, the current charge is easily accessible through a simple pull-down action on the main watch face screen. 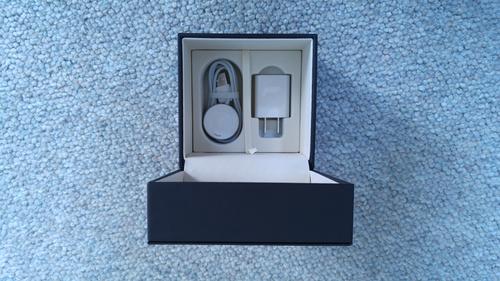 The Huawei smartwatch’s crisp, high resolution 42mm AMOLED display is protected by scratch-resistant sapphire crystal and a thin bezel. At time of writing, Huawei offers eight variants of their watch face and strap, from the utilitarian stainless steel case and black leather strap to the opulent Swarovski jeweled rose gold with blue Italian leather strap. A button located at 2 o’clock along the case provides navigation options through the Huawei Watch’s apps. The case is only slightly thicker than that of a regular watch, and it’s imperceptible once it’s on the wrist. The back of the watch contains a sensor for heart rate monitoring, and recessed inputs for charging. Watch options with stainless steel straps boast a trendy dual-clasp design, and the entire watch weighs in at 55 grams, compared to the Apple Watch’s slightly lighter 50 grams. 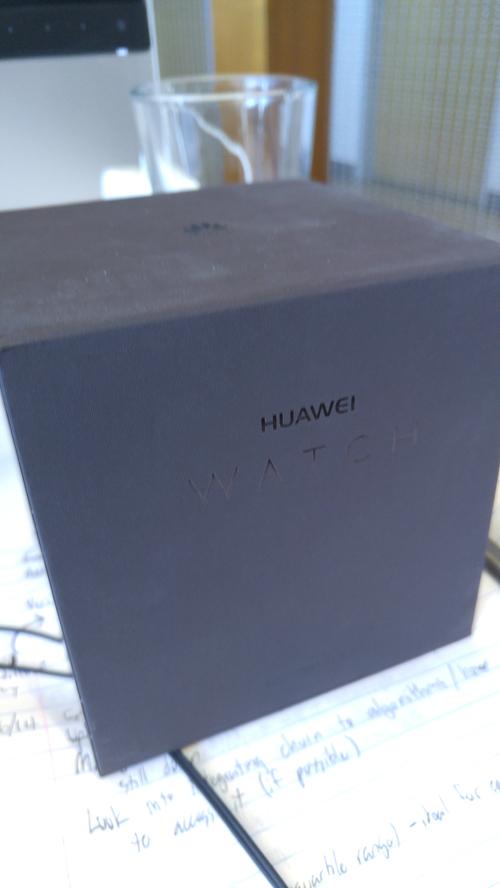 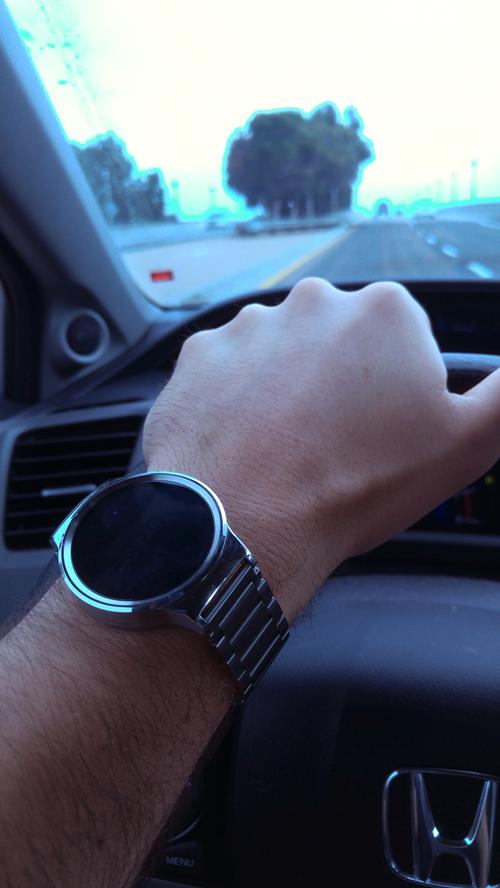 Huawei has crafted an impressive device that other manufacturers should take notice of. The way it seamlessly integrates with a phone to provide an intuitive interface while navigating through apps and notifications makes owning a Huawei Smartwatch almost a necessity. With only a couple minor complaints with respect to its drain on a phone’s battery and questionable extra features, this is definitely a piece of technology worth owning.