The A360 is Polar’s first fitness tracker to include a touchscreen display and an optical heart rate sensor. It also has an extensive library of training modes, notification support, and 24/7 activity tracking. Aside from GPS, the device offers everything you’d want in a fitness tracker.

Syncing issues and inconsistencies within the heart rate technology are the A360’s only real flaws, but they don’t overshadow its value. Hardcore fitness athletes might consider the heart rate problems at high intensity a deal breaker, but for the average consumer, the A360 ($199.95) is a very capable fitness tracker.

Through the Polar Flow app, users have access to an entire library of training modes. Up to 20 of these exercises display on your device at a time, and you can even organize how they appear based on the workouts you do most frequently. Most other fitness trackers, such as the Fitbit Charge 2, offer a set list of activities, many of which don’t extend beyond gym exercises. 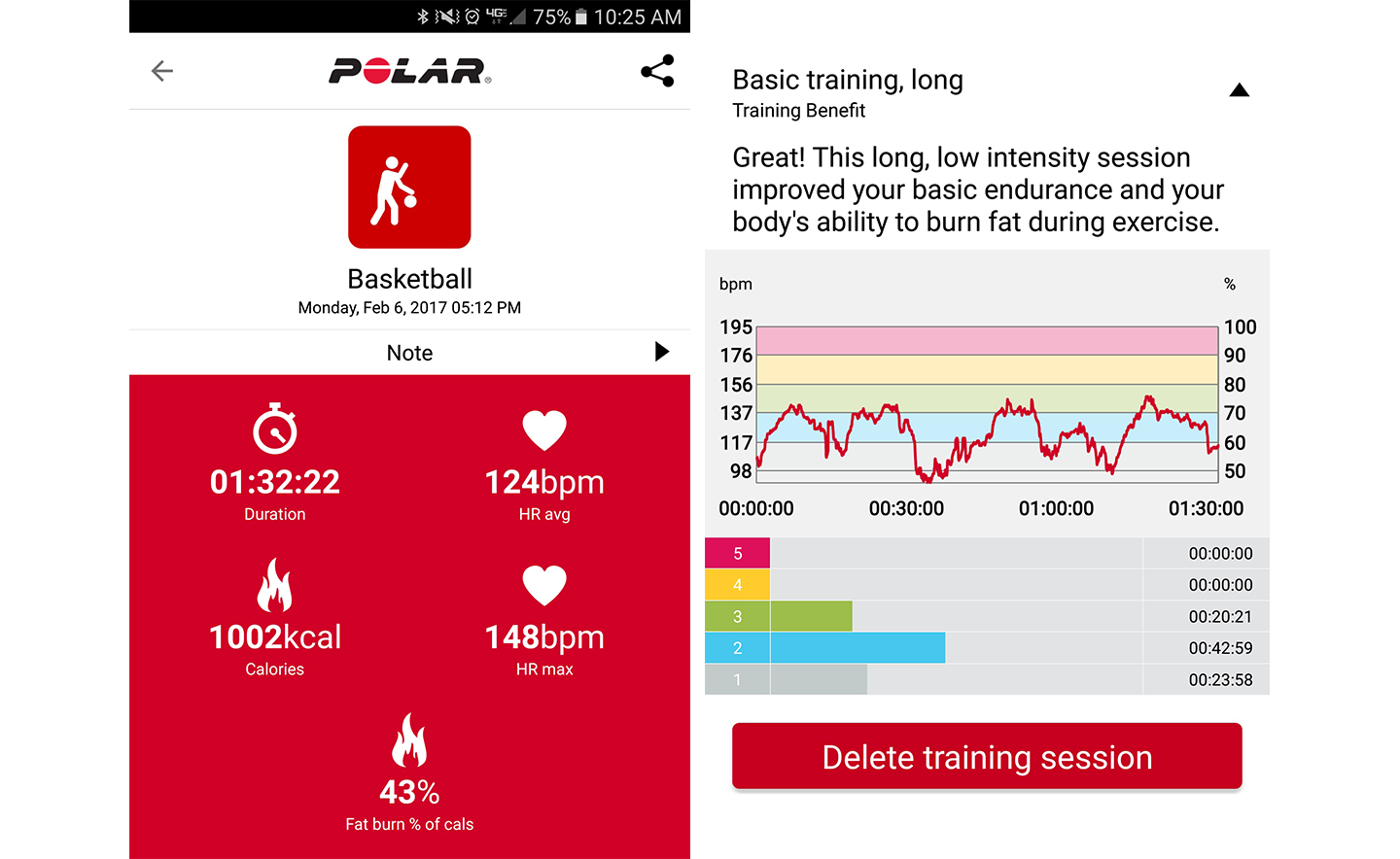 The A360 doesn’t have automatic exercise detection, but these training modes activate with the push of a button. Once you finish a workout, complete stats are available on the device, and for weeks at a time within the app. The Polar Flow app also explains the training benefits of that specific exercise.

The A360’s optical heart rate sensor doesn’t monitor your heart rate 24/7, but you can get on the spot readings at any time through a shortcut in the main menu. Once you push the “My heart rate” button, the device generates a measurement within 10-15 seconds.

After a workout, heart rate data goes far beyond the standard numbers. Along with average bpm and maximum heart rate data, Polar’s app also provides a graph of your heart rate range, what heart rate zones you enter, and how long you spend in each one. This feedback helps the average user interpret data and the impact of each exercise.

To help evaluate the A360’s heart rate readings, I compared them against numbers from the Mio Slice, which produces some of the most accurate heart rate data I’ve seen. 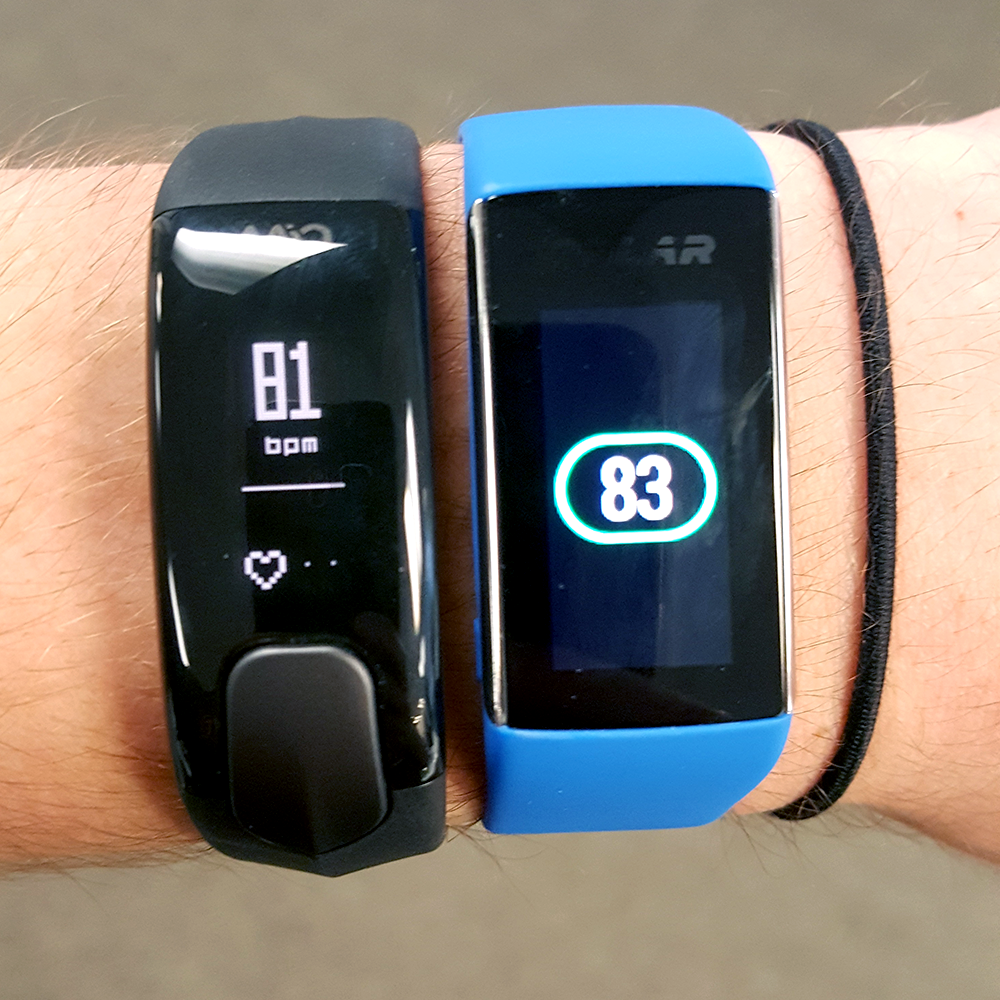 In terms of resting heart rate and low intensity activity numbers, the A360 delivers fairly precise readings. The device was consistently within zero to five beats of the Slice when I was sitting or walking, and those numbers never spiked randomly. 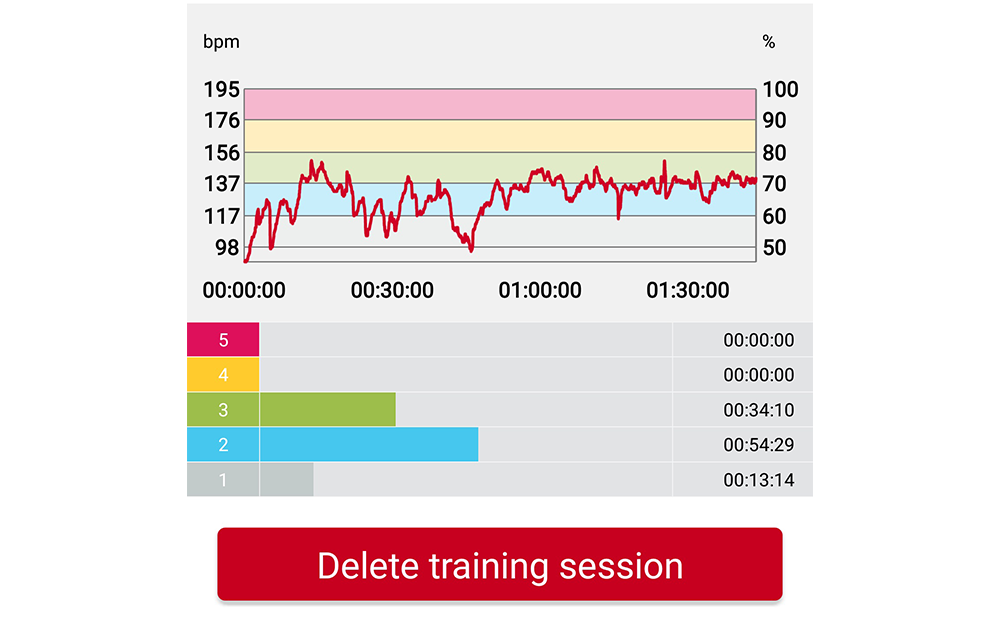 Once I transitioned into high intensity exercise, however, that semblance changed. The A360’s heart rate monitor wasn’t responsive enough to keep up with my fluctuating heart rate during basketball, so its range of readings and heart rate zones didn’t accurately represent my workout. Readings from the Mio Slice below show that I actually reached the fourth and fifth heart rate zones. 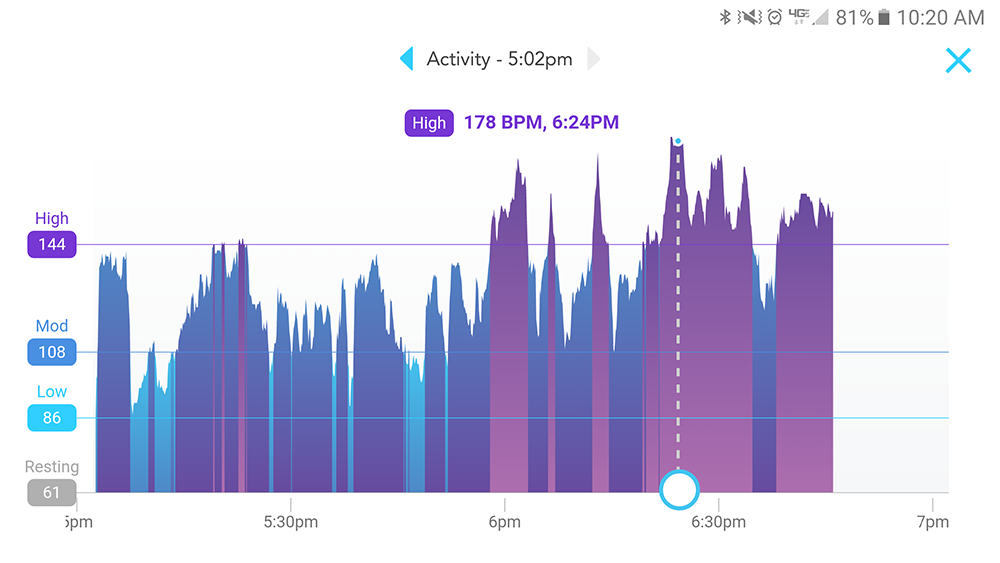 To be fair, the majority of fitness trackers on the market still struggle with heart rate readings during high intensity workouts. For more accurate results, I recommend pairing the A360 with Polar’s H7 chest strap.

With help from the Polar Flow app, the A360 provides a pretty comprehensive breakdown of activity. Instead of just supplying you with fitness numbers, the device also organizes activity into intensity zones and generates a personalized daily goal. 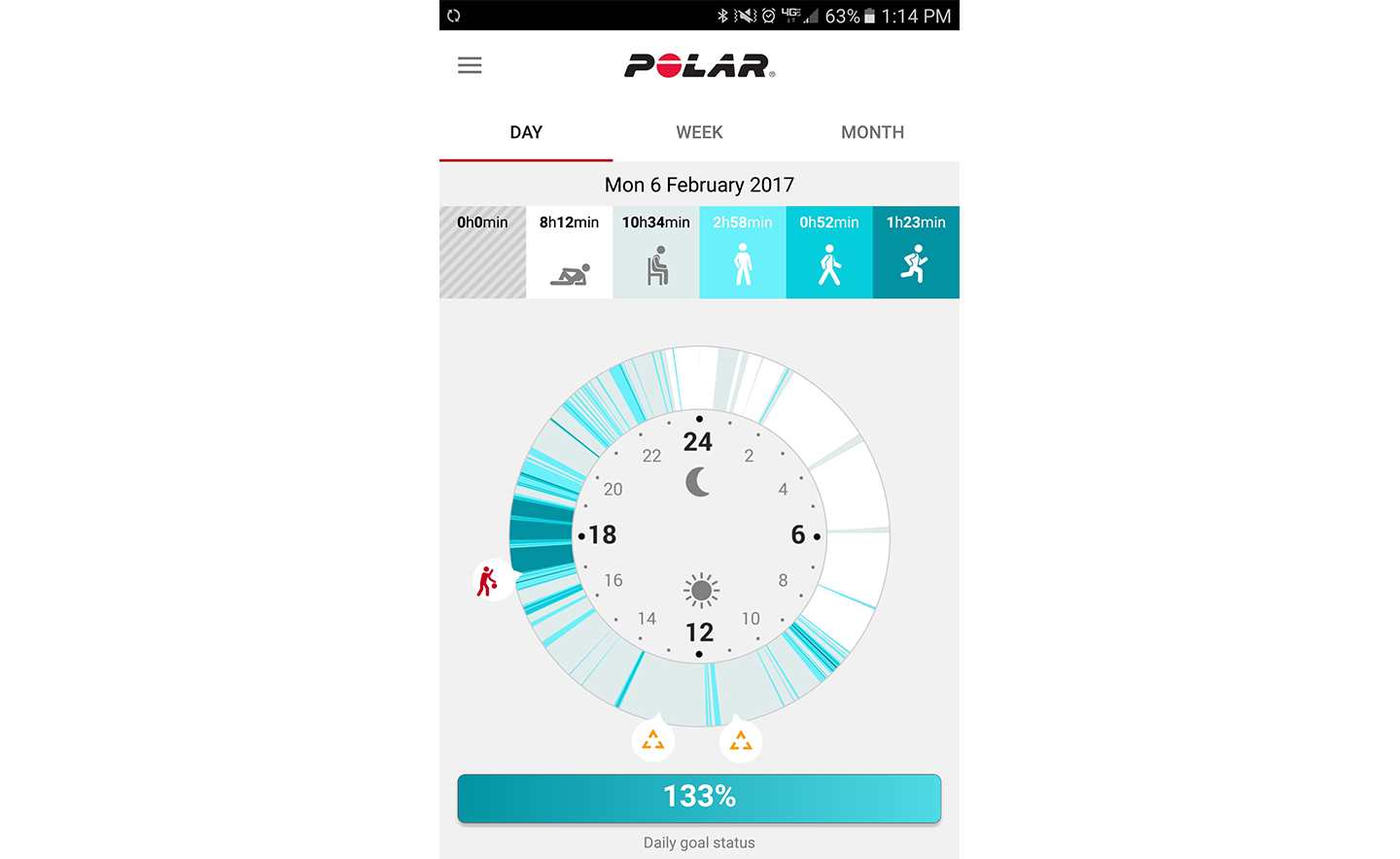 These intensity zones are divided into five categories: resting, sitting, low, medium, and high. Within the app, users can view how much time they spent in each zone, when they were most active throughout the day, and their total amount of active time. Any time spent in the latter three zones registers as active time.

The A360 bases this personalized daily goal on your physical settings and your typical day, which Polar categorizes as mostly sitting, mostly standing, or mostly moving. If you a prefer a more challenging goal, these settings are adjustable.

Progress towards your daily goal displays within a status bar both in the app and in the “My Day” section of the device. When you click on the bar in Polar Flow, it suggests different exercises and how long you must do them to reach 100%. The A360 also has a cool setting where the time of day on the home screen fills up in blue as you get closer to your daily goal. 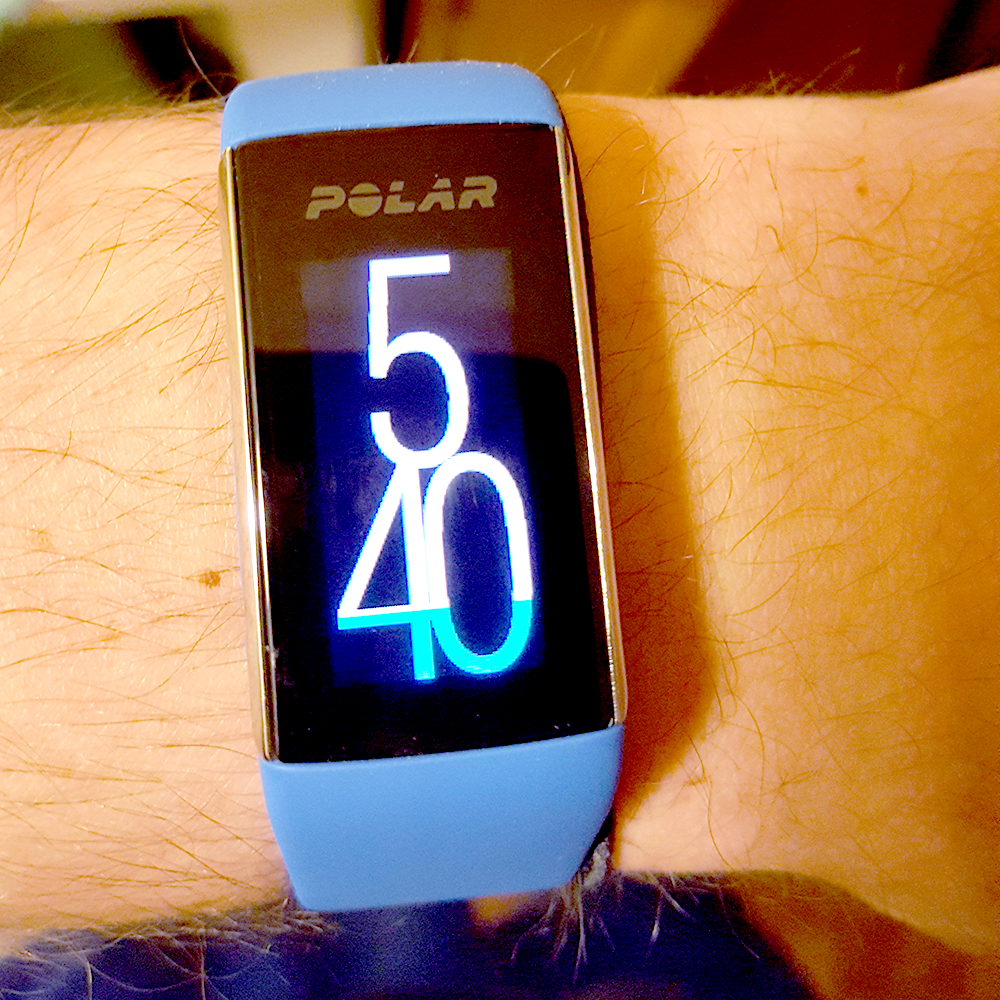 There’s no GPS on the device and it doesn’t store multiple days of activity data, but the A360 makes up for these deficiencies with its other features. Users can connect to third-party apps like MyFitnessPal, Strava, and Google Fit for additional support as well.

Sleep tracking is very basic on the A360. No data displays on the device itself, so you must use the Polar Flow app to see a nightly recap. The app organizes sleep into three categories: time spent asleep (night sleep), restful sleep, and restless sleep. It also calculates the percentage of restful sleep based on your total.

While useful, this feedback pales in comparison to other fitness trackers on the market. A comparable device like the Withings Steel HR provides a more in-depth analysis of your sleep cycle, which includes a graphical breakdown of sleep stages and heart rate.

Because the A360 doesn’t store multiple days of activity data, I use the Polar Flow app a lot to compare my results over previous days and weeks. The app keeps enough data that you can even go back and view activity stats such as daily goal completion average, activity intensity, and all of the available fitness metrics over a month-long stretch.

The app lets you customize everything from sport profiles down to the smallest notification setting. I found the “do not disturb” feature especially helpful because vibrations on the device are pretty strong. Notification alerts woke me up at times in the morning, but I was able to put the device into a sleep mode during a designated range of times with this feature.

Synchronization between the device and the app is extremely inefficient. Anytime you make the slightest change within the app settings, you have to perform a manual sync through a side button on the device. This is a big annoyance.

Even when the A360 and the app sync automatically — to account for a workout, let’s say — the process is hardly seamless. Syncing takes a long time and the slightest change in Bluetooth range causes the data to transfer even slower.

A lot of fitness trackers throw in smartphone notifications as a bonus feature, but functionality is often hit or miss. The A360 provides notification support that’s on par with the Garmin Vivosmart HR.

Alerts for apps, calendar meetings, texts, and just about every other notification that you receive on your phone also arrives on your device. The device sends multiple alerts for the same notification at times, but that’s my only complaint. 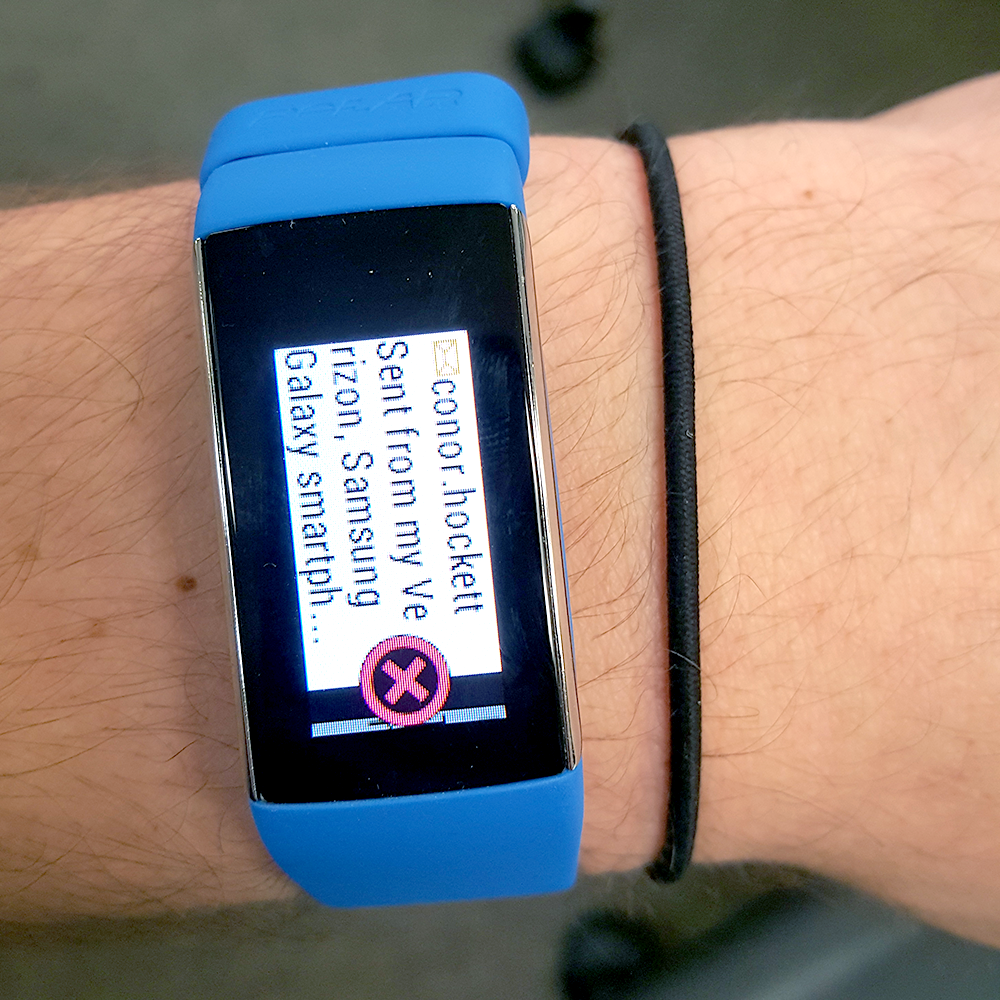 Users can’t answer calls or respond to texts on the A360, but the device does display as much of the message as possible on its 1.06-inch screen. You can also silence the vibration from a phone call on your device through an icon.

Inactivity alerts are also part of the A360’s notification system. Anytime you sit for an hour without a significant amount of movement, the device sends you a message. Even after you dismiss these alerts, an inactivity stamp remains in both the app and in the “My Day” section of your device. This guilt-inducing symbol acts as a constant reminder to move and provides a little motivation to reach your activity goal. You can disable these inactivity alerts in the settings. 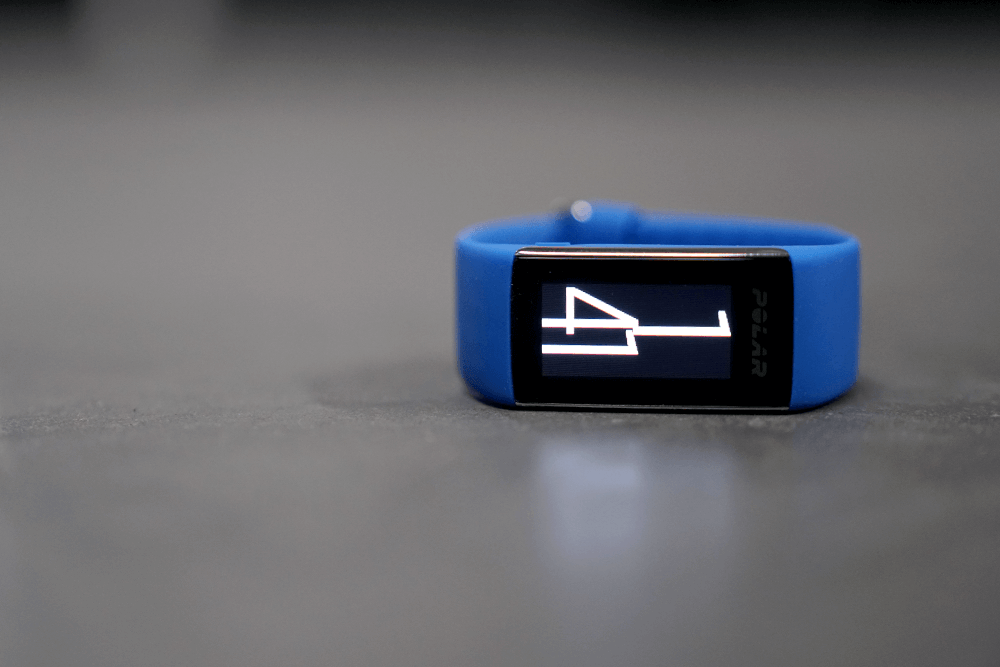 The A360’s display is exceedingly more attractive than its 80x160 screen resolution suggests. Even in in direct sunlight, the screen remains vibrant and readable.

Despite its color touchscreen, you can’t immediately interact with the A360 using your finger. You must first activate the screen in one of two ways: by turning your wrist towards your face or by pushing a small button on the left side of the band. This button also takes you back to the previous screen and can initiate a sync with your smartphone.

Once the device wakes up, the touchscreen is remarkably responsive. Water doesn’t influence the display, so you can easily scroll through and click on different screens in the shower or pool.

With only three menus to choose from, the A360’s UI is remarkably simple. Even if this is your first fitness tracker, there’s almost no learning curve.

Having water-resistance down to 30 meters is impressive in itself, but the A360 joins an exclusive club of touchscreen trackers that function while swimming. A similar device like the Samsung Gear Fit 2 isn’t even suitable for use in the shower.

The only thing to watch out for in terms of water with this device is its charging port. Polar makes repeated warnings — both in the box and on-screen each time you plug in — that the A360 shouldn’t be charged when sweaty or wet. 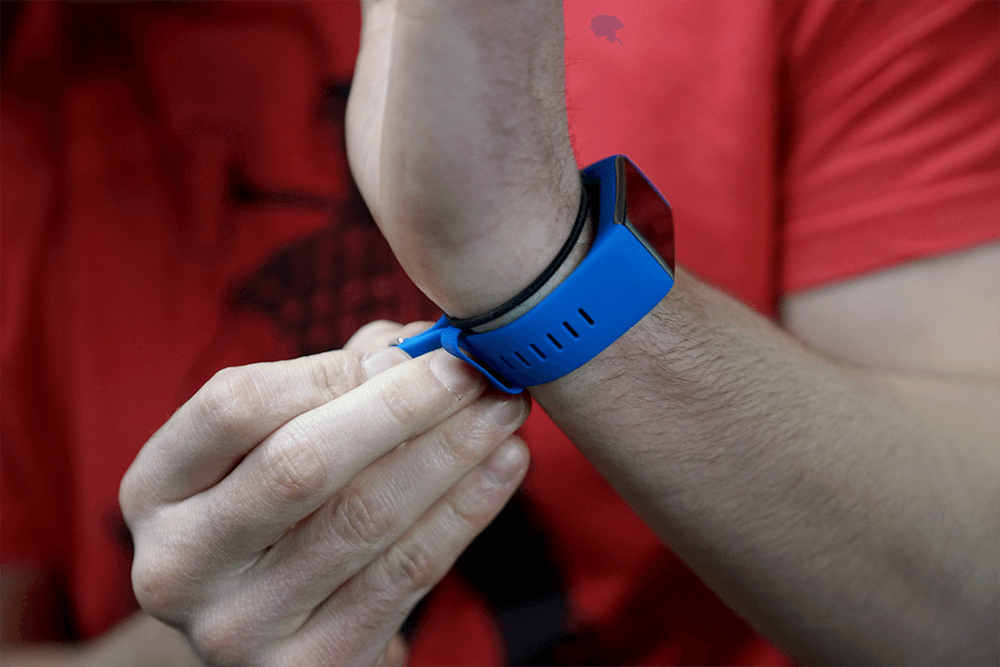 To go with the A360’s vibrant touchscreen, Polar offers wristbands in a variety of colors, all of which are interchangeable. Bands are also available in small, medium, and large sizes to accommodate wrists from five to nearly nine inches in circumference.

Much like the silicone strap on the Moto 360 Sport, the A360’s wristband is breathable and dries quickly, but it attracts a bit of dust. Some customers have complained that the band unhooks as they sleep, but I slept with the device on for two weeks with no issues. In fact, I found the two-pronged clasping system to be more secure than similar mechanisms on other trackers.

Polar claims that the A360’s battery lasts up to two weeks with 24/7 activity tracking and the smart notifications disabled, but I always kept mine on. This translated to nearly five full days of battery life, which is better than a lot of touchscreen trackers on the market. 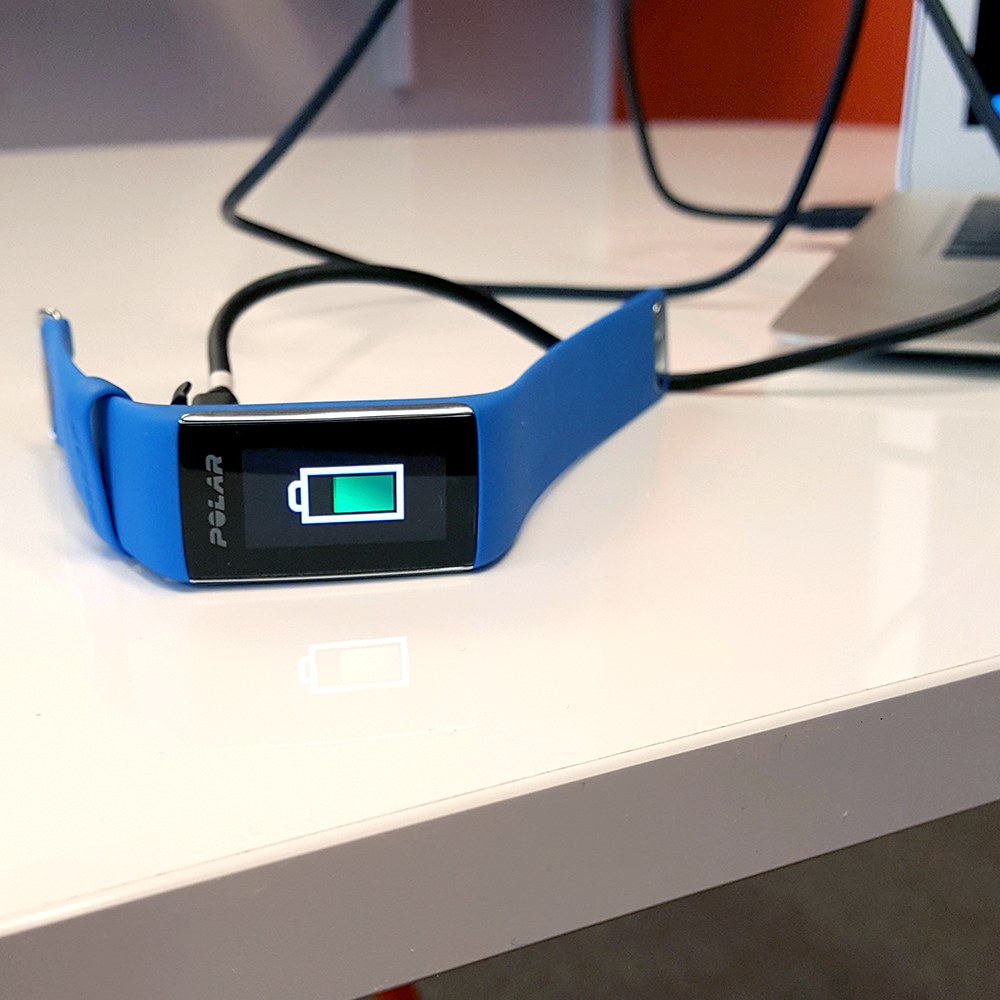 Many wrist-worn wearables charge through magnets on a dock, but the A360 uses a charging cable that plugs directly into the device. It takes just over an hour to fully recharge.

The A360’s touchscreen display and overall design rival the Samsung Galaxy Fit Series. Couple that with a variety of training modes and insightful feedback and you’ve got a very capable fitness tracker. The inconsistent heart rate readings might scare away workout fanatics, but the A360 makes a pretty good case as an all-day device for the average consumer.