Contributed by Jen B. Want to write for WearableZone? Check out our guidelines.

While Android continues to dominate the virtual reality market, it will probably meet its biggest competitor soon. All signs indicate that an Apple VR headset in the works.

Industry experts believe that the California-based tech company has been secretly developing a head-mounted display (HMD) for quite some time.

However, if the recent comments by Apple CEO Tim Cook signal anything, the company is concentrating more on augmented reality glasses than developing its own VR device. According to Cook at the Utah Tech Tour in October, AR will become bigger than VR as it integrates into our daily lives moving forward.

However, if they’re working on an augmented reality device, it hasn’t left the lab quite yet. Recent approved patents don’t reveal any new AR tech. Instead, the latest one focuses on a device that will be similar to the likes of Samsung’s Gear VR.

Read on to find out why we think Apple is working on a VR headset. 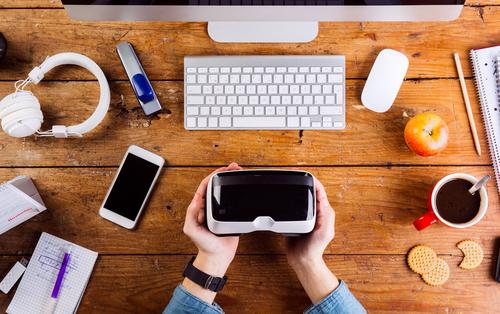 According to Business Insider, Apple has a “secret team” working on the new technology. The effort involves several teams from various startups acquired by the company. In fact, Apple has bought a number of VR-related companies in the last three years:

Apple recently hired an expert in HMDs, and other job postings from 2014 suggest that they are specifically seeking developers who can build “high-performance apps that integrate with virtual reality systems for prototyping and user testing,” according to Forbes.

Related: Expert believes AR and VR will merge by 2020.

It should also be noted that Apple has spent money to send its employees to VR-related exhibitions and conventions, such as the Virtual Human interaction Lab at the Stanford University.

There has been speculation online that the company will release the VR headset along with the iPhone 8, which will be its main platform that will allow it to run HD apps. The phone is expected to feature plenty of innovative specifications, making it a perfect paired device for a VR display. These features include the edge-to-edge screen, a high-performance processor and GPU, as well as wireless charging.

Although many consumers reacted negatively toward the AirPods on the iPhone 7 when they were announced in September, some experts believe that Apple is preparing consumers for the arrival of their VR headset. Oscar Raymundo of and Macworld thinks that “[It is] Apple’s innovation at its best … forcefully fostering wireless innovation.”

Apple is already priming us for something big: according to O2, the iPhone 7’s audio is “2x louder than its predecessor, and its new stereo system that produces impressive audio quality.

In late 2013, Apple was granted a patent that described a head-mounted display. Based on the abstract of Apple Patent (USPTO 8,605,008), it protects a goggle system that provides “a personal media viewing experience to a user.” It will have an outer cover, optical components, a lens, and a mid-frame.

In October 2016, another patent surfaced online depicting the same HMD, albeit a bit more refined. It offers a clear image of how the VR headset would work. According to the Apple Patent (US 9,482,869 B2), the device is worn on the head and configured to integrate with a smartphone. It looks similar to the Gear VR: a phone fits into the front of the VR device to provide content to the display screen.

Whether Apple is working on a VR headset or AR technology, one thing is certain – the consumer market for immersive technology is about to heat up.

About the author: Jen B. follows the latest developments in augmented reality, holograms, virtual reality, and wireless technology. She is also interested in music, traveling, fashion, and video games.

The California-based tech company has been secretly developing a head-mounted display (HMD) for quite some time.