Samsung heated up its rivalry with Apple by releasing the Gear S3. It’s a direct attempt to steal market share from the Apple Watch, which is currently dominating the smartwatch market.

In our review of Samsung’s latest watch, we noted a few ways it stood above the number one smartwatch on the market. But it also falls short in a few important ways. If you’re not sure which watch really is the best for you, here’s a handy cheat sheet on the differences between them.

WatchOS 3.0, Apple’s most recent update, lives up to the company’s long reputation of software so simple and intuitive that a toddler can use it. One of the coolest features is Force Touch, which allows you to subtly interact with the watch by changing how hard you press on the watchface. The glance feature also allows you to have quick access to information that’s important to you.

Related: How to set up your Apple Watch

Samsung is taking a bit of a risk by sticking with their home-brewed OS instead Android Wear, the more popular open source platform. But the gamble mostly pays off. Tizen lets the Gear S3 have features that are on par with the Apple Watch, while still having a lot of control over the software.

Both operating systems are equally quick and responsive. So unless you have a personal preference, you’d be hard-pressed to come up with reasons one OS is superior to another.

It’s clear that Samsung Gear S3 wants to emulate analog watches. While Apple choose a more monitor-like square display, the Gear S3 has a traditional round face. The case of the “Classic” watch looks like a bulky dress watch a lawyer or banker might buy in order to look professional. The “Frontier” is more modern, but still adheres to classical watch design standards.

Like other Apple products, the Apple Watch is minimalist, but distinctive. The bulbous, square display is meant to feel like you have a tiny iPhone on your wrist.

Waterproofing is a significant way in which these watches differ. When the Apple Watch Series 2 was unveiled, Apple (justifiably) explained the feats of miniature engineering that went into making it the most waterproof smartwatch ever. 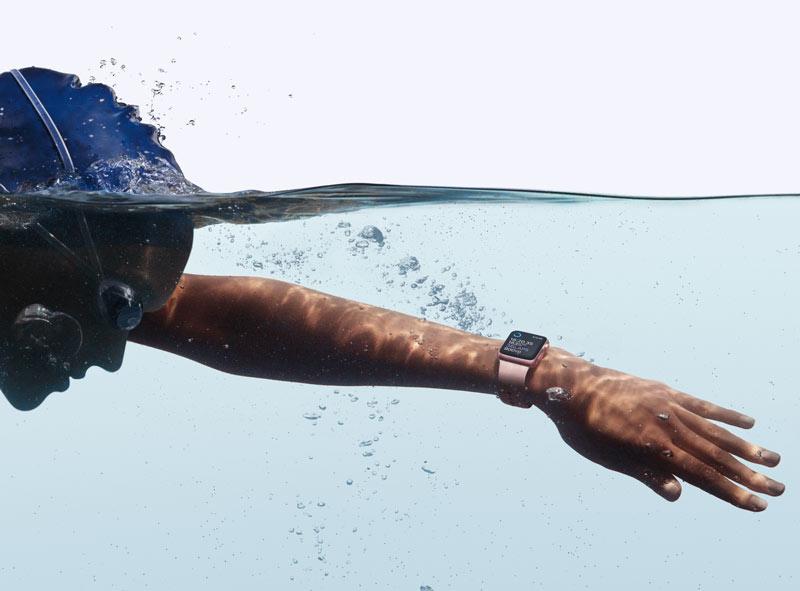 You can swim with it on, and even use it to track your laps. It’s not a good idea to subject it to too much water abuse (going diving with it is a bad idea), but it can withstand extended stays in shallow water.

While the Samsung Gear S3 is water-resistant, it isn’t quite as fully waterproof as the Apple Watch Series 2. You can safely take a shower with it on and not worry about it shorting out. And if you drop it in a pool and fish it out in a minute or two, it will probably be fine. But don’t expect to take it for a swim for an extended period of time.

While the app market is always in flux, as of this moment there are significantly more options available for the Apple Watch. It’s popularity ensures that app makers rush to develop for the smartwatch. Apps from most major tech and media companies are there, along with tons of other apps from smaller developers.

The Samsung Gear S3 does offer many apps, including some from heavyweights like Uber, ESPN, Yelp and Google, it just doesn’t have the diversity that Apple can offer. Samsung is stuck in a bit of a chicken and egg problem. The Gear S3 isn’t quite as popular as the Apple Watch in part because it doesn’t have as many apps, and it doesn’t have as many apps because it’s not as popular. However, if Samsung manages to grab more of the smartwatch market in 2017, we should expect t the the number of apps developers who decide it’s worth their time to work on the Gear S3 to increase.

If you’re not a fan of taking your watch off every day, then the Samsung Gear S3 is your best choice. In our experience, it lasts around two to three days on a single charge, though some have reported being able to use it for four days between charges. The Samsung Gear S3 comes with a wireless charging dock.

The Apple Watch, on the other hand, can only be used for about one day on a single charge. If you want to use it daily, then you should also plan to place it on the included magnetic charging dock daily.

The base model of both sizes of the Apple Watch cost more than the Samsung Gear S3. For a simple Apple Watch with a silver aluminum case, retail price is $369 for the smaller case and $399 for the larger case. If you want a fancier band or a stainless steel case, then expect to shell out $100 or $200 more.

Is The Apple Watch Or Samsung Gear S3 Better?

There is no clear winner here. The smartwatch that’s best for you depends on your budget, priorities, and sense of style. However, one fact is clear: both of these smartwatches rank amongst the most advanced wearables on the consumer market right now.

Here’s a handy cheat sheet on the differences between these smartwatches.