The Bracelet Phone And The Race To Kill The Smartphone

The more ingrained a piece of technology is, the more primed it is for disruption. For connected people, there is nothing more ingrained than the smartphone. It’s not only the hub of every other wearable you can buy — it’s the hub of many people’s lives.

Unseating the smartphone will be the biggest seismic shift in consumer technology since the introduction of the smartphone itself. And the device that has the greatest potential to slay that Goliath is the bracelet phone.

If consumers have access to a full range of smartphone functions from their wrist — where a device is more convenient, easier to access, and harder to lose — then the smartphone itself will be redundant. If that happens, we might look at the smartphone days with the same kind of nostalgia we have for the Motorola Razr.

Creating a successor to the smartphone means overcoming Everest-sized practical and technological challenges. But that isn’t preventing people from taking a shot at it. These companies are creating devices that aim to be as convenient as a smartwatch, but as functional as a smartphone.

In 2014, a video mock-up of the Cicret Bracelet concept went viral. It shows users wearing an orange bracelet that projects a full, interactive touchscreen display on their wrists.

Users are seen opening their email, checking the news, and playing mobile games. A large part of the video’s success relied on people mistakenly thinking it was a product demo instead of what it actually was: a vision of how the product should work.

A subsequent release of the the first working prototype shows the projected touchscreen concept in action, but so far, it’s a far cry from the mock-up.

The French company behind the Cicret, CN2P SAS, hasn’t yet shown any real, working devices. But on their homepage, they claim that models will ship at the end of 2016. Considering how commonly crowdfunded projects miss their launch date, however, it’s best to take that projection with a grain of salt.

A Chinese startup called the Moxi Group is taking a more conventional attempt at the bracelet phone. Their device features a bendable screen that wraps around the user's wrist. It can also lay out straight and work like a common smartphone. They claim that they will ship 100,000 of the devices in 2016. The first iteration of the device will only have a black and white screen. Moxi Group’s plan is to launch in China first and see if there is any demand overseas.

Lenovo has thrown their hat into the wearable phone space with the Lenovo CPlus. Youtube personality Meghan McCarthy demoed the device in San Francisco at Lenovo Tech World ‘16.

Details about the device are scarce, as it hasn’t moved past the working prototype phase. But people who have used it say that it operates in one mode as an upright smartphone, and it dynamically switches to braclet phone mode when you slap it on your wrist.

What About The Usual Suspects?

Noticeably absent from this list are the two companies who have the most to gain from being on the cutting edge of smartphone technology: Samsung and Apple. Neither have announced a bracelet phone project. But that might be a byproduct of their secretive nature, rather than their indifference to innovation. Both, however, are working on bendable phones, which might quickly lead to bracelet phones.

In 2015, Apple filed a patent for “flexible electronic devices.” Based on the illustrations, they look a lot like the same kind of technology that that smaller companies use in their bracelet phones. 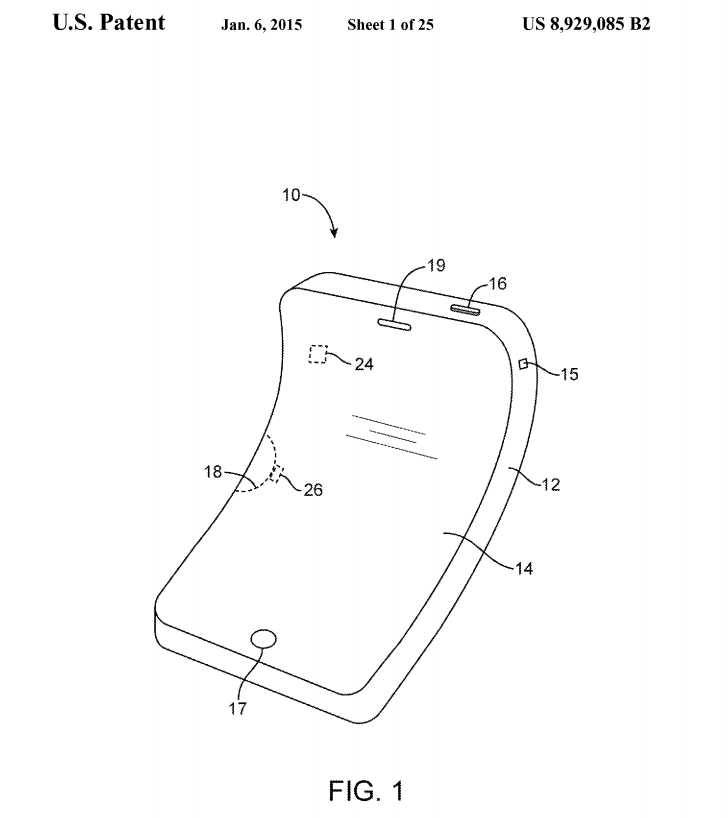 Samsung is also planning to release a bendable smartphone in 2017. Code-named “Project Valley,” the full details of the phone are rumoured to be announced next February.

The End Of An Era

The current landscape of bracelet phones is sparse — it consists mostly of crowdfunded promises, interesting prototypes, and intriguing patents. There’s nothing you could confidently call a smartphone killer.

Whoever produces the first commercially successful bracelet phone will take a significant chunk of the $425 billion smartphone market. What’s more, they’ll earn the same praise that Apple received when they announced the iPhone in 2007.

As it stands now, tech companies are still racing to create the first device that allows consumers to connect to the world entirely through wearables — without a handheld smartphone slowing them down.

Whoever makes the first successful bracelet phone will take a big chunk of the smartphone market.