At the Virtual Reality Summit 2016 in San Diego on Wednesday, Brian Blau, Research Vice President at Gartner, spoke about the developing market for augmented reality (AR) and virtual reality (VR). In his talk, he offered some predictions on where these technologies are headed, and why he suspects that AR and VR will combine into “mixed reality” devices by 2020.

According to Blau, virtual reality is further developed than augmented reality. He discussed where these technologies are on Gartner's “Hype Cycle” — a chart that represents the evolution most technology goes through before maturing. He placed virtual reality on the “Slope of Enlightenment” part of the cycle. This is the part of the hype cycle where a growing number of beneficial uses of the technology start to form, and more companies fund pilot programs.

Augmented reality, however, is still struggling through the “Trough of Disillusionment.” He estimates that augmented reality is roughly 12 to 18 months behind virtual reality.

“While I know the summit here is specifically on VR, I have to tell you we often treat AR and VR similarly,” Blau said. “There are enough differences, sure — but there are also enough similarities.”

“You have to remember that augmented reality and virtual reality are extreme or hyperpersonal technologies,” he said. “And ones that are going to have an impact on how you go about interacting with each other.”

Distinct Markets For VR And AR 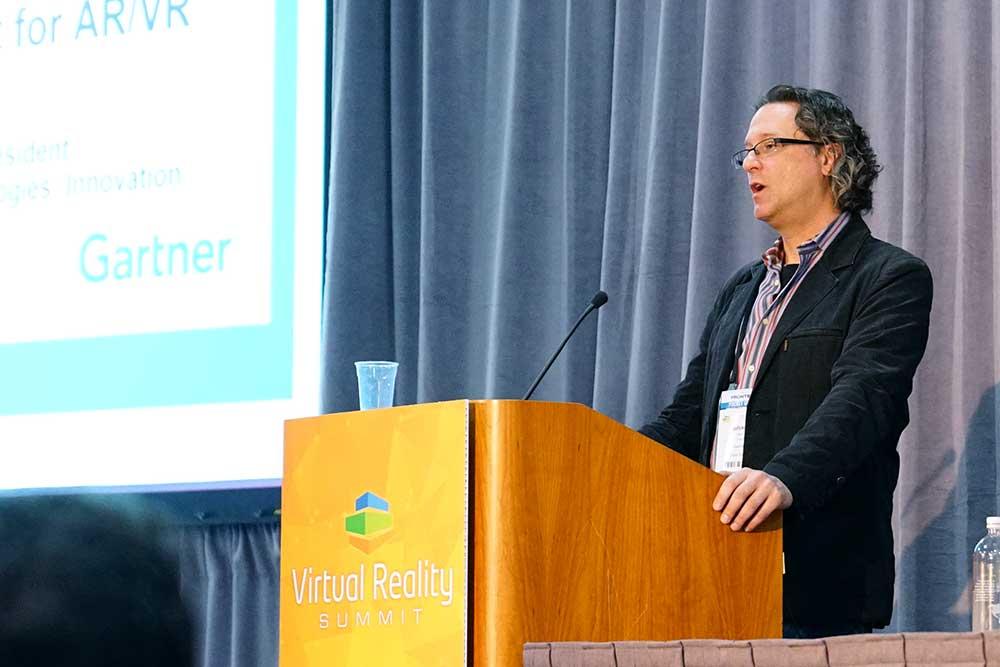 For example, the shipping and logistics company DHL uses augmented reality to improve warehouse operations. Augmented reality glasses can replace the use of handheld scanners that are normally used to scan shipments. They can also increase worker productivity by optimizing basic or error-prone tasks.

“Eventually, it will come to consumers,” he said. “We’re not exactly sure when or what the form factor will be. My prediction is over the next three to five years.”

Immersive technology devices just started to become available to consumers in 2016, and the quality of head mounted displays isn’t mature quite yet. He predicts that adoption will proceed at a modest pace through 2020. That same year, AR and VR will merge features and functions in the form of “mixed reality” devices.

We are going to start seeing these “mixed reality” devices “starting next year,” he predicted. .“But it’s going to become a lot more prevalent over the next three to five years. And then, all of a sudden, you’re going to have devices that have both capabilities. They may specialize in augmented reality or virtual reality, and bring the other one in.”

“While I know the summit here is specifically on VR, I have to tell you we often treat AR and VR similarly.”