By many accounts, 2016 wasn’t a great year for wearable tech companies. Pebble was bought out by Fitbit, smartwatch sales dipped dramatically in the third quarter, and many companies pushed back the release of their products.

These events suggest a downward trend in the industry — but Steve Koenig, Senior Director of Market Research at the Consumer Technology Association, forecasted a much brighter future for wearables at CES on Wednesday.

According to CTA’s projections, the global wearables market will sell around 184 million units in 2017, which is a 50% growth from the number of units that the CTA forecasted in 2016. Health and fitness trackers account for nearly half (47%) of that projected total, while smartwatches make up an additional 40% of the 184 million units. 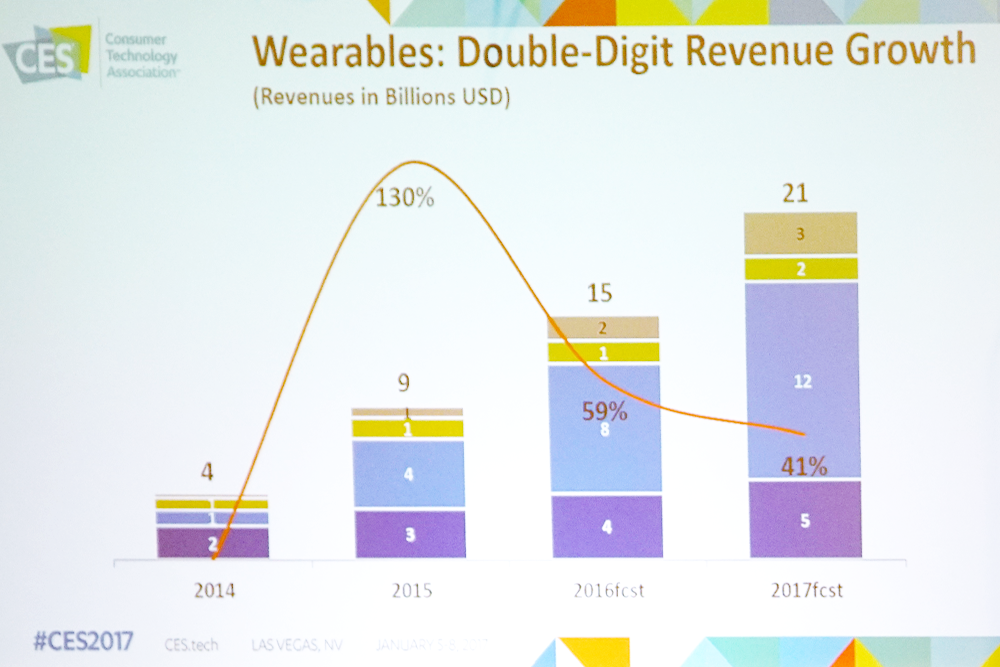 Naturally, increased sales will also lead to increased profits. The CTA forecasts a 41% growth in revenue within the global wearables market in 2017, which the organization projects will be around $21 billion total.

Related: Wearables Are Moving Beyond The Wrist

Koenig said the wearables category as whole is starting to expand because the industry is a “global phenomenon.” That global influence is evident in many regions around the world.

Wearables and audio devices are among the fastest-growing products in the US, Mexico, Canada, India, and other emerging parts of Asia. China is considered a fully developed tech market by the CTA, but Koenig said that countries like Japan, South Korea, and others within developed Asia are poised for a broader adoption of wearables.

Perhaps the only thing working against wearable tech’s resurgence in 2017 is the leveling off of global tech spending. Koenig said unfavorable conversion rates, lower retail prices, and political and trade uncertainty are a few of the reasons for the CTA’s lower projection.

We’ll just have to wait and see the full impact that these factors have on the industry.

The wearables category is starting to expand as a whole because the industry is a global phenomenon.