When we think about augmented reality, it’s always framed in the future. We wonder what problems AR will solve and what it will look like — but really, augmented reality glasses are already here. They aren’t hitting store shelves anytime soon. Instead, they’re headed to work.

At CES on Thursday, augmented reality company DAQRI debuted their smart glasses alongside Intel’s exhibit. They’re a curious combination of rugged hardware and sleek design, and they usher in an impressive range of applications for augmented reality in factories and industrial settings. 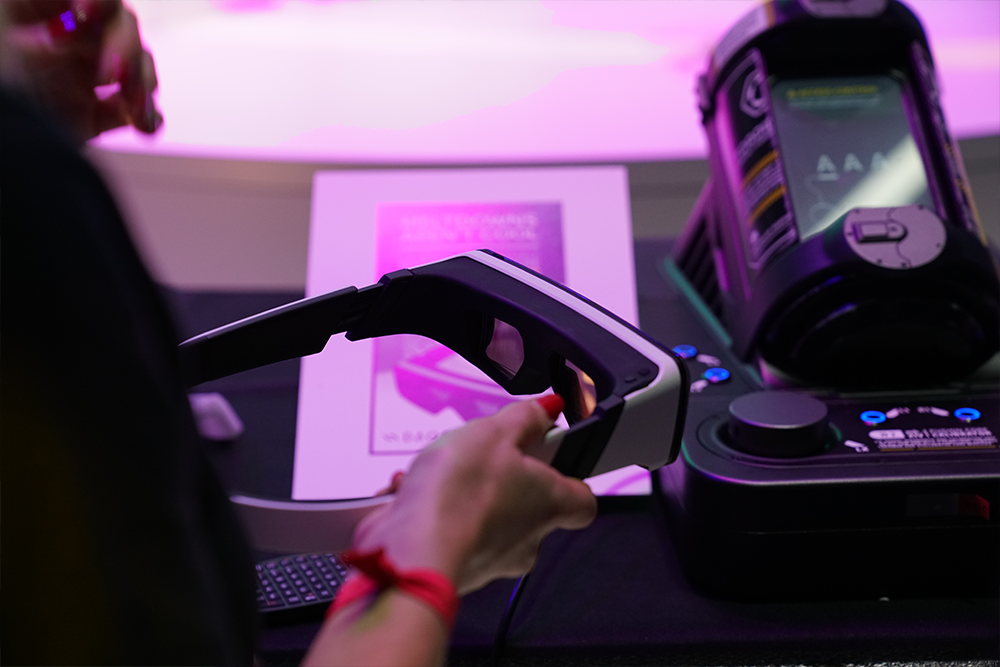 Related: These Smart Glasses Are Paving The Way For Augmented Reality

Regan Wynne, Director of Marketing and Communications, described the product at CES in this way: “We’re showcasing DAQRI Smart Glasses, our newest product that is bringing AR everywhere.”

How will DAQRI’s line of products take augmented reality from factories into the mainstream? Here’s why innovation starts at work — and why DAQRI is at the forefront of AR’s evolution. 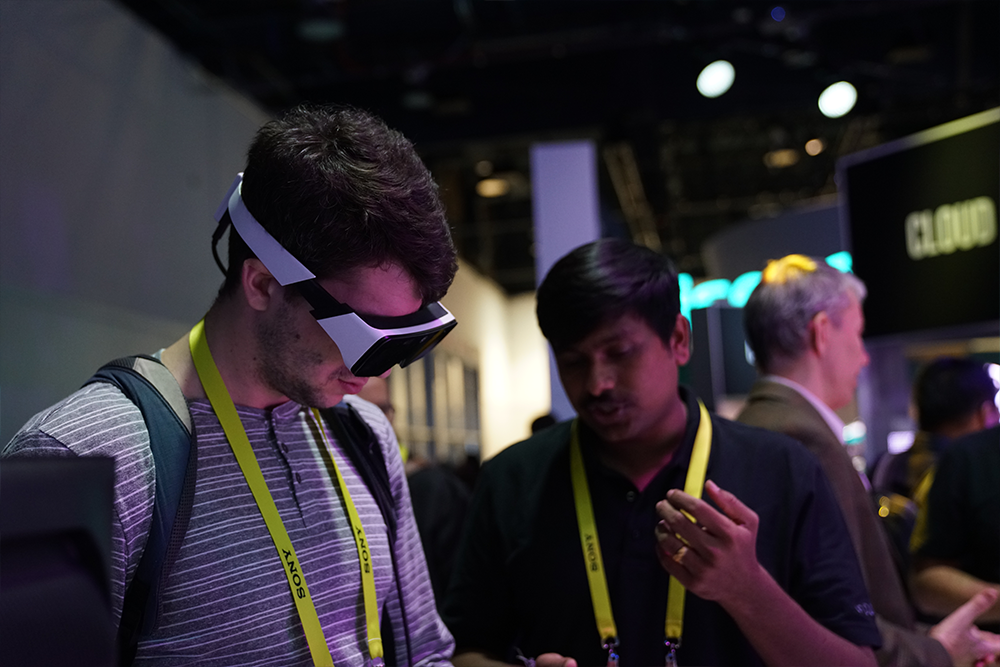 Wynne explained that the company’s products are primarily designed with industrial and enterprise applications in mind. “But the wearables you’re seeing here, specifically the glasses, these are designed for taking work into the future,” he said.

Simply put, the Smart Glasses are work tools. They visualize data, provide workers with guided work instructions, and feature remote expert capabilities, which allow co-workers to see from their colleague’s point of view. They’re supported by a 6th Generation Intel Core M7 Processor and RealSense camera, and they’re intentionally designed with comfort in mind — weight is evenly distributed throughout the device to keep extra strain off a person’s shoulders during long shifts.

Wynne shared a few potential applications for the DAQRI Smart Glasses, particularly in conjunction with the company’s AR Smart Helmet. “The glasses are now part of the design phase in a construction project, where the engineer is looking in a photorealistic way at his workstation, and then gives that data to the worker in the helmet who is working the field to build it,” he said. “Then the inspector at the end can come through and make sure that everything is done right and see it on the glasses again so it moves seamlessly between those different devices.”

Why Innovation Starts At Work 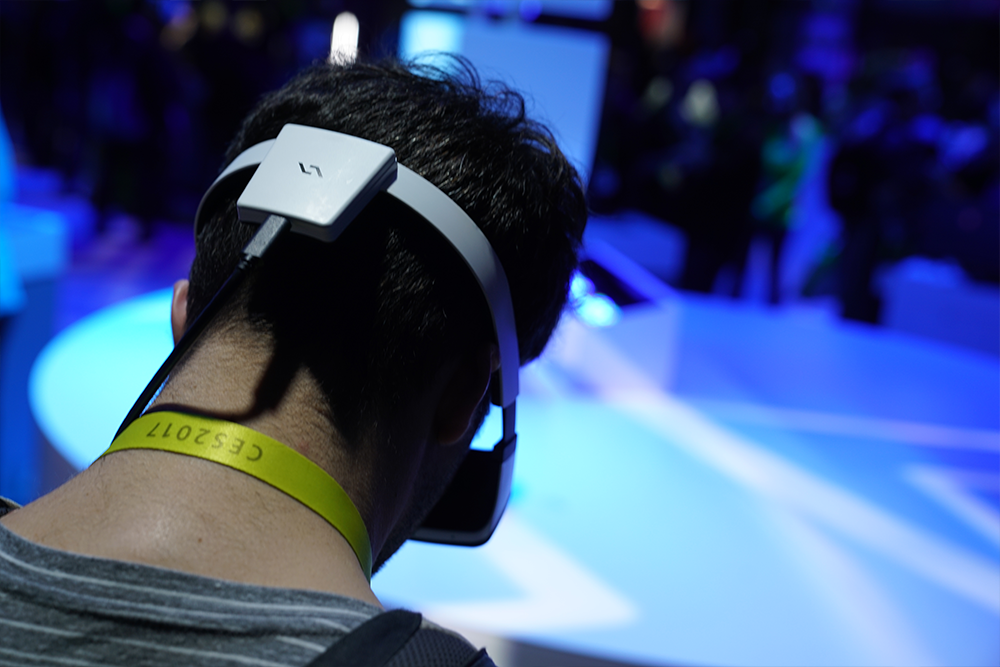 DAQRI’s website hints at a compelling use of the company’s AR glasses: medicine. In a visualization, a medical professional oversees a surgery through the lenses of a surgeon wearing Smart Glasses. The technology is poised to thrive in aviation and aerospace, architecture, and lean manufacturing, but the company has also left use-cases appropriately open-ended. “We know that innovative minds all over the world will find unique and amazing ways to utilize DAQRI Smart Glasses,” the company wrote.

And adoption won’t be difficult: Wynne stated that the glasses are intuitive to use. There’s a learning curve, sure — but it only takes a few minutes to understand. “We use gaze-and-dwell, so you look at the thing you want to interact with, and it interacts with it,” he said.

Related: Gartner Predicts Virtual And Augmented Reality Will Merge By 2020

However, Wynne stated there may be some growing pains on the corporate level. “I think organizationally there’s going to be some adapting to how they can figure out where this goes into their workforce. How do they change from the old way of doing things and then embrace the new way of doing things?” he said. “That takes a little bit longer, but that’s what the early adopter program we have for both helmet and glasses are designed for — to help those customers figure out the best way to use AR in their workforce.”

DAQRI recently released a case study involving its AR helmets, which were used by Mortenson Construction in partnership with Autodesk. On the construction site, workers were able to look up and see air ducts visualized in the construction, and that it “was the moment I realized we were really, really here,” Wynne said.

Smart glasses like DAQRI’s product are well-positioned in a quickly evolving world. Even though augmented reality technology is available now, it’s poised to change and improve rapidly in the coming years — and it all starts in offices, work sites, and on the field. “Big change happens in the workplace,” Wynne said. “It starts with computers on your desk or giant briefcase cellphones that you’re carrying out into the field. Then they turn into bricks that you’re carrying around in your car,” transforming into slim phones that slip into our pockets and become ubiquitous parts of our lives.

“It starts at work. It moves into every aspect of our life,” Wynne said. “And I think that if there’s one thing that I’d want as a takeaway for DAQRI about bringing AR everywhere, it’s that you’re just now starting to see the beginning of how that’s going to proliferate.”

“These are designed for taking work into the future.”