It’s easy to take an innate gift like sight for granted, but many people don’t have that luxury. Simple tasks like reading, walking, and making coffee are often difficult, if not impossible, for the visually impaired.

One company wants to ease that burden with a pair of electronic glasses that help the legally blind see.

These glasses — called the eSight 3 — consist of a high-definition camera, two OLED screens that act as lenses, and a connected remote control. As the camera captures everything in front of the user, built-in algorithms enhance the images and display them on the screens with virtually no lag.

“You’re talking about image processing software that’s extremely advanced — supercharged is a great way to describe it — that actually enhances the visual capability of the person,” said Brian Mech, President and CEO of eSight Corporation.

Electronic Glasses From The Future

As a popular character in the Star Trek: The Next Generation TV series, Geordi La Forge forecasted what a seeing device for the blind might look like. Almost 30 years later, eSight’s electronic glasses have brought that vision to life.

While the company’s glasses can’t help those with total vision loss, the eSight 3 can help the majority of legally blind people.

According to Essilor, legal blindness is defined as a visual acuity of 20/200 or worse in your best-seeing eye, or a peripheral vision field that is limited to only 20 degrees.

Mech said roughly 86%of people in the world that are considered blind aren’t completely blind — they’re legally blind. Of that group, 75%-80% of eSight participants are responders. In other words, the glasses help them see better.

This response rate differs depending on the user’s condition, but Mech said the company has had success helping people with impairments ranging from glaucoma to traumatic brain injuries.

However, because the electronic glasses change the way light is presented to the retina, Mech said that the eSight produces a better response in retinal disease than it does in injuries to other areas, such as the optic nerve or the visual cortex.

“When you look at just diseases of the eye, if they’re considered what’s called macular pathology of the eye — which is any disease that results in central vision loss — that’s where we do the very best,” Mech said. “We’re kind of in the 90% success range if it’s a macular disease.”

Mech never discourages anyone from trying to improve their quality of life, but as a cutoff line, he said if someone’s visual acuity is worse than 20/1200, eSight is unlikely to be able to help.

Related: Smart Glasses That Are Paving The Way For Augmented Reality

The New And Improved eSight 3 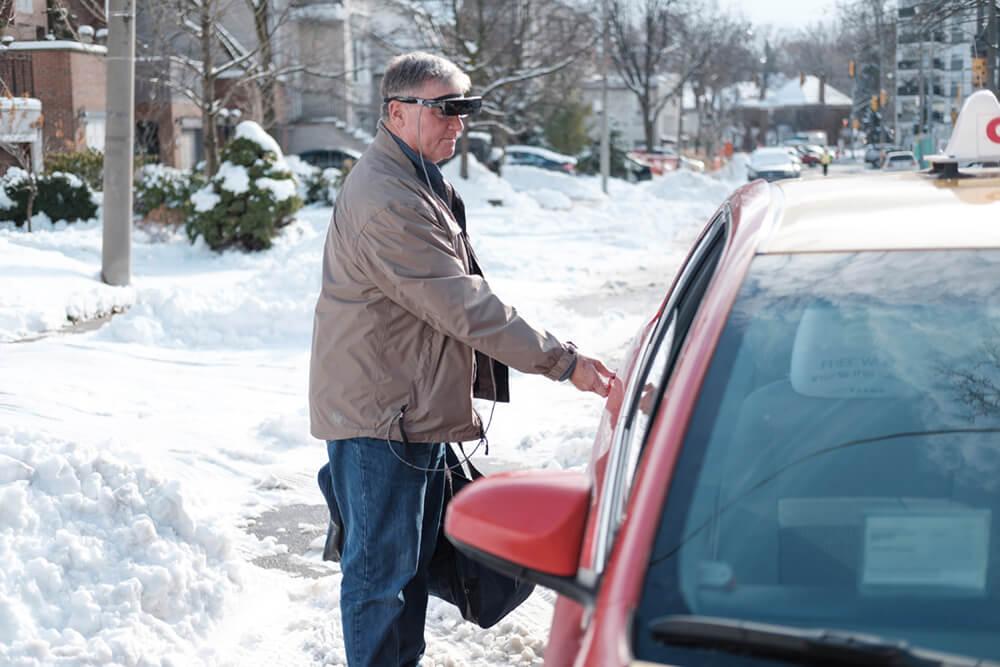 A variety of upgrades make the eSight 3 even more appealing than previous models.

The electronic glasses weigh around 4 ounces (a little over 100 grams), have a 6.5-hour battery life, and include features like WiFi, Bluetooth, a microphone, a speaker, and a HDMI plug-in. These extras let you display apps from your phone on the OLED screens or watch a movie through the glasses.

Users also have plenty of ways they can manipulate the images they see through the remote control, including:

Mech said the average responder typically achieves a visual acuity of 20/25 with the eSight glasses, but some participants have reached clarity levels as high as 20/12.

As you might expect, all of this advanced technology comes with a pretty hefty price tag. The eSight 3 is significantly less expensive than the company’s previous model ($15,000), but it still costs $9,995. The company understands that this figure is probably outside the budget for most consumers, so eSight offers a variety of assistance programs — including a personal advocacy program — to help people secure the appropriate funding.

While the eSight 3 already boasts impressive technology, Mech’s expectations for future devices hint at improvements that may even eclipse the imagination of Star Trek.

“I don’t know if this is our very next step, or the step after, but [the device] is going to look either exactly like, or very close to, just a regular pair of glasses,” Mech said. “And I think, ultimately, we can get the technology down to just a contact lens.”

The average responder reaches a visual acuity of 20/25 with eSight's electronic glasses.