How Does Fitbit Calculate Active Minutes?

For example, if you go for a jog, then that activity will be logged as active minutes. But what goes into that calculation, and how does it impact your overall fitness goals?

How Does Fitbit Calculate Active Minutes?

Your Fitbit calculates active minutes through a metric called metabolic equivalent of tasks (METs), also sometimes just called “metabolic equivalents.” METs measure the intensity of a particular physical exercise by comparing against a base rate.

The base rate is roughly an average person’s resting metabolic rate, which is an estimate of your body’s caloric burn when you are simply sitting still. Going for a leisurely walk, however, might have an MET value of 2, since it requires you to use twice as much energy as you do when you rest.

Your Fitbit estimates METs by calculating your physical activity and heart rate. Anything above an MET value of 3 counts as “active minutes.”

Note that your Fitbit will only calculate active minutes if you keep up the vigorous physical activity for 10 minutes at a time. Older versions of the Fitbit software included all amounts of physical activity. But starting in 2015, Fitbit only logs active minutes that last 10 minutes or more. This change was designed to keep in line with the Center for Disease Control’s recommendation that exercise can be performed in 10-minute blocks.

Does All Exercise Count Towards Active Minutes?

No. Active minutes are only added to your daily total when your Fitbit automatically detects a MET value of 3 or more for a period lasting at least 10 minutes.

Your Fitbit won’t always accurately calculate your active minutes. There might be times that you will work up a sweat, but your tracker will log very few active minutes, or none at all. That’s because your tracker might have a harder time recognizing physical activity that doesn’t involve taking steps, such as weightlifting or doing yoga, as active.

Fitbits that include a heart rate monitor are more accurate, since they take increases in heart rate into account. But Fitbits most accurately record active minutes for walks and runs.

The CDC recommends that you are active for at least 30 minutes every day. Consequently, your Fitbit app is preset with an active minutes goal of 30 minutes. But what happens in situations when 30 minutes isn’t best for you?

Perhaps you’re recovering from an injury and want to decrease your goal, or you want to get a little more ambitious and increase it. Fortunately, every Fitbit comes with the ability to change your activity level. 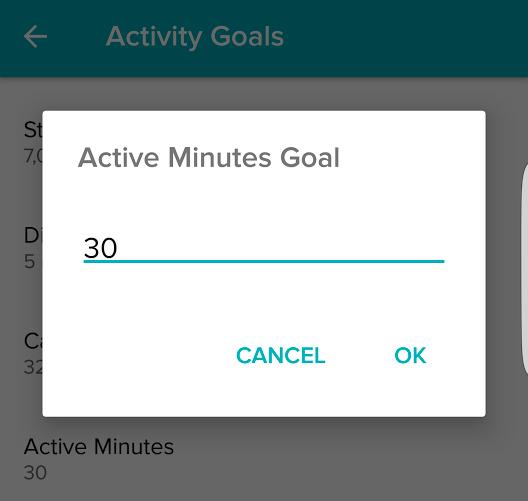 In your Fitbit app, simply go to “Account.” Under “Goals,” select “Activity.” Then select “Active Minutes,” and you’ll be able to set whatever active minutes length you prefer.

Fitbit only logs active minutes that last 10 minutes or more.