I’m not going to lie — I never thought Google Cardboard VR apps would make my heart pound and my fight-or-flight response kick into overdrive.

But that’s exactly what happened in the middle of my workday on a sunny San Diego afternoon. I was standing in our office with fluorescent lights overhead and a rug below my feet, but I was staring at the dark, shadowy corners of an empty room, listening to peals of laughter and wondering where the hell it was coming from.

I was playing Sisters, a virtual reality (VR) game available for Android and iOS with Google Cardboard. It’s one of many apps that illustrates just how cool VR really is — and how far it can go in the near future.

In May 2015, Google announced full support for iOS with Google Cardboard. Along with some structural updates (like the ability to accommodate larger screen sizes), Google Cardboard has become one of the most accessible means for people to experience virtual reality — without having to shell out $100 for a Samsung Gear VR or $599 for an Oculus Rift headset.

The basic Google Cardboard model, which is literally made out of cardboard, will set you back $15. You can purchase higher-quality models around the range of $29.99, which will blot out ambient light for a more immersive experience.

I tried out Google Cardboard using the D-Scope Pro because it was available on Amazon Prime — I don’t like waiting more than two days for shipping, and it’s currently on sale for $16.99. The initial build was intimidating; you essentially get a folded piece of cardboard with numbered tabs to fit together. Until I caved and watched an instructional video on YouTube, I felt like I was assembling IKEA furniture blindfolded.

However, once I had successfully put the viewer together, I explored some seriously incredible Google Cardboard apps. The experience is nowhere near as immersive as the Samsung Gear VR, and you won’t have access to as many cool apps. But for the price, the cardboard VR experience is well worth your time.

Here are some of the best apps to explore with your Google Cardboard headset.

Free, Android and iOS: Of course VR horror games exist. Sisters is one of the suggested downloads in the official Google Cardboard app, and with good reason — it’s freaky! Using both VR and headphones, the game uses look-based controls, binaural and directional audio, and a responsive environment to throw you into your own personal horror film.

Sisters is especially exciting because it proves just how well those tried-and-true elements of horror (unsettling sounds and a fear of the unknown, natch) can translate to a VR setting. Directional audio is an especially nice touch that makes this a must-download Google Cardboard app. Just make sure you wear it in a dark room with some good headphones to get the full, terrifying experience. 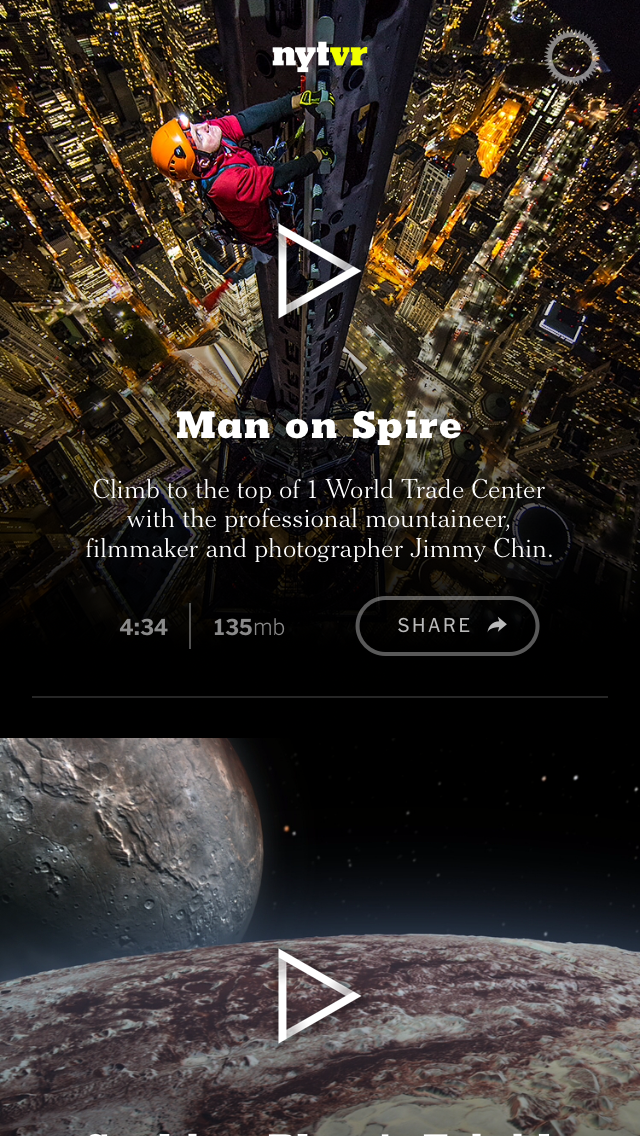 Using immersive video, NYT VR uses Google Cardboard to place you inside stories reported by New York Times journalists. “Man On Spire” is a great place to start — you’ll climb to the top of One World Trade Center with Jimmy Chin, a professional mountaineer, filmmaker, and photographer. The views from the top are impressive, but be careful when you look down (especially if you’re afraid of heights).

Free, Android: Have you ever seen those scale replicas of how large and far apart the planets in our solar system truly are? The scale of our moon relative to other, larger planets is insane — but imagine if you could actually place yourself in front of those celestial bodies and feel properly miniscule. Titans of Space makes that existential realization possible.

In this app, you embark on a self-guided tour of the solar system — and beyond. In the process, you can view approximations of how far apart the planets are, and what Saturn’s rings look like. In the latest version of the app, you can even play with a gravity probe launcher!

Free, Android and iOS: One of the worst parts of public speaking is that the only way to get better is to actually, you know, speak in public. But this Google Cardboard VR app places you in a variety of public speaking settings — a job interview, a boardroom presentation — within the confines of your phone and headset.

As an added bonus, the people in the audience nod, twitch, type, and even text like a real human audience would. Plus, you can use a timer within the settings to keep track of your speech’s time. Cool your nerves and perfect your public speaking skills without actually dealing with people — it’s a win-win. 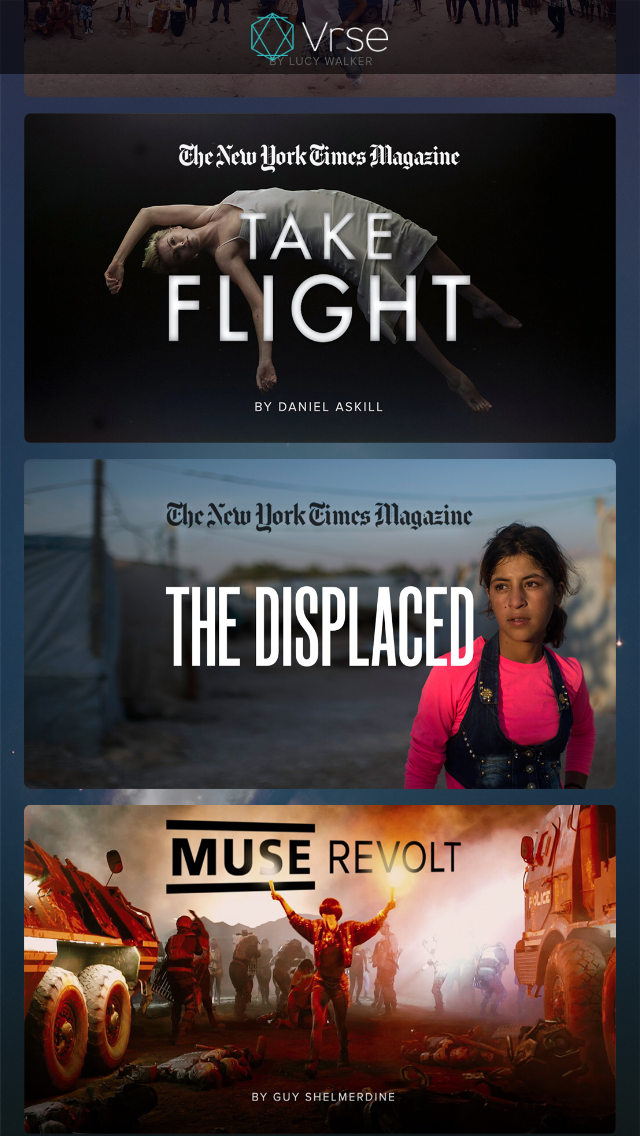 Free, Android and iOS: One thing you should know about me: I goddamn love Muse. Imagine my surprise when I was transported to a dystopian future, watching Matt Bellamy jam out to “Revolt” while a proper rebellion played out around me. It was THE BEST.

Vrse is a curated collection of short films and music videos. While I’m probably just going to keep watching “Revolt” on repeat all day, you can also take a dive into the live audience of Saturday Night Live, or watch Vice’s first-ever VR news broadcast with the Millions March in New York City.

Free, Android and iOS: Specifically, we’re talking about the official YouTube channel 360° Videos. You’ll find the Google Cardboard-compatible videos under “VR Videos” — everything else can be viewed without a headset.

But you’ll want to drop everything and immediately view “Eating Virtual Tacos With Danny Trejos,” a virtual reality experience that allows you to … eat tacos with Danny Trejo. I don’t know why “Trejos” is plural in the video’s title, but don’t you want some tacos right now? Of course you do. And now you can have some! Virtually. 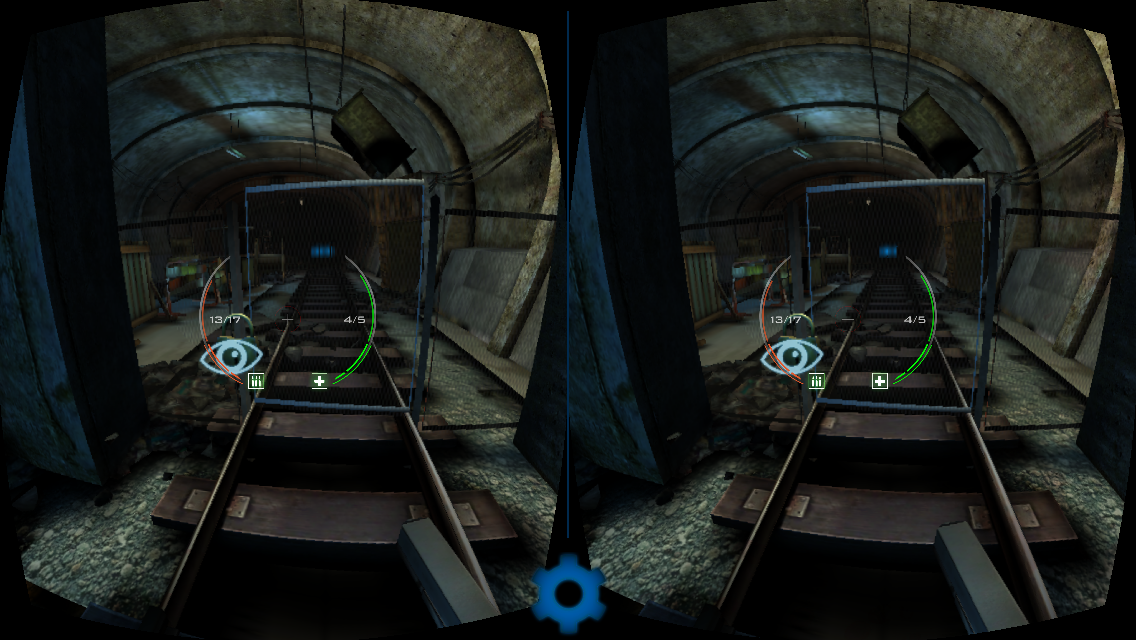 $0.99, Android and iOS: There are plenty of zombie shooter games on the VR market, but this one gets a special nod because it isn’t fussy, the graphics are solid, and the look-to-shoot feature works well. You get a free demo for the first portion of the game and have to buy it to continue. But if you feel like mowing down some zombies in a post-apocalyptic subway, this is a great choice.

Note that this game is developed by VR headset company Fibrum, but it is compatible with Google Cardboard.

Free, Android and iOS: To really appreciate this app, you have to understand the difference between virtual reality (VR) and augmented reality (AR). While VR places you in a simulated world, AR overlays graphics onto the world around you. And if you’ve ever wanted to see dinosaurs walking around your living room — and you aren’t willing to wait around for Magic Leap — Dinosaurs Everywhere! is a fun way to watch Pterodactyls fly around your ceiling fan.

Here’s how it works: in VR mode, the app uses your phone’s camera to superimpose dinosaurs into your surroundings. It isn’t perfect — all of my dinosaurs were walking in mid-air, which is a sentence I never thought I’d write. But the app offers a good time with just the right amount of silly. Outside of VR mode, you can explore virtual dino worlds and pretend you’re in your own version of Jurassic Park.

Did we miss any of your favorite Google Cardboard apps? Let us know in the comments.