Heidi Dohse, Senior Program Manager at Google Cloud Platform, kicked off the 2016 Wearable Tech Show with a discussion of the real-world impacts that wearable tech has on medical patients.

She opened with a personal story about her 30-year journey as a heart patient.

The Journey To Health

At 19, Dohse was an active multisport athlete.

However, she was never able to take her pulse manually the way her peers could — so she would simply make up numbers when her coaches asked. When she had an EKG as part of the prep for knee surgery, it was discovered that Dohse suffered from a rare heart arrhythmia. Unknown to anyone, her rate rate was reaching a dangerous 270 beats per minute.

As technology improved, she said, “My ability to recover, and to not be a victim of heart disease, has also improved.” 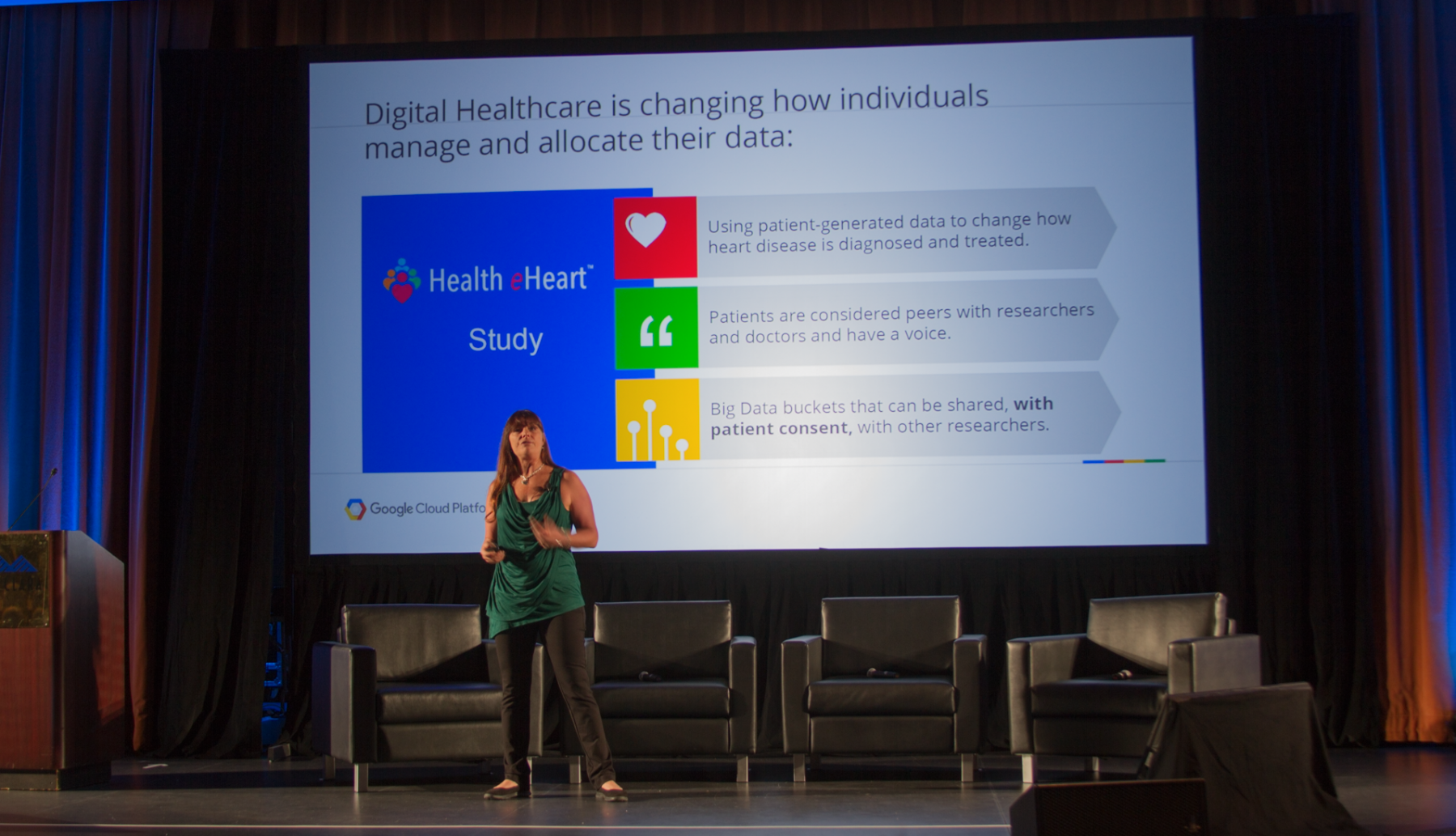 In 1983, she underwent an experimental procedure that left her entirely dependant on a pacemaker. As an early adopter of the technology, she suffered complications such as viral cardiomyopathy and built-up scar tissue, which had to be surgically treated.

Determined to get her life back, she resolved to find a way to start cycling again. In order to accomplish that, she needed data that helped her to communicate with her doctors — information that let her “get them on board with the life I wanted to live.”

She has used seven pacemakers in total. Her current device was developed by Boston Scientific and collects data on every heartbeat, checks for abnormal rhythms, and monitors voltage settings and battery life. It can also transfer data to her doctor via WiFi.

“Back in the ‘80s, I had to count every heartbeat,” she said. She rarely left the house.

For Dohse, the most significant impact that wearables have on patients is that they provide a real-time “window” into how their body functions. This can “short circuit that fear and anxiety” that often accompanies heart disease.

Beyond the benefits for medical analysis, this level of technological advancement allows Dohse to feel safe. Previously, she suffered from panic attacks because she was uncertain how well her heart or pacemaker was functioning. Now she can look at her wrist and know that everything is working as intended.

Thanks to this technology, Dohse is now a competitive cyclist who races mountain bikes all over the world.

Dohse is currently on the steering committee of the Health eHeart study, a project of the University of California, San Francisco. Their goal is to get heart patients to share their patient-generated data, including data from wearable devices, doctor visits, and clinical research. That would allow researchers to have a large bucket of data to analyze.

“Well, what about HIPAA?” Dohse asked. “What about privacy?”

She strongly believes that heart patients are incentivized to provide this information to researchers, since the the quality and length of patient’s lives are dependent on the data that researchers can access. “I’m happy to share my data,” she said. “The thing is, I just want to be valued for that. I want to know who’s using it and why.”

Dohse works with the Google Cloud Platform to provide the infrastructure to manage and store this data. That includes fully trained, easy-to-use machine learning models. An “analysis engine” can provide smarter data to researchers, health providers, and patients. This allows people to become more than just patients: they can work with their doctors to make better healthcare decisions together.

As a lifelong heart patient, Dohse says that she has waited a long time for the technological pieces to come together, and they’re finally here. Data-collection devices and tech infrastructure can now empower patients and enhance research opportunities.

"It is not just about how 'I feel,' but having actual data points to support what is or is not going on." @hdohse #WTS2016 #health

However, she said that the work is not over. Dohse believes in the near future, doctors and patients will be able to completely customize healthcare using genomics data and proactively diagnose health issues before they become dangerous and expensive.