How Does Sleep Tracking Work On Fitness Trackers, And Is It Accurate?

One of the most startling things you’ll discover when you start using a fitness tracker is just how little sleep you actually get. While you might think that you get a full eight hours of sleep a night, your Fitbit or other tracker might claim that there’s a good reason you always feel a little tired during the day.

But how can you trust those devices? And how can something that is attached to your wrist track your sleep, anyway? To understand that, you need to understand how sleep scientists do their work.

If you were to ever visit a sleep scientist and ask them to see if you’re sleeping normally, they would took a close look at your shut-eye through a medical technique called polysomnography (PSG). This is actually a combination of several different techniques.

The scientist would hook you up to all the electrodes required to monitor your body functions, then monitor you as you fell asleep in a medical office or hospital. After you wake up, all of the data collected during your visit to dreamland would be used to determine your sleep quality and to diagnose any possible sleep conditions.

Obviously, a fitness tracker you wear on your wrist can’t duplicate modern medical equipment that uses electrodes attached to your body. (At least, not yet).

So how do they work their magic?

Fitness trackers use a significantly less complex technique called “actigraphy.” By using accelerometers that detect movement, your fitness tracker guesses whether you’re asleep or awake. If you’re lying completely still, your tracker assumes you’ve dozed off. If you’re up and moving, it assumes you’re awake.

Actigraphy has been used for decades by scientists. But they recognize that it isn’t quite as accurate as PSG. 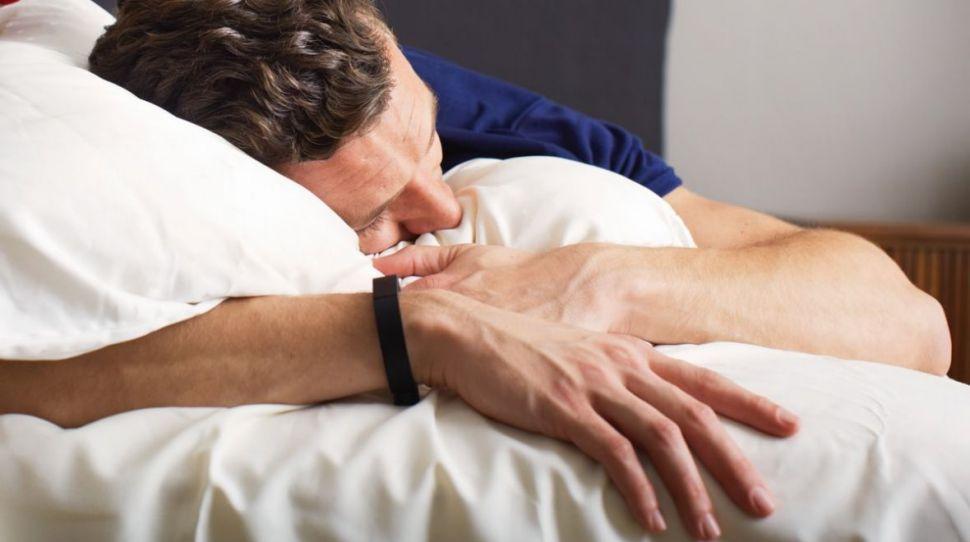 How Accurate Are Fitness Trackers At Detecting Sleep?

Sleep tracking in fitness trackers used to be pretty bad. A study in 2011 discovered that Fitbits overestimated sleep by 67 minutes on average. In fact, Fitbit faced a lawsuit in 2016 because the plaintiff alleged that Fitbit’s sleep tracking claims were misleading. The company has since revamped the sleep tracking features by working with scientists from Stanford, Johns Hopkins, and the University of Arizona.

It appears to have paid off. A 2017 study on the Fitbit Charge HR found that it is accurate enough to be used as an actigraph for medical research.

Recent sleep tracking studies on other trackers have found them to be effective. A 2015 study found that the Jawbone UP generally overestimated sleep time, but it was pretty close to polysomnography.

However, while modern fitness trackers are more accurate at detecting sleep than they used to be, they still can’t match the accuracy of PSG. This is particularly true when it comes to “light” and “deep” sleep.

In stage 1, you drift in and out and can be woken easily. In stage 2, eye movement stops and brain activity starts to slow. In stage 3, your brain starts to mostly produce delta waves. In stage 4, your brain produces delta waves almost exclusively. In REM sleep, your breathing rate increases, your eye move around quickly, and your muscles are temporarily paralyzed. During sleep, healthy people cycle through all five stages, going from stage 1 to REM sleep and back again.

Sleep trackers try to simplify this data by categorizing your sleep cycles as “light sleep” and “deep sleep.” However, since accurately detecting sleep stages requires brain and eye movement, scientists say that data is probably not accurate.

According to Hawley Montgomery-Downs, a sleep researcher and Associate Professor at West Virginia University, “You move the same amount whether you're in deep sleep or lighter stages of sleep.” Therefore, the accelerometers in fitness trackers aren't useful in determining which sleep stage you are in.

Sleep is more complicated than it looks, and accurate sleep analysis still requires a lot of fancy equipment operated by medical equipment. For most people who just want to get a rough idea of how much they sleep each night, modern fitness trackers do a good enough job of telling whether or not you’re spending enough time dozing.

By using accelerometers that detect movement, your fitness tracker guesses whether you’re asleep or awake.