Interview: How Hykso Helps You Train Like Muhammad Ali

Think of Y Combinator as a Silicon Valley boot camp for startups. Only companies that show the seedling of promise are able to attend, where they receive necessary seed money, opportunities to network with the brightest minds in tech, and — most importantly — advice from seasoned entrepreneurs and investors.

For boxing wearable Hykso, that advice entirely changed their company’s trajectory. I spoke with CEO Khalil Zahar about Hykso’s technology — and why you might find it at a gym near you this fall.

In July 2013, Hykso started as a company in Montreal with one vision: to make boxing training more efficient. “We think there’s a code that has not been cracked, especially in fighting,” Zahar tells me over Skype. “We think we can enrich technology to get way more motivated and have way more intense training sessions. You’ll know when it’s time to rest, and know when it’s time to push harder.”

The sensors are small enough to fit inside a fighter’s hand wraps or glove, and they’re designed to measure punch speed, punch count, striking intensity, punch types, and combos.

For a professional fighter, that data is vital — especially if they reach any plateaus during training. “It’s going to show you when you’re not reaching the levels you should be reaching,” Zahar says.

That data could build stronger, healthier athletes who train more effectively. Currently in its beta version, Hykso gives fighters an objective to hit for a specific day or training session. Plus, they can monitor their stats for any signs of overtraining. “If they see that their volume and speed didn’t reach the peak they’re supposed to hit … they would realize it’s either an injury or overtraining,” Zahar says. “It gives them the objective feedback that was previously very hard to get.”

Overtraining used to be measured by feel: a broken rhythm, reduced endurance, or mental roadblocks. Now, though, that feedback can come in the form of a smartphone app — or projections on an LCD screen.

At first, Hykso was intended for pro fighters and prosumers (i.e. amateurs who buy pro-level gear). But everything changed after Y Combinator, which shifted the company’s focus toward one goal: selling the product to as many people as possible.

“We’re going after the consumers who are boxing for fitness. The insight we got is that people don’t want to put some devices on in the hope to see progression data. What they want to see is live feedback.”

That idea makes immediate sense in a landscape of instant gratification. To meet that need, Hykso created a gym experience for people who want to box for fitness, not necessarily to become the next world champ. 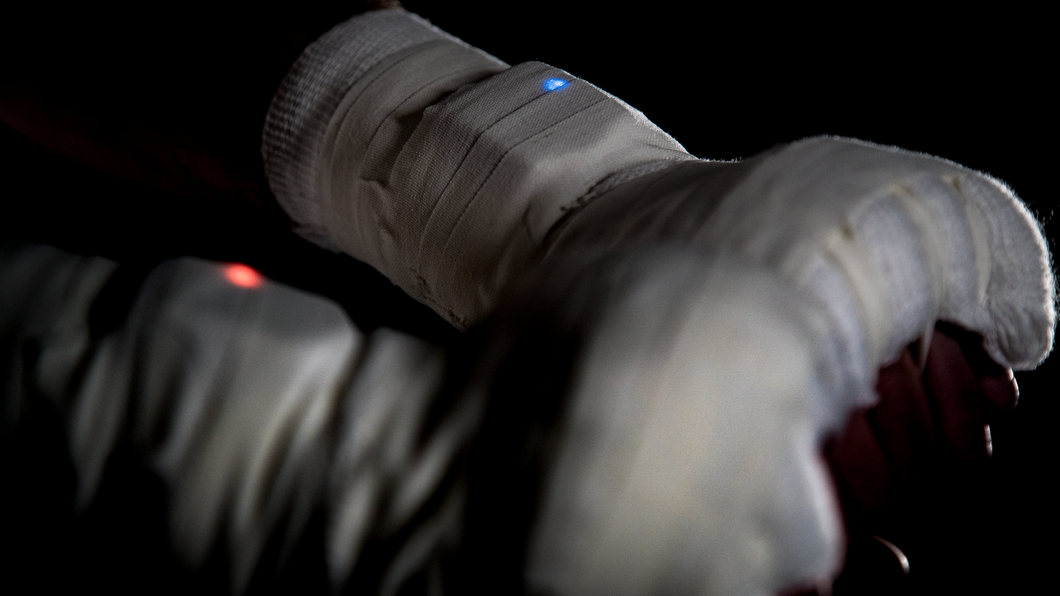 The company is currently partnered with seven gyms nationwide, where Hykso’s punch data can react in real time — ideally, on a large LCD screen for gym-goers to view.

“As they’re training, they get to see how many punches they threw and what goals they get to shoot for the next round,” Zahar explains. “They get to compete against each other in a context where they normally couldn’t compete. Those people don’t want to enter the ring and get punched in the face.”

Instead, they have two things to focus on: their personal stats and how hard other people in the class are pushing themselves. Because of that sense of competition, the software naturally invites a social component in group boxing classes: “It drives people to work way harder during training sessions, and it gives them a way to monitor their progress.”

But instead of weekend warrior challenges and move alerts, Hykso’s tech is designed for fighters and hobbyists alike.

There’s definitely a learning curve with Hykso’s data — users need reference points in order to understand what it means to punch a certain number of times per workout. “The most successful implementation of the tech is when the coach will use it for five different athletes that are sparring together,” Zahar says. “Then, it instantaneously creates five different data sets that you can look at.”

Zahar notes that Hykso isn’t just a gym gadget for coaches. It meets a need that is deeply ingrained in boxing training. “The coaches were already using clickers to count the number of punches, so they can implement the technology right away,” he says.

“For them, it’s like a painkiller more than a vitamin … they use it for counting the punches right away, and suddenly they don’t even have to hold two white numbers on paper or create Excel sheets to create progression data. Everything is just logged in.” 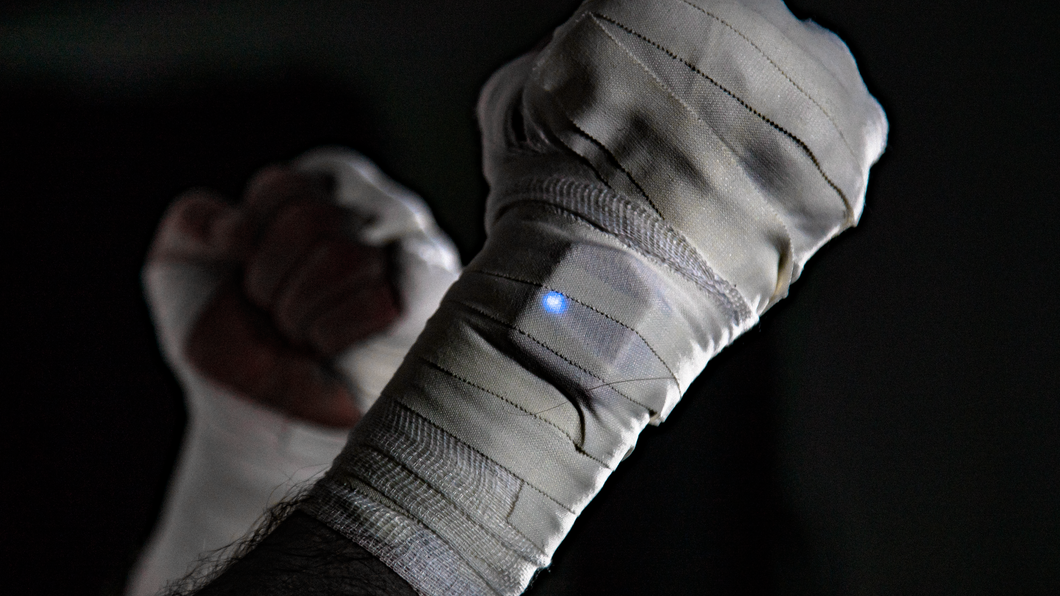 Zahar recognizes that Hykso isn’t the only punch tracking wearable on the market. StrikeTec, for instance, is a similar wearable punch sensor being used by the UFC. But unlike StrikeTec, Hykso doesn’t measure punch force.

“We don’t have this value that is inherent to force, the effective mass. So the measurements that we would do would be subject to error,” he says. “Motion sensors having force data, without using the effective mass in your calculation, is just scientifically wrong.”

Zahar explains that you can get a ballpark estimate of force by measuring speed and deceleration — but that ballpark can shift. It’s the difference between punching a bag, which has a measurable mass and predictable movements, and punching a living, breathing human being.

“When it comes to another athlete with a moving head that is sometimes coming forward, sometimes going backward … there’s all different types of scenarios where this calculation can lead to error,” he says.

Instead, Hykso refined its algorithm to filter out all the “garbage data, from blocks to people just clapping their hands together to goodbyes” — so, all the extra movements that can happen at a gym. Hykso can tell the difference between a punch and a fist bump, creating what Zahar believes is “the most accurate punch tracker on the market.”

In speaking with StrikeTec CEO Wes Elliot, one thing is clear: he deeply believes in the science behind his product and the need for wearables in combat sports. “There are many obstacles to new companies and products in this industry,” he writes over email. “The publicly available research just doesn’t exist for our technology/industry yet. We ran into the same problems in our first few years as well.”

Like Hykso, StrikeTec has conducted independent studies with universities to perfect its algorithms and data. At Wayne State University, StrikeTec partnered with Dr. Cindy Bir — a leading engineer who has compiled public research on Olympic boxers and athletes stretching all the way back to the ‘70s.

“We have had over six generations of sensors being used for years, with more than 1,000 sensors in play doing [research and development],” Elliot says. The end result of that research is a massive treasure trove of analysed data about what an athlete’s punch patterns look like. So, while he agrees that “measuring effective mass is extremely difficult,” he cites this example:

“Let’s say a newly designed car is driving around the track. If you can measure its horsepower, its time around the track, its acceleration in and out of the corners, and all the needed measurements along the way — wouldn’t it seem, with all of the car’s data and research on that track, that you would be able to closely estimate the car’s mass? Same with StrikeTec.”

According to Elliot, there will never be a product with 100% accuracy because “there is a lot of movement in the hand/wrist/arm versus the object being hit with similar variables,” but StrikeTec strives for the 90% to 95% accuracy zone. “I don’t try to think negatively about [other companies] or what they measure,” he adds, explaining that legitimacy is strictly dependent on the amount of research and development that has been put into analyzing as much data as possible.

“The more and more they do this, the better they will become. The industry needs movement, and we are just happy to be a part of it,” says Elliot.

Media Day continues with a "friendly" race between @ShakurStevenson & @NicoTheBoxer!

Who gets more hits in 30 secs? pic.twitter.com/1C0KDB5rNd

While Hykso has clear appeal for gyms with boxing classes, Zahar notes that pro athletes and pro coaches have been positive about Hykso’s technology. “The higher they are in the food chain, the easier it is to actually get them to see the value of the product.”

That’s why Hykso has been used by the US and Canadian boxing teams, UFC fighter Joe Lauzon, undefeated professional boxer Javier Fortuna, and expert trainer Hector Bermudez — among others.

Zahar has big plans on the horizon for his startup. “What we did with boxing, we want to replicate for mixed martial arts,” he says. “We think that we have a way that will transform the way people train for fitness in boxing and mixed martial arts.”

Hykso is currently on preorder for $149.95. It is scheduled to release later this fall, and Zahar looks forward to it. “We can’t wait to release that product for the world, and we think it has a lot of potential.”

They get to compete against each other in a context where they normally couldn’t compete. Those people don’t want to enter the ring and get punched in the face.