The Apple Watch Proves That Apple Is Rudderless Without Steve Jobs

“Deciding what not to do is as important as deciding what to do,” Steve Jobs told his biographer, Walter Isaacson. “That’s true for companies and it’s true for products.”

He put this idea into practice after he returned to Apple in 1997 after several years of absence. One of his first orders of business was hauling the majority of their product line to the slaughter house. At the time, Apple had a dozen versions of their flagship computer, the Macintosh. After enduring weeks of engineers explaining why they all existed, he finally reached his threshold.

Isaacson’s 2011 biography tells what happened next.

“Stop!” he shouted at one big product strategy session. “This is crazy.” He grabbed a Magic Marker, padded to a whiteboard, and drew a horizontal and vertical line to make a four-squared chart. “Here’s what we need,” he continued. Atop the two columns he wrote “Consumer” and “Pro”; he labeled the two rows “Desktop” and “Portable.” Their job, he said, was to make four great products, one for each quadrant.

Jobs’ radical focus on simplicity saved Apple from insolvency. During Jobs’ absence, the company lost direction and hemorrhaged money. For the fiscal year that ended when Jobs became interim CEO, Apple lost a bit over $1 billion. But for the full fiscal year of 1998, the company turned a $309 million profit. The next stage of the company is legend. It branched out into consumer electronics with the iPod, iTunes, iPhone, and iPad and became the most profitable company in the history of business.

But all of that foundational success might dissolve thanks to the relatively limp launch of the Apple Watch.

The Apple Watch is the first major product without any guidance from the company’s charismatic founder. It was the first test to see whether Apple could continue its track record of products that inspire devotion in die-hards and put profits in investors’ pockets.

So for, it’s not looking good. There are signs that Apple is reverting to early ‘90s driftlessness. For example, the Apple Watch actually has 20 different versions, though the difference in the majority of them is merely the band.

Apple co-founder Steve Wozniak says that he uses and enjoys the Apple Watch, but he’s baffled by the needlessly large product line.

The Apple Watch might signal that the company is regressing back to the darkest period of its history. 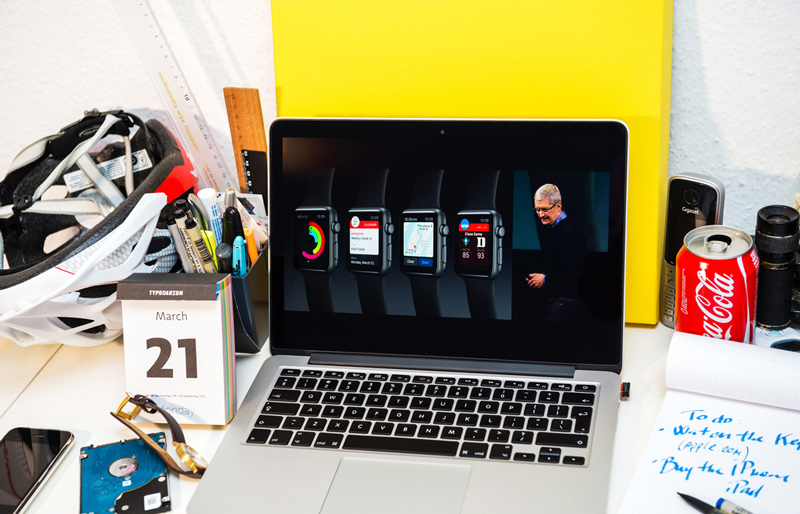 Curiously Difficult to Use

Apple’s legendarily intuitive interfaces have a learning curve that can be measured in minutes. As any parent who has made the mistake of not locking their iPad can tell you, even a toddler can navigate the interface to open and use the apps they most desire. That element is missing in the Apple Watch. In highly positive New York Times review written by Farhad Manjoo, he confesses that it took him three days to figure out how to use it.

First there was a day to learn the device’s initially complex user interface. Then another to determine how it could best fit it into my life. And still one more to figure out exactly what Apple’s first major new product in five years is trying to do — and, crucially, what it isn’t.

Though he sings the praises of how it improved his life in the review, it’s still curious that he had such trouble. If a seasoned tech journalist like Manjoo has difficulty with using the Apple Watch, then what hope do the rest of us (and our toddlers) have?

What about Apple’s competitive edge? Apple’s competitors were forced to keep close tabs on the greatest new innovations being churned out of Cupertino, wondering what new breakthrough they’d have to play catch-up with next.

But Apple’s latest product looks more like the company has put an Apple skin on old features.

When PC Magazine reviewed the watch, it said that “it doesn't offer much more functionality than, say, the Moto 360.” The reviewer, Evan Dashevsky, said that the single advantage it had was that it could vibrate in different ways depending on the notification. But getting this feature on an Android-based watch today is as simple as downloading an app.

Okay, but what about the hard financial numbers? Is Apple able to turn silicon into vaults full of cash like it used to?

Bizarrely (especially for a publicly traded company), it’s hard to get an official number on how many Apple Watches were sold in 2015. CEO Tim Cook claims that giving away definite figures would provide too much information to competitors. One has to wonder how warmly Apple’s investors accept this reasoning.

But this secrecy hasn’t stopped he the market analysis firm Canalys from offering a number: 12 million.

If accurate, that’s impressive. But it’s a far cry from the heady predictions of blockbuster sales made before the Apple Watch was launched. When financial firms made their predictions, they offered numbers from as optimistic as 60 million to as low as 10 million. The average number speculated was 22.6 million. That puts 12 million at the low end of the spectrum, regardless of how much market share the product has. Which makes it unsurprising that more than half of those surveyed by the advertising technology company Fluent think that the Apple Watch is a flop.

It gets worse. Analysts, who now have a more clear-eyed view of how well the watch will actually perform, expect that sales will decline by more than 25% in 2016. If true, it will mean that it will sell far fewer units in 12 months of 2016 than it did in eight months of 2015.

Apple’s extraordinary financial success has been based on two factors: its innovation and focused simplicity. It’s built into their business model. Economically speaking, the company has been a master of Schumpeterian rents. This is a kind of economic rent where an innovator can take advantage of the massive profits that are possible in between time when the innovation is released and when it turns into a standard-issue feature. That’s why iPhone was able to dominate at first, but its sales numbers declined as the smartphone category became increasingly crowded.

The Apple Watch is not a category-defining device like Apple’s previous products are. Without that Schumpeterian edge, Apple will have to become accustomed to more down-to-earth profits.

If the next iteration of the Apple Watch (speculated to be make its debut to developers in June) can overcome these barriers, return to its founding principles of simplicity, and offer a consumer experience like nothing else, then it will prove that it can innovate as well as it always has. Information about the Apple Watch 2 is scarce at the moment, but the most promising rumor is that it will be more self-sufficient than original. That indicates that Apple is trying to shed at least some complexity from the device.

But if it can’t separate itself meaningfully from the competition, then it will prove that Apple has started its decline from consumer tech innovator into a Samsung-like product factory. Or worse, a once great company that will see profits slide quarter after quarter. And that will put Apple in a worse position than it was in the ‘90s.

Because this time, a visionary founder won't swoop in and save the day.

The Apple Watch is the first major product without any guidance from the company’s charismatic founder.