Mental Health Wearables Will Change How We Think Of Mental Illness

Wearables made the transition from tech novelties to mainstream products thanks to fitness nuts. But next frontier of wearables might tackle a less tangible (and often neglected) dimension of well-being: mental health. According to the National Alliance for Mental Illness, about one in five Americans suffers from mental illness in a given year. One in 25 suffers from a severe mental illness.

While it might be harder for wearables to heal the inner reaches of your psyche than help you shed a few pounds, clever developers have created devices that have the potential to ease common mental problems — and change the stigma surrounding mental health in the process.

Here are five ways the new wave of wearables promises to help people perform at their mental peak.

Unlike physical health issues, mental health problems such as anxiety and depression are often invisible, even to people who are harmed by their conditions. Once they start manifesting physically — in the form of disengagement from social contact, poor performance in work or school, or a sedentary lifestyle — it's usually a sign of a problem that has been silently festering. The solution might be to use the data-collecting power of wearables to better understand changes in mental health.

Mental health monitoring devices have the potential to catch mental issues while they are low-impact and easily treatable. One promising example comes from an experimental app called StudentLife, which was developed at Dartmouth College. The app is a mobile ecological momentary assessment (mEMA) tool that periodically quizzes students about their mood and behavior as they go about their daily life. It also automatically senses a student’s activity level, sleep, and number of conversations with other people (in order to measure person-to-person sociability.)

One study used StudentLife to examine the day-to-day and week-by-week impact of workload on the stress, sleep, activity, mood, sociability, mental well-being, and academic performance of 48 students across a 10-week period. This diagram shows how the data collection worked. 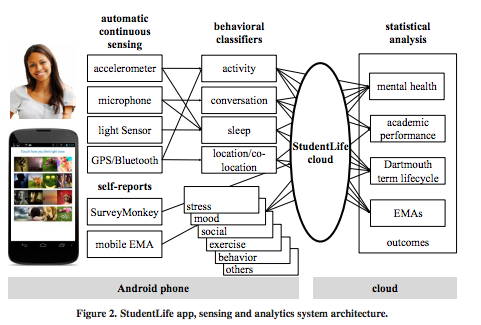 Unsurprisingly for anyone who remembers being an undergraduate, the study found that “as the term progresses and the workload increases, stress appreciably rises while positive affect, sleep, conversation and activity drops off.”

Compulsive behaviors, particularly those that started in childhood, are notoriously hard to kick. Automatic tics like nail biting, skin picking, hair pulling, and thumb sucking might sound like minor annoyances to someone without these compulsions, but they’re destructive enough to harm a person’s quality of life.

These behaviors are stubborn because they’re performed unconsciously. But wearables have the potential to force people to become aware of their compulsive actions.

One wearable taking this route is the Liv from HabitAware.

The device gently vibrates whenever the user performs their compulsive behavior. Once they are aware, the user can direct their thoughts and actions somewhere else.

Being more aware isn’t just helpful for people with compulsive behaviors. It can also help people ease stress, depression, and anxiety. The ancient Buddhist practice of mindfulness (bringing your attention to the present moment) has recently surged in popularity in the West. This is partly due to the volume of scientific research in support of the practice and Oprah-approved bestsellers like Eckhart Tolle’s The Power of Now. But it’s also due to the number of apps and wearables that make mindfulness more accessible.

One such wearable is Spire, a device that helps people become more aware of their breathing. If you become tense, Spire alerts you (rather than allowing you to unconsciously stew in the tension) and guides you through relaxation techniques.

Another innovative device is the wrist-based Zensorium Being. Like a Fitbit for your mood, it senses your state of mind by measuring your heart rate and blood pressure. Then it tracks where that data fits into one of four different mood “zones.”

4) Diagnose Brain Health (Better Than What Was Possible Before)

There’s a tight connection between mental health and brain health. But, much like mental health issues, brain problems can start almost invisibly small and get progressively worse. Neurological problems are also difficult to diagnose because they are commonly characterized by wild day-to-day swings in symptoms. A patient might exhibit sudden anxiety and depression on Monday, but be back to their old self on Tuesday. A single clinical test at the doctor’s office might not catch a patient on a day when they exhibiting the worst symptoms.

But the developers behind the software platform Cognition Kit aim to solve that problem. Rather than just collecting biological and psychological data at one point in time, it collects crucial data daily. This can give a clearer picture of brain health, leading to a more accurate and speedier diagnosis of neurological problems

The most promising wearable is the Fisher Wallace Stimulator. This is an FDA-cleared device that can be prescribed by a doctor to treat insomnia, anxiety, and depression. It contains two electrodes which are attached to the temples with a headband and deliver gentle electrical pulses. These electrical pulses produce serotonin and other neurochemicals required for healthy mood and sleep.

This method of treatment, technically called cranial electrotherapy stimulation (CES), was more effective than a placebo in clinical trials. While the Fisher Wallace Stimulator is hardly new (it’s been around since 2009), it proves that wearables have the potential to be a serious medical alternative to treating mental illness with medication.

These developments are encouraging, but the most significant contribution wearables will have to mental health won’t be data collection or direct treatment. It will be the destigmatization of mental illness.

There’s no shame in buying a Fitbit and changing your diet and exercise routine if you want to be healthier. But people who admit to having mental health issues don’t have the same level of acceptance. A 2008 survey of adults in Alberta, Canada found that over 45% of respondents thought that people with depression are unpredictable. Over 20% thought that people with depression are dangerous.

But that can attitude can change as mental health wearables become mainstream. In the near future, it’s possible that products designed to give yourself a psychological tune-up will cover Walmart’s shelves and the wrists of people you see every day. When that happens, it won’t be possible to pretend that mental illness is a rare and dangerous condition. It will taken just as seriously, and treated with just as much understanding, as physical health issues.

There’s no shame in buying a Fitbit and changing your diet and exercise routine if you want to be healthier. But people who admit to having mental health issues don’t have the same level of acceptance.