How NFC Payments Are Permanently Changing The Way We Buy Things

If you have Apple Pay or Android Pay installed, you can pay for your coffee by tapping your phone to a sensor. If you happen to have the right kind of smart ring, you can even pay without your wallet or your phone.

The technology that powers all of these systems is called near-field communication (NFC). It has the potential to make plastic credit cards obsolete. But this technology’s ability to seamlessly transfer data can also change more than just how we pay for things.

How can it do that? And is it safe? To help explain how this technology works, we asked Alex Howard, Chief Technology Officer of TX Systems, about NFC and all the ways it can be used.

The Technology Of NFC Payments

NFC is simply a set of communication protocols that allow two devices to pass data between each other. It works through electromagnetic induction between two small antennae, which allows data to transfer over very short distances. This gives a smartphone, smartwatch, or other device the power to securely give information from your financial institution to a merchant for a transaction. 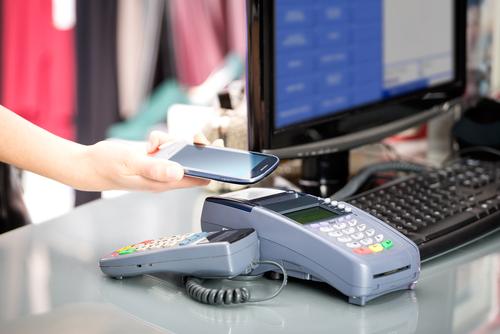 How Is NFC Different From Bluetooth?

You might be reasonably thinking, “That sounds a lot like Bluetooth. Why does my phone have Bluetooth and NFC technology?”

While both of these technologies are used to transfer information over short distances, there are a few crucial differences between them. Most importantly, they differ in how far they allow two devices to communicate. NFC is based on set of standards called ISO14443. According to Howard, these standards define “the max read distance around 10 centimeters for security purposes. Bluetooth is typically used up to 10 meters.”

This is why you’re able to connect your phone to Bluetooth speakers across the room, but you have to hold an NFC device very close to a reader in order for it to work.

NFC also transmits information more slowly than Bluetooth. This normally isn’t a problem since NFC is only used for very small amounts of data. NFC also doesn’t require you to pair two devices. Instead, it can automatically establish a connection in less than one-tenth of a second. The limited range of NFC allows it to work with minimal energy, which is why it can be used in tiny devices like rings.

Though you might be concerned about the security of NFC payments, they are actually more secure than the old-school credit cards with a magnetic stripe. Howard said that the security level is similar to EMV credit cards, which use a chip in order to secure transactions.

“NFC payments use a secure chip like an Embedded Secure Element or SIM, which provide the same security as an EMV card transaction,” Howard said. “Also, all processing applications are required to be certified by MasterCard and Visa.”

If NFC payments are so awesome, why isn’t everybody using them?

Right now, it’s a matter of corporate politics and bureaucracy. There are a lot of companies who are involved in mobile transactions, and a lot of money at stake. Howard said that all of these companies are jockeying for control:

“The problem lies with who owns, manages and monetizes the Secure Element that handles the transactions. Is it the phone manufacturer, the cellular provider, the credit card company, or someone else?”

It was hoped that NFC payment adoption would speed up in 2014, after Apple launched Apple Pay. But that hasn’t inspired the kind of the economy-wide changes the industry was hoping for. What will it take before everyone uses NFC payments, and it becomes as common as credit card transactions?

According to Howard, “I think it will take significant partnership between all the major players, as well as some incentive for retailers and users to utilize the technology to really speed things up.”

While, for the moment, most people are still more comfortable with credit cards, more people are moving over to contactless NFC payments. According a report from the research firm Strategy Analytics, the value of transactions conducted via NFC handsets is estimated to be $30 billion in 2016. But based on current trends, that’s expected to grow to $240 billion by 2021.

While mobile payments are currently the most visible use of the technology, NFC has the potential to touch many parts of our daily lives. Howard envisions a future in which security, healthcare, and even dining are all made easier thanks to NFC:

“We see NFC being used everywhere. Think about accessing your parking garage, then your building, then your PC, and then all your web apps, all using a credential on your phone. Think about verifying the presence of a caregiver at a patient's home. Think about time and attendance applications for students or workers. Think about storing temperature readings on a smart label and retrieving those transactions via NFC for cold storage management. Think about marketing campaigns using NFC tags at a restaurant's table.”

When NFC fully breaks into the mass market, its potential applications will only be limited by the imagination of industry leaders.

This technology’s ability to seamlessly transfer data can also change more than just how we pay for things.