Shawn DuBravac Says Wearables Are Moving Beyond The Wrist

At CES 2017, Dr. Shawn DuBravac, Chief Economist of the Consumer Technology Association, laid out trends for this year’s show and the consumer tech industry as a whole — and he wasn’t worried about boosting expectations.

“It will be, without a doubt, the best CES in 50 years,” DuBravac said to the standing-room-only crowd inside a convention room in the Mandalay Bay. 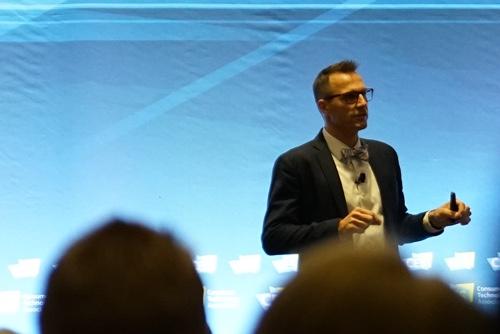 DuBravac explained trends in several fields, including artificial intelligence, the smart home, and human-computer interaction. As voice recognition improves, he expects common graphical interfaces to fade in favor of voice control, leading to an era of “faceless computing.”

For wearables, DuBravac said that their primary value is to make data meaningful. Rather than relying on a single device, consumers will get data from several different wearables to “get a strong signal of what’s happening.”

One example of a niche device is the Prevent Biometrics mouthguard. The device, worn by athletes in contact sports, monitors how forcefully a person suffers a head impact. The use case is specific, but it’s also essential because it could possibly help detect concussions, leading to speedier and more effective treatment.

Wearables are also moving away from the wrist. 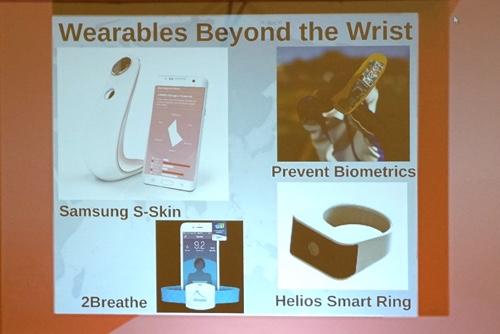 While most consumers think of wearables as simple, wrist-worn fitness trackers like the Fitbit, the field is becoming more diverse. DuBravac gave the example of the Samsung S-Skin, which is used on the face. It is a microneedle patch and a portable device that analyses and cares for the skin.

The Helios Smart Ring is another non-wrist device with a very specific function. This device detects sunlight throughout the day to calculate how much vitamin D a person consumes.

He argued that, in terms of wearables, “we’re not looking for the blockbuster product” like a smartphone. There won’t necessarily be one device that will dominate all others. Instead, the field is fragmented and digitized. Wearables will blend data from diverse devices to improve the meaning that consumers get from their data. For example, data can combine to give users actionable “recommendations to follow.” 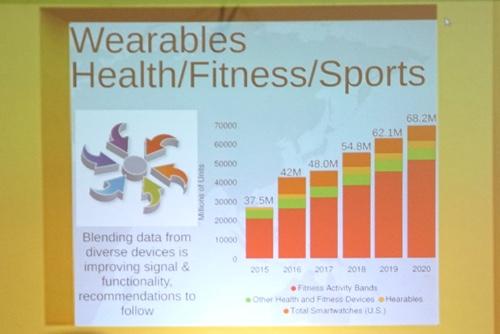 He said that the industry will double by 2020, selling an estimated 68.2 million units that year. There are already strong signs of growth of the industry. This year’s CES alone will see nearly 20,000 devices.

The wearable market will double by 2020, says @shawndubravac #CES2017 #wearables

While it was a promise of the diverse offerings at this year’s convention, DuBravac’s declaration about the health of wearable tech seemed to be a direct rebuke to some tech writers who claim that we are in a middle of a “gadget apocalypse.”