What if you could safely secure almost any drawer, cabinet, or door in your home — and turn your phone into the key?

Smart Cube, a Bluetooth door lock designed by Smart Armor, wants to change the way you think about personal security. On Oct. 5, we spoke with CEO Justin Zastrow and CTO Ira Hayes at the Wearable Technology Show in Santa Clara. The duo showed us how Smart Cube works — and what’s on the horizon for the San Diego-based startup.

As Smart Armor’s first product, Smart Cube is part of the company’s mission to protect what matters. To do this, Smart Cube makes use of the Internet of Things: a vision of the internet in which everyday objects have connectivity.

Smart Cube isn’t intended to replace your cupboards. Instead, it retrofits drawers, doors, and anything else that locks with a deceptively simple, yet totally customizable, Bluetooth locking system.

When asked what kind of consumer Smart Cube is intended for, Zastrow listed anyone from “any parent who wants to keep their kids out of the medicine cabinet” to people who want to secure “bedside drawers where you may keep your gun.”

The device is simple. True to its name, it’s a small, black cube with a ratchet locking mechanism. The cube attaches to a cabinet or drawer, and the locking mechanism attaches to the door itself. When you shut the door, the cube locks — and you can walk away knowing your valuables are secure.

“There are three ways to enter it through your phone,” Zastrow explained. He opened the Smart Cube app on his iPhone. “You can either enter an alphanumeric code — one, two, three, four — or you can do a biometric access where a thumbprint opens it up. Or you can customize it through your settings to where you walk up to the drawers and it automatically unlocks when you’re in proximity.”

Zastrow expects the majority of Smart Cube users will use the proximity feature; it’s extra convenient because the device automatically locks once the user walks away. Within the app, different users can receive exclusive access to the lock. When asked how many users can receive access to a Smart Cube, Hayes smiled and said, “Unlimited. Right now the only thing that’s limited is Bluetooth channel capability. You can have eight of them active at once. But generation five comes out at the end of the year, and it’s gonna open that channel up.”

Smart Cube operates with an encrypted token, which allows users to safely share access with as many users as they want. “You can time distinguish it. You can give access to your nanny from 9-5. You could give it to your gardener if you have one in your pool box. That part’s scalable because it’s just software,” Hayes said.

Zastrow demonstrated how the Smart Cube works in real time. “This obviously has a ratchet,” he said, pointing at the locking mechanism in the cube, “because you don’t know how deep or shallow a drawer can be.” He unlocks the Smart Cube through the app, and it emits a beeping sound as it unlocks — an effect that is both satisfying and old-school techie.

The app is compatible with both iOS and Android, and Smart Cubes can also be controlled from desktop computers and tablets. The battery lasts for one to two years, and they can be re-installed for maximum portability.

But what about digital security — namely, what’s preventing a hacker from opening up your jewelry drawer? Hayes was one step ahead of us. The app maintains an activity log each time a Smart Cube is accessed, and the device is secured with a three-encryption process. “It comes with a passcode, much like a smartwatch does. So when you link to it, you establish a secondary passcode — like your ATM PIN,” Hayes said. “It also makes this device invisible to anyone who doesn’t have access, so they can’t just come up and find it. You have to be within 150 feet to access it, so someone from Russia isn’t going to be able to hack it.”

“We’re also finding that we’re not selling just one unit to people,” Hayes said. “They’re looking to buy two, three, four, and up because it has that ability to be in multiple places, especially things in shared environments — like an Airbnb home or dorm room.”

Hayes explained that a user can toss the device into their luggage and track it, receiving a notification when their valuables break range. “For applications like instruments or anything valuable in a box, you can install it, and it’s retrofittable. You don’t have to buy a new thing. You can put it in your old stuff,” Hayes said. 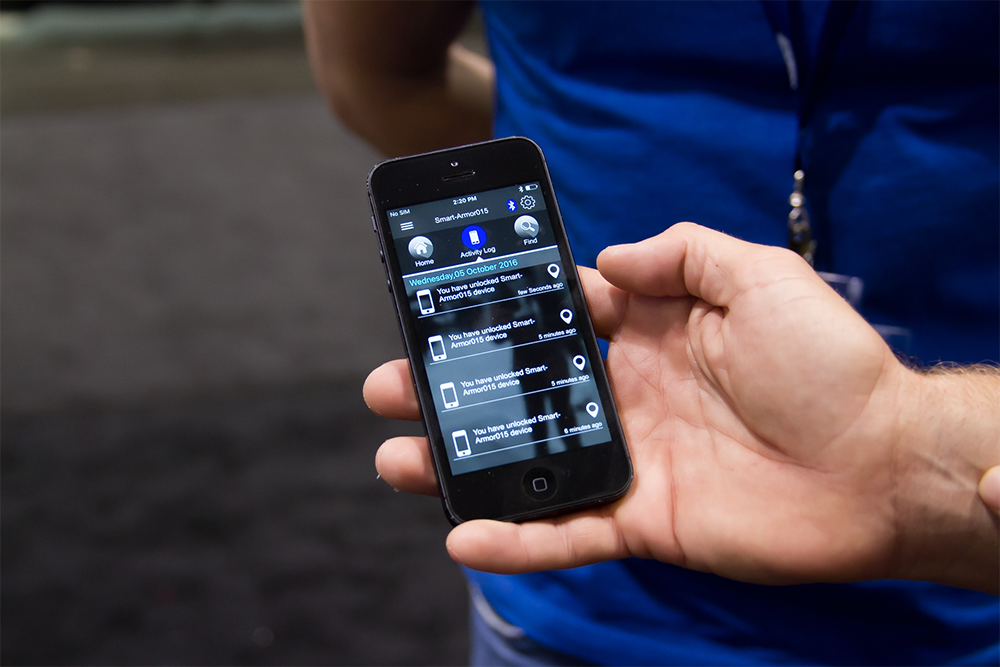 In fact, the sheer range of Smart Cube’s use cases might explain its expedited timeline: the product was conceived in January 2015, the first prototype was created in March later that year, and first shipments are expected in December 2016.

Smart Cube completely crushed its crowdfunding goal, which paints a clear picture of its varied audience: people want to keep their valuables safe, but they also want the mobility and portability that the device provides.

Throughout our conversation, Zastrow and Hayes rattled off wide-ranging possibilities for the device: it’s for international travellers that want to track their valuables, it’s for anyone who wants to secure the small drawers in their home, it’s for parents who want to keep their children safe from guns and alcohol and cleaning supplies. It was easy to get caught up in their nonstop brainstorming. They were envisioning a future that didn't need the primitive lock and key system anymore — a future in which personal security was as simple as having your phone in your pocket.

In a world that's constantly trying to balance security and accessibility, the Smart Cube’s early success makes complete sense. It takes the best parts of the Internet of Things — connectivity, shareability, and convenience — and seamlessly integrates them with our everyday lives.

“It’s a one-to-many relationship,” Hayes said. “One person can have many cubes, and one cube can be owned by many people.”

“One person can have many cubes, and one cube can be owned by many people.”