Smart Glasses That Are Paving The Way For Augmented Reality

The rise of Google Glass made it appear that smart glasses were on the cusp of going mainstream. But in 2015, Google stopped producing the face-mounted augmented reality devices. The official word was that the device (worn by people sometimes derogatorily referred to as “glassholes”) was experimental, and Google is committed to producing an ever better version.

However, you don’t have to wait until the geniuses from Mountain View, California give us the next incarnation of the smart glasses. Small tech companies are making new devices that help people get fit, take video, get directions, and more.

Here are the coolest smart glasses you can buy right now — plus a few exciting devices you’ll be able to buy soon.

The Level is like a Fitbit for your face. It packs all of the classic fitness tracking equipment — like an accelerometer, magnetometer, and gyroscope — into a pair of glasses. This allows the Level to track steps, distance, and calories burned. Like a wrist-worn fitness tracker, the data is logged in an app.

This might be a welcome development for people who already wear glasses. They can get all the benefits of fitness tracking without having to remember an extra device when they walk out the door. But unfortunately, most of us won’t get to try it out for another year or more. The glasses are currently undergoing a pilot study that aims to understand how people use the device. The study is scheduled to end in December of this year, and the results will be published in 2017. There is currently no schedule to bring the product to the consumer market yet.

If you’re a cyclist zipping down a hill at 30 miles per hour, you can’t glance at your wrist in order to check your heart rate. But that kind of self-monitoring can give cyclists who power through long rides a strategic leg up. In order to help aspiring Tour de France winners, the Solos smart glasses give riders all the data they need in a convenient heads-up display.

The data includes heart rate, speed, cadence, and power output in watts. The Solos frame includes a microphones and speakers, presumably to allow for hands-free communication. 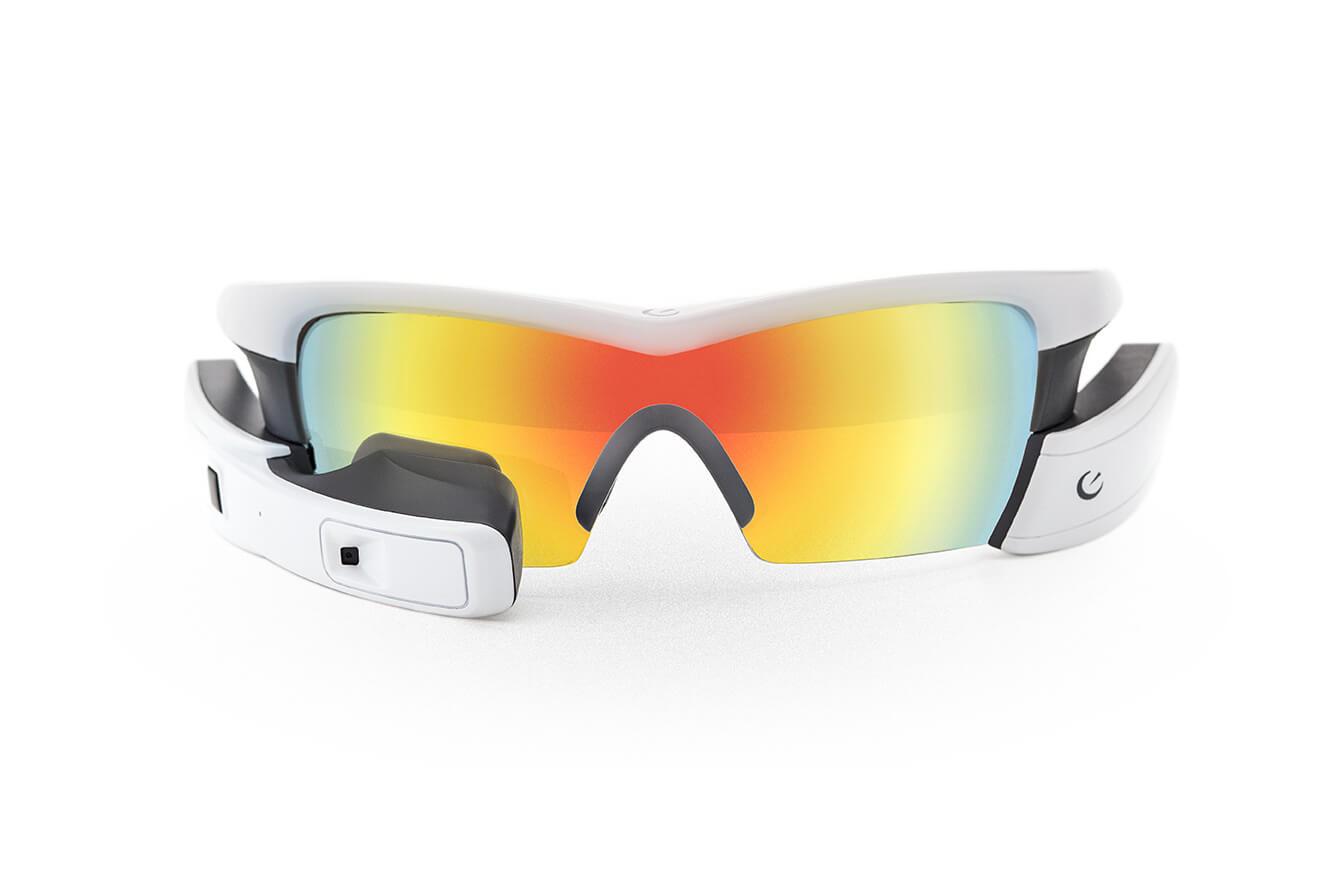 Solos isn’t the only company who sees potential in sports-focused smart glasses. The Recon Jet also is built to feed information to data-obsessed athletes — and it boasts an impressive set of hardware in order to do the job. The device includes a 1GHz dual-core processor, magnetometer, gyroscope, altimeter, HD camera, accelerometer, GPS receiver, and thermometer.

The Recon Jet, like the Solos, is designed to help cyclists. The Snow2, on the other hand, gives skiers and snowboarders information about their time on the snow. The devices comes with preloaded resort maps that can be seen on the heads-up display — so riders can always how far down the bottom of the mountain is.

The Vuzix M300 is built for industry. On the product website, the company boasts that it can “improve existing workflows and open new opportunities in industrial, medical, retail, supply chain, remote help desk, and other aspects of your business.” The glasses, which run on Android, come with pre-installed apps that can manage your calendar and sync with your phone. The core feature is the HD camera, which can record video and play it back to the wearer or another person. It also works as a bar code scanner.

The device has respectable specs despite its tiny size. It includes 16GB of memory storage, 2GB or RAM, and Bluetooth and WiFi connectivity. Very recently, Vuzix announced that they are shipping the first batch of M300s to key customers.

The Sony SmartEyeGlass is another device focused on making life simpler for people in the business world. Developers can build apps using the included accelerometer, gyrometer, compass, brightness sensor, microphone, and camera.

In the demo video, actors are portrayed using the device to scan inventory and identify fuses — not exactly the sexiest way that augmented reality can be used. But there are undoubtedly many practical uses for this new technology, and Sony is trying to position themselves as a provider of high tech enterprise solutions.

Epson is one of a handful of companies rushing to offer general-purpose smart glasses in order to fill the void left by Google Glass. They have typically focused on the business applications of this technology, but their next model, the Moverio BT-300, is positioned to also appeal to recreational users.

The most impressive feature is the 720p OLED display — which is like having a crystal clear HD television right in front of your eyeball. The camera is equally powerful, capturing 5-megapixel images. Possible applications promoted by Epson include augmented reality games, drone control, and museum tours.

GlassUp is a product launched with the help of Indiegogo funding. From its reasonable price point ($389) to its smartphone integration, the device is clearly making a play for everyday tech users. It features an accelerometer, compass, ambient light sensor, and Bluetooth connectivity.

GlassUp will be featured in the upcoming Wearable Tech Show. We’ll report about the capabilities of the smart glasses in more depth next week.

Snap (the recently renamed company behind Snapchat) moved from blockbuster app to hardware with the release of the Spectacles. The functionality is simple: it records brief, Snapchat-friendly video and connects to your phone via Bluetooth. While not as splashy or innovative as the other smart glasses on this list, they have a millennial-friendly price point ($130) and automatic integration with the fastest-rising social network. If they take off, they could surpass Instagram’s attempt to take over Stories.

Meta is still firmly in its development phase. But its potential to be on the bleeding edge of augmented reality has generated a lot of hype. Its promo video features gushing endorsements from celebrities and tech pioneers like will.i.am, Reddit co-founder Alexis Ohanian, and veteran tech blogger Robert Scoble.

One of the most intriguing promises of the Meta is its purported ability to track your hands. This allows you to grab and move virtual objects, manipulating the augmented world just like you would the real world. According to Meta’s website “the world becomes your desktop background.” There’s no word yet on when consumers will be able to try it out. But developers who want to create apps for the device can preorder one for $949.