In terms of overt brutality, few combat sport brands pack as much of a punch as Big Knockout Boxing (BKB). Owned by DirecTV, BKB is designed to force fighters into an all-out brawl; instead of a ring or a cage, they’re placed in the center of a 17-foot pit. For a series of two-minute rounds, the fighters stand toe-to-toe as they swing, fighting for BKB’s ultimate goal: a total knockout.

It’s a sport for heavy hitters, and it’s an event for fans who like to see relentless, unending punches. But unexpectedly, BKB carries one of the most promising advancements in combat sports technology. It isn’t in the sweat or blood or roar of a bloodthirsty crowd: it’s in the fighters’ gloves. 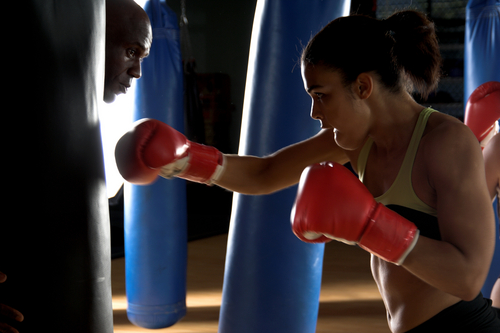 StrikeTec, created by EFD Sports, is a small, rectangular sensor that is designed to fit into a band, glove, and hand wrap. Its diminutive size hides a powerful sensor that can detect everything from a punch’s speed and force to its rotation and acceleration — and soon, its technology will be able to quantify kicking power and grappling movements.

I spoke with Wes Elliott, the founder and CEO of EFD Sports, about StrikeTec’s role in combat sports — and our conversation quickly made one fact clear: StrikeTec is paving new ground for the UFC and MMA. Here’s how.

“My granddad was a boxer,” Elliott tells me from his office in Texas. “I never fought professionally. It was always just a hobby for me to stay in shape.” He describes himself as having an “all-field experience,” and his eclectic background speaks for itself: Elliott has been a personal trainer, an auto parts developer, an oilfield consulting supervisor — and always an entrepreneur.

That background, coupled with a relentless ability to keep moving forward, helped him start StrikeTec in 2010 and develop a sensor prototype in 2011. “From there,” Elliot says, “we were able to start testing the limits of what we could do. As technology evolved, the components got smaller. We kept downsizing, and we kept making the processors faster.”

StrikeTec is now in its fifth generation of sensors, and has plans to got to market this summer with a consumer product. The technology has already pivoted into MMA — StrikeTec has attended UFC Athlete Summits in the past, and most recently was in Ottawa at UFC Fight Night 89. “These fans tend to like to see striking,” Elliott explains. “When two people grapple on the ground and they’re doing jiu-jitsu, it seems to get a little boring for the fans to watch.”

It’s true — last year, UFC featherweight Clay Guida called out MMA fans who boo good wrestlers, saying, “shame on those fans.” That sentiment is part of the entire reason why a sport like BKB exists — casual fans like to see heavy punches, and grappling doesn’t always provide an immediate payoff.

“How do we make this entertaining?” Elliott asks. “How do we show that even though these guys are going to the ground, there’s a lot of interesting stats?” The answer lies in StrikeTec’s ability to broadcast live updates about stats like striking power through its accompanying app. It’s an invitation for fans to understand and quantify what’s happening in the cage or ring, even when something like Conor McGregor’s knockout punch on Jose Aldo seems to happen in half a second.

But what about the fighters?

The Next Generation Of Training

Elliott believes StrikeTec can have applications for more than just fans who want to understand the power of a punch. “It’s an offensive product,” he says. “It’s gonna help train on a bag, and part of our implementation is also to detect what you’ve been dealt.”

He lays it out for me: you’re sparring with a partner, getting struck left and right without quite understanding why. If both fighters are wearing StrikeTec sensors — what Elliott calls being “synced” — you can log into StrikeTec’s portal and understand exactly what those punches were, how fast they were going, and how many times you were hit. “It’s not just about offense. It’s about defense,” he says. “So hopefully, once these fighters start training with that product and have that baseline about themselves, their coach can say, ‘Hey, this is what we need to do differently.’” 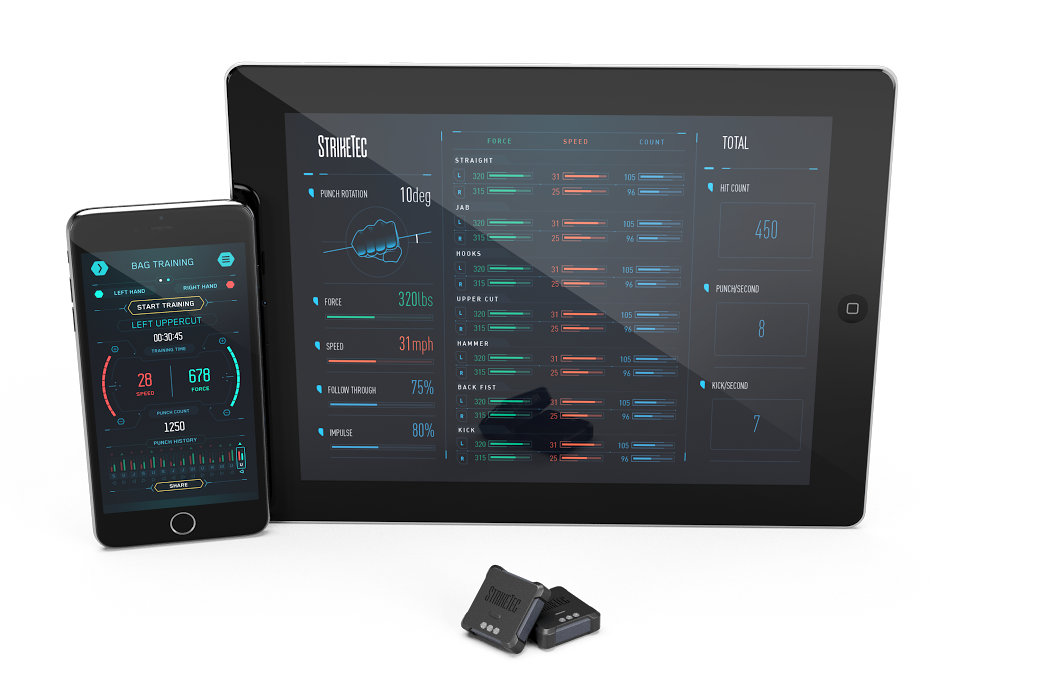 Elliott likens the technology to baseball before the advent of the radar gun. “How do you know if you’re getting faster when you don’t have a baseline statistic?”

His mention of baseball is more than apt — and not just because it reveals how fighters can benefit from understanding the numbers behind their punches. There’s a potential cash incentive, too.

After all, potential baseball recruits can broadcast their pitch speeds to future teams. Why shouldn’t fighters publicly boast about the power of their jabs?

Paying To Be A Fighter

“For a fighter in a gym, how many people can you possibly train?” Elliott says. “Not only do you have your training camp and what you do to stay in shape for the fight, but you have to make money. Most of these fighters have to find side jobs or work at the gym.”

I’ve spoken with and trained alongside amateur and professional fighters in my hometown and my gym, and I hear the same sentiment from those who want to turn their fighting into a career: they want to fight, but they’re hurting for a reliable income. They know their worth and talent, but it’s tough to secure sponsors when they aren’t just fighting in the ring — they’re also fighting to make names for themselves.

Recently, UFC strawweight Joanne Calderwood shared on Instagram that she wouldn’t be able to train at her gym because she didn’t get a bonus after knocking out Valerie Letourneau. UFC President Dana White expressed that she would, in fact, receive a bonus and a revised contract after all, but the sentiment remains — unless you’re in the celebrity echelons, it’s expensive to be a fighter, regardless of your abilities.

Presenting statistical proof of their striking power could potentially boost a fighter’s credibility, especially as they try to prove themselves to potential sponsors and promotions. If StrikeTec’s data can help a fighter secure another sponsor — or sign a career-changing contract with the UFC or Bellator — the benefits of broadcasting their stats through StrikeTec are huge.

Of course, sharing fight data is tough terrain to navigate. For unsigned fighters who want to start building their brand, using social media and posting their training sessions can potentially expose their strengths (and weaknesses) to other fighters. It can also lead to opponents pulling out at the last minute because they don’t want to put themselves at risk.

What if every fighter knew exactly how hard and fast their opponent could punch, kick, and grapple? Would that entice them to back out — or boost their resolve to fight? 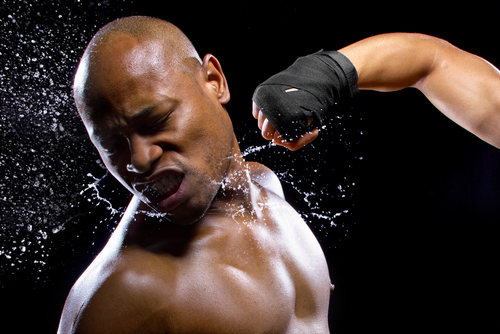 Elliott also has high hopes for StrikeTec’s potential to fit into the way fighters can earn an income by interacting with others who want to train. His vision is this: virtual training, i.e. the ability for fighters to offer programs for fans that want to learn how to fight like their favorite athletes. It’s a small part of what Elliott hopes to release for fighters — but a large part of the potential for StrikeTec to more closely align itself with the evolution of MMA.

StrikeTec has been working with the UFC, and has been approved by the Nevada Athletic Commission, among others. “I’m hoping other organizations jump on board,” Elliott says. “We were working with Bellator MMA for a while, and we’ll be moving forward with a couple of other organizations we’ve been talking with. I think it’s good for the sport. I think this sport needs it. Every other sport has analytics, and I feel like it help with the evolution of MMA.”

Elliott has a timeline: he wants StrikeTec to be available later this year. EFD Sports has plans to launch an Indiegogo campaign for preorders, and they’re working with a tier one manufacturer to produce large volumes of the fitness sensor for fighters, casual hobbyists, and fans.

I asked him what his pie-in-the-sky ideal for StrikeTec would be. “We’re working with the largest wearable technology manufacturer in the world, so hopefully we have some big news coming soon. We’re certainly looking forward to it.”

Update: In a press release on Jan. 18, 2017, StrikeTec announced its first wearable tech sensors would be available for preorder in February 2017.

At the end of the day, it’s a fight. Everybody has a chance.