Because of his former job, Rahat Ahmed saw the virtual reality revolution a lot sooner than the rest of us did. Back in 2014, his position as a technology investor gave him a rare peek into the infancy of modern VR — and its transformative potential.

“When I started looking at VR, it became obvious to me that this is the next internet,” he said. “This is the next great technology that’s going to change the way we live.”

That early insight, combined with his passion for gaming, led him to co-found TrinityVR with Julian Volyn, Zach Lynn and Jeff Danis. That trio already had expereince with building virtual enviornments — they constructed a cross-platform game engine while attending Rensselaer Polytechnic Institute in upstate New York. At first, TrinityVR set its sights on building peripherals for virtual reality experiences. But the team eventually realized they could use virtual reality to accomplish something more ambitious: empowering sports teams with more performance data than is normally possible.

Related: How Hykso Helps You Train Like Muhammad Ali

That realization lead the creation of DiamondFX, a VR baseball simulator that allows you to face off against virtual versions of real pitchers. Batters can strap on a VR headset, grab a bat, and see how they might fare against Clayton Kershaw. The data generated from severals swings can give baseball managers a new level of data-backed insight into players, which can help them make smarter roster decisions.

“If you’re looking at AA or AAA people to call up, how do you decide who is going to be able to read Kershaw better than your current batters?” Ahmed explains. “How do you predict something that’s never happened?” These players have probably never faced off against the Dodgers pitcher, but managers still have to decide who has the best chance of hitting against him. Trinity VR’s solution is to drop players in a data-backed virtual simulation of the real thing.

However, a VR simulation could test more than just raw athletic performance. It can also test mental performance. After all, one of the biggest challenges young star athletes face is overcoming the pressure of playing in a venue like Fenway Park. Ahmed explained, “We want to create simulation scenarios where we can actually recreate the atmosphere of Fenway, and see how someone handles the pressure, based on collected biodata.”

A simulation can also test how players react to stressful situations they might encounter in a real game. “We can say, ‘It doesn’t phase this kid if someone’s talking trash or if it’s really loud. He knows how to compose himself regardless of the pitch count, the situation, whatever,’” Ahmed said.

Simulation performance is useful for more than just data collection. It can also be used for player development. Trinity VR is in talks with one baseball team to use their technology to identify and improve player weaknesses. With enough data, teams can get insights that aren’t normally possible. “We’d be able to gauge if a player loses their edge against outside curveballs, of if they have a tendency to not do well only if they face pitchers over six feet tall,” Ahmed said.

Data has the potential to not just improve teams, but also challenge age-old assumptions about what a good team or player should do. This has already happened in baseball, when Billy Beane of Moneyball fame used statistical analysis to buck traditions and build stronger teams. It has also happened in basketball, when Daryl Morey, General of the Houston Rockets, used data to determine everything from the best place to shoot to the best player to acquire in a trade.

Thanks to virtual environments, collecting even more data could raise statistics-based decision making in sports to previously unthinkable levels of effectiveness and precision. 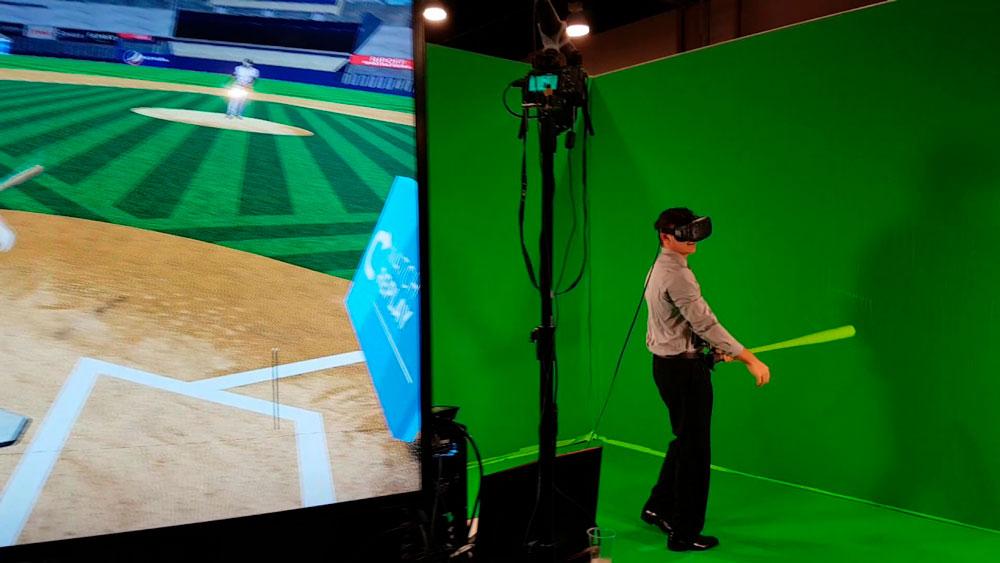 Ahmed stresses that DiamondFX is simply a tool, not a replacement for scouts and managers. The simulation, after all, can only potentially assess one dimension of player performance. “The final judgement should be based on more than just the data that we give you,” he said.

Ahmed simply wants DiamondFX to help baseball teams do what they’re already trying to do: win more games and make smarter roster decisions — and he wants to help recognize and promote budding talent at the same time. “We don’t just want to be a training tool or player development tool. We want to help build teams from the ground up, help them make decisions on who to draft, who to sign, and also how to scout better,” Ahmed said. “Ultimately, we want a better game and we want to reward the right people. And big data allows you to do that.”

Trinity VR expects that once teams start seeing the power of DiamondFX, baseball will never be the same. “We are excited to see teams use this. We built something that we think can change the game, but it’s up to people in the game to accept us,” Ahmed said. “We are not domain experts in baseball, so we want to learn from those who know the game and help them in the process. Once we see that happening, that’s what’s going to take us to a different level both emotionally and as a business.”

We want to help build teams from the ground up.