Almost everybody carries a camera with them, and people are now very good at sharing their life. According to Mary Meeker’s most recent internet trends report, the annual state of the internet published by the firm Kleiner Perkins Caufield & Byers, over three billion photos are shared to social media networks every single day. Two billion of those are uploaded to Facebook-owned properties. And that doesn’t count photos that never make it to social networks.

But as wearable cameras like the the Narrative Clip 2 become more popular, that might be just a drop in the bucket.

The Narrative Clip is a small camera that attaches to your shirt or hat and automatically takes a photo every 30 seconds. Users can also record a short video by double tapping the device. 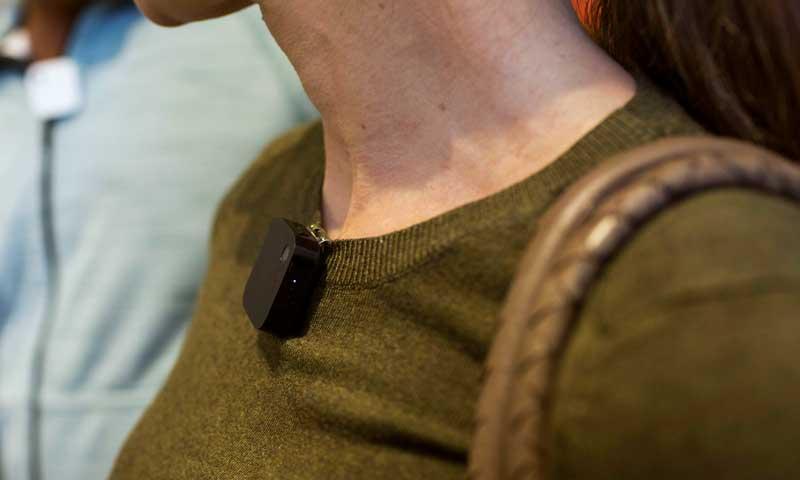 Founded in Sweden in 2012, the company that makes Narrative launched on Kickstarter with the goal of raising $50,000. But worldwide fans were so enamoured with the idea, they wound up raising over $500,000.

Oskar Kalmaru, a co-founder and CMO at Narrative, told me that his personal interest in an automatic camera came from the birth of his son. He wanted to be able to photograph his child during the rare sunny days in Sweden while still being present in the moment.

“Before I became a father, I didn't really have a sense of time as a finite asset. But with a baby, every moment suddenly felt unique. I wanted to capture forever this sunny Sunday where he was 3 months old, because come next sunny Sunday he might be a month older and different,” he said. “I wanted to soak in every moment, but also capture it for my future self. Regular cameras didn't let me do both, but an automatic wearable camera could.”

The Narrative Clip offers a solution to a common complaint about the smartphone era: that we’re all too tethered to our smartphones. Most people, obviously, don’t want to view their vacation or family get togethers through the lens of their phone’s camera. But they feel obligated to for the sake of their friends and family — or for posterity. By continuously taking 8 megapixel photos, the device allows people to be both a participant and a documentarian of their life at the same time.

But with so many photos being captured (the Narrative Clip 2 can store up to 4,000 photos), how do you sort through the good ones? The Narrative helps users pick out the photos that actually preserve memories. “The Narrative app comes with a clever algorithm, that sifts through the photos to highlight the ones with crisp and vivid colors and with faces in them and without blur, noise, weird orientation or other elements that typically makes them less interesting,” Kalmaru said. “The result is a timeline of stuff that most likely matter most. Everything is kept available though for you to find if you're for example looking for a photo from a specific minute.”

The Narrative Clip 2 wearable camera has found uses that extend beyond individuals that want to have pictures they can show off on social media. Businesses use it to tell their brand stories and capture customers in action, and academics use it for their research. Kalmaru says that some companies even use it to reveal how their product is created behind the scenes. For example, the British-based potato chip brand Walkers put a Clip on a potato farmer to show how their snack went from the farm to the bag.

Researchers also use photographs from the clip as data when conducting experiments. “Honestly, we didn't expect the impact the Clip has had in academia,” Kalmaru confessed.

“Lifelogging” is the practice of capturing every moment of your life through photos, video, audio, or data. It once only practiced by few people who were willing to spring for the pricey and bulky cameras that made them possible. But as the technology become more affordable and convenient, basic economics demands that more people will participate. But even people who simply want to capture special events, and not necessarily every moment of their life, will find a lot of value in a wearable camera.

“The passive logging of our lives, through our ‘digital footprints’ and content we create, is inevitably becoming richer and easier,” Kalmaru said. “Narrative is proud to have contributed to that development, while still being a popular tool for those who just want to have a good time and get photos and videos to share.”

Soon, it might be common sense that sharing your life in pictures doesn’t have to be a barrier to living your life. And 3 billion photos uploaded to social media a day will seem quaint by comparison.

"I wanted to soak in every moment, but also capture it for my future self. Regular cameras didn't let me do both, but an automatic wearable camera could."