On Monday night, the Metropolitan Museum of Art hosted its annual event to raise money for the Costume Institute, the museum's only self-funded department. The Met Gala 2016 — or, more pointedly, what publicist Paul Wilmot called the "ATM for the Met" — was a night for America's rich and beautiful to get dolled up and flaunt the most cutting-edge formal wear to millions of adoring fans.

Anna Wintour, American Vogue editor and chairwoman of the Met Gala for almost 20 years, was the belle of the ball. Wintour has been instrumental in transforming the gala into a star-studded, invite-only, multi-million-dollar fundraiser. At $30,000 a piece, tickets are reserved for the fashion and entertainment elite — which is why, when the Met's Costume Institute debuts its annual exhibit, the world takes notice.

Manus x Machina: Fashion In An Age Of Technology is this year's exhibit. It will run from May 5 to August 14. In honor of the exhibit's tech-based theme (and Apple sponsorship), guests were asked to follow a "tech white tie" dress code.

Event co-chair Taylor Swift showed up in Louis Vuitton as what she described as a "futuristic gladiator robot." 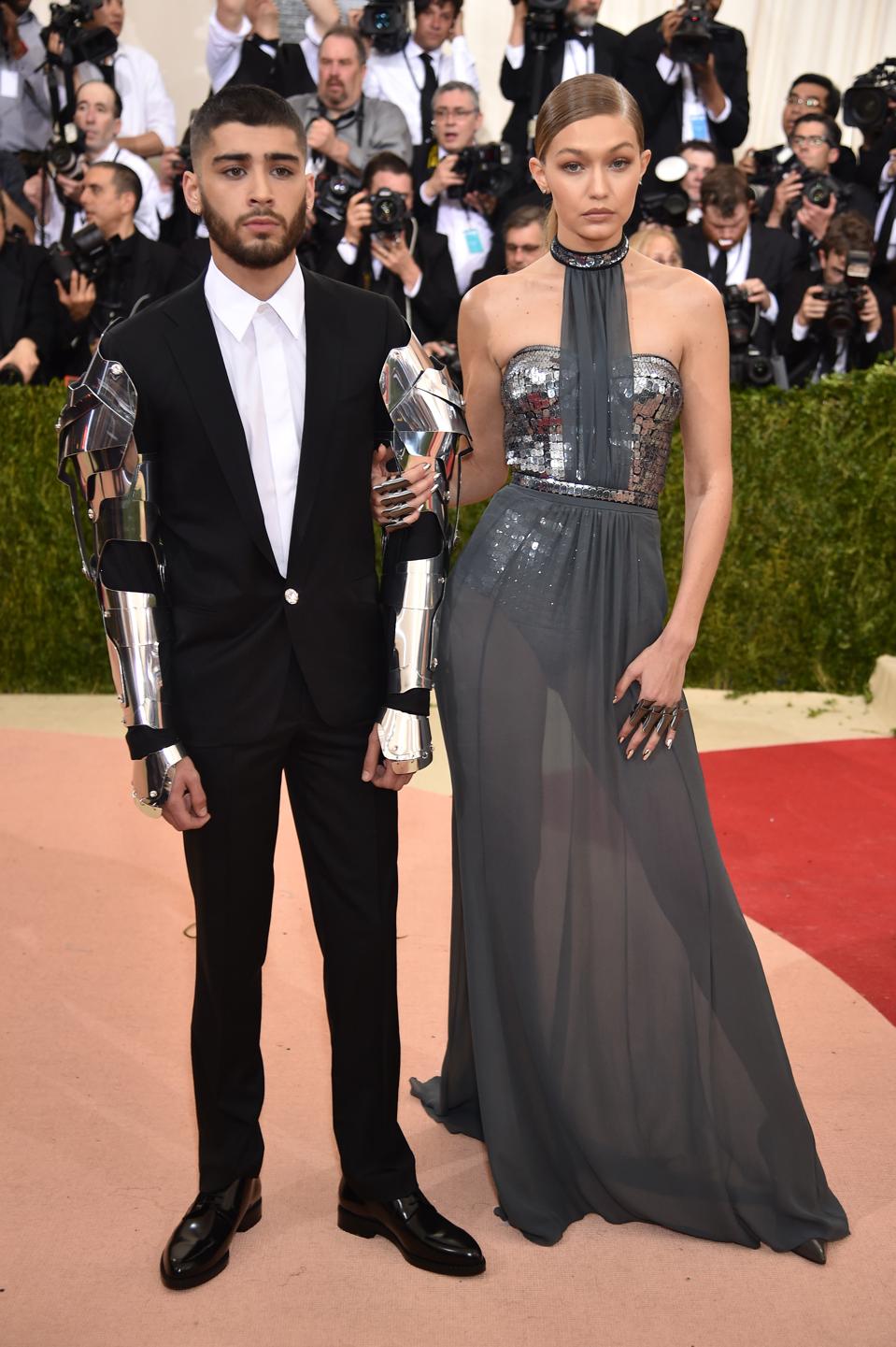 And Beyoncé made the final grand entrance, looking like a kickass fembot in her nude-colored latex (slaytex?) Givenchy dress. But the night's highlights were the A-list guests who incorporated actual gadgetry into their Met Gala dresses.

Supermodel Karolina Kurkova wore a gown designed by Marchesa in collaboration with IBM. Her outfit embodied "wearable technology" on two fronts: a dress covered in 3D LED flowers, and a dress color that changed based on five moods that her followers tweeted to her account. 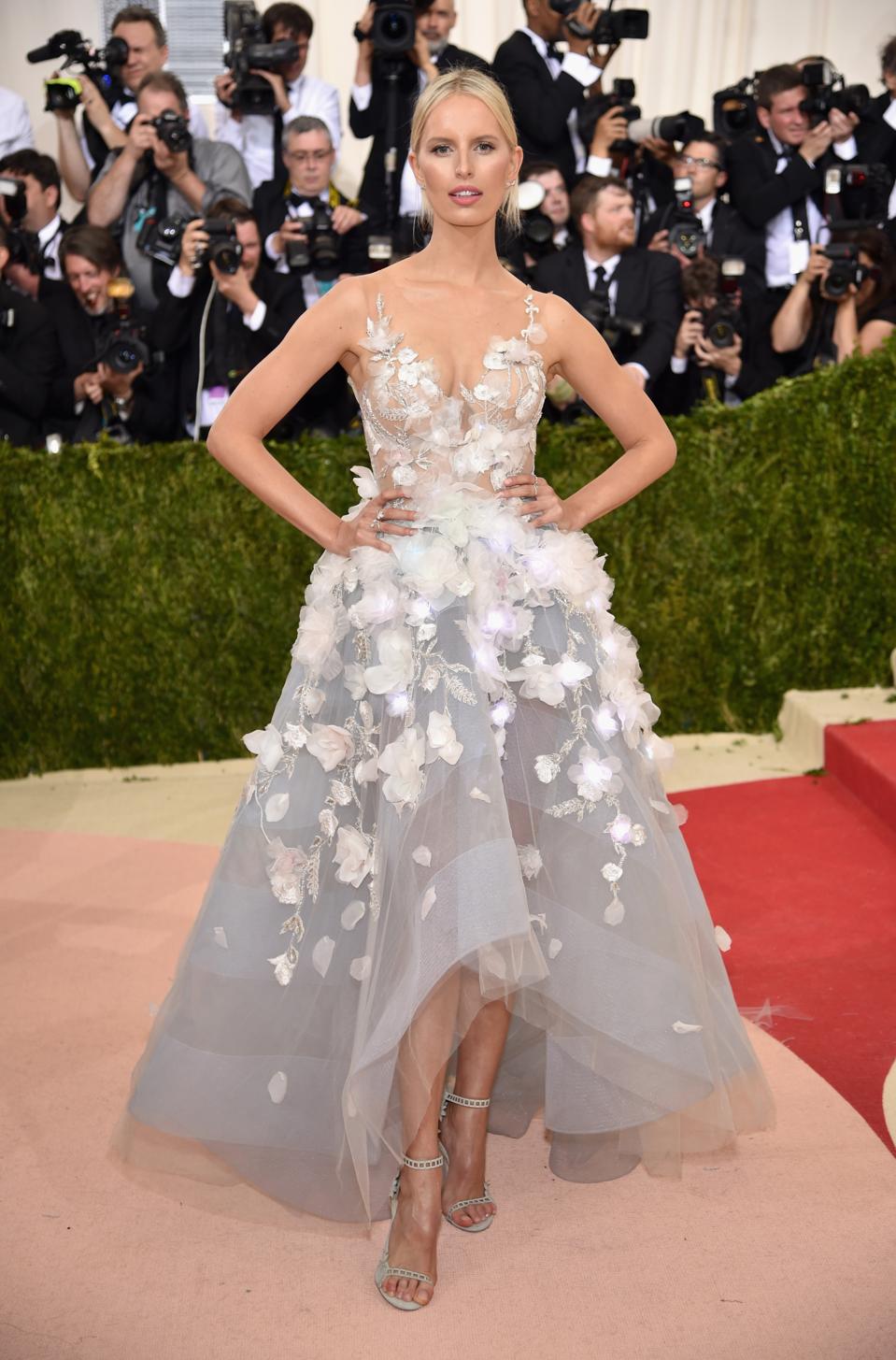 From the glamorous to the completely outrageous, Monday night's event showed the world how much technology has influenced the world of haute couture.

Manus x Machina will bring together more than 100 ensembles from over 130 years of fashion. Highlights will include Issey Miyaki's  "Flying Saucer" dress, a mutable outfit that, like a Slinky, can expand and shrink to its original shape.

Miyake has consistently integrated innovative textiles with his designs. For last year's spring collection, Miyaki introduced the 3D Steam Stretch, a technique that uses steam to give a lightweight, textured look to pre-treated fabric.

The exhibit will also feature designs from Hussein Chalayan, whose spring '07 collection featured a dress that transformed on the runway from a Victorian gown to a 1920s flapper dress.

Source. Hussein Chalayan's "Kaikoku" dress (autumn/winter 2011–12) moves on invisible wheels to give the impression that the model is floating on air.

"Traditionally, the distinction between the haute couture and prêt-à-porter (ready-to-wear) was based on the handmade and the machine-made," said Andrew Bolto, curator in charge of The Costume Institute. "But recently, this distinction has become increasingly blurred as both disciplines have embraced the practices and techniques of the other."

In other words, the lines have now been blurred between traditional haute couture and mass-produced, machine-made garments.

High-end fashion and wearable technology are seemingly at odds. Haute couture is constructed by hand, using only high-quality fabrics for a single user. On the other hand, ready-to-wear garments (including wearable devices) are entirely machine-made to provide practical convenience for the masses. What unites the two concepts, however, is innovation.

“Both the automated and handcrafted process require similar amounts of thoughtfulness and expertise," said Jonathan Ive, Apple’s Chief Design Officer. "There are instances where technology is optimized, but ultimately it’s the amount of care put into the craftsmanship, whether it’s machine-made or handmade, that transforms ordinary materials into something extraordinary."

We don't expect the everyday wearable device to emerge in fashion's highest circles anytime soon. But as the Met Gala 2016 proved, technology has merged with fashion in ways we had never anticipated. If Anna Wintour and Apple have any say in the future of wearables and fashion, it will probably be manus with machina.

As the Met Gala 2016 proved, technology has merged with fashion in ways we had never anticipated.