These Wearables Could Help Addicts Get Clean

The most popular wearable devices are typically developed for the sake of convenience. They help you stick to your healthy diet, fitness regime, sleep habits, and busy schedule. Most wearables don't solve a pressing problem; they just make your life easier.

But now we've entered a new era of wearable tech utility. Between "smart" pills and Google Glass, wearables are now helping people spot, treat, and cope with severe diseases and physical disabilities. For the one in six Americans struggling with addiction to drugs and alcohol, wearables also have the capacity to save lives.

Check out the wearable devices that are being developed to help millions of people recover from various types of substance abuse.

The average smoker attempts to quit eight to 10 times. To improve their odds of quitting on the first try, Chrono Therapeutics developed SmartStop, a wearable device that works in two ways:

1. It delivers specific doses of nicotine before the user's craving kicks in. Since smokers have peak craving times (usually in the morning, evening, and at mealtimes), this wearable device delivers varied dosages of nicotine based on those craving patterns.

2. It offers real-time support. The device links Bluetooth to SmartStop's mobile app, which offers immediate guidance for smokers to cope with their cravings and stick to their quit plan.

Chrono Therapeutics' device helps smokers kick their habit on the first try. Researchers also hope this technology can be used to treat severe illnesses (like Parkinson's disease) and addiction to prescription drugs.

Think of this Android smartwatch app as a mobile quit coach. After the user fills out a short questionnaire about their smoking habits, the app tracks the days and hours since they last smoked, the number of cigarettes they've avoided, and the amount of money they've saved since going cold turkey.

The app can't actually stop people from taking another drag, but its hourly calculations could offer the motivation a smoker needs to quit for good.

Alcohol is the most abused drug worldwide. It affects over 18.5 million American adults, and it costs the U.S. economy $200 billion each year. While there is no cure for alcoholism, researchers are developing practical devices to help recovering alcoholics stick to their sobriety.

This wearable sensor detects levels of an ethanol metabolite, called ethyl glucuronide (EtG), that is present in alcohol and secreted by human sweat. Although a standard breathalyzer detects ethanol in your breath, it only has a short window of detection. The EtG sensor, on the other hand, can measure alcohol levels in the body from one to four days after a person drinks.

The sensor won't stop anyone from drinking. However, it can more accurately identify the number of drinks consumed to identify the long-term behavioral and physiological effects caused by alcohol abuse.

Pala-linq is a mobile app and wearable accessory that supports people recovering from drug and/or alcohol addiction. After a patient leaves a treatment center, they can use the app to create a customized profile of their recovery plan and upload contacts of people in their support network. The device is currently in beta-testing mode.

Pala-linq connects the recovering addict to a 24/7 support system so they can stick to their recovery plan and avoid relapse.

Researchers at the University of Massachusetts Medical School are testing a device that can track when a drug addict relapses. This wristband monitors heartbeat, motion, skin temperature, GPS location, and skin electrical conductance (i.e., a change in the amount of electricity the skin can conduct as a response to stimuli like drugs) at 30-second intervals.

This wristband can help doctors get more accurate readings of the physiological symptoms of a possible relapse — like drops in skin temperature, increases in skin electrical conductance, agitated movements, etc. — and how those physiological changes compare between first-time users and lifelong addicts. It can also help doctors figure out if a relapse is triggered by a certain time, setting, or life event, and it can alert a doctor or sponsor when it detects the signs of a potential relapse.

E4 Empatica offers a more accurate method for doctors to identify patients' patterns of drug use and potential relapse triggers.

According to a study led by a team at the National Institute on Drug Abuse (NIDA) in Baltimore, heroin and cocaine users show a significant spike in heart rate when they experience a craving. Because heart rate changes are one of many signs of craving and exposure to drugs, the NIDA has developed a biosensor that detects physiological and behavioral symptoms — including changes in heart and breathing rate, skin temperature, alcohol levels, and movement — in patients struggling with substance abuse.

Probuphine is designed to curb cravings for heroin and prescription painkillers. This implant offers controlled doses of buprenorphine, an opioid medication that eases withdrawal symptoms, reduces cravings, and lowers the risk of relapse. Probuphine completed phase 3 clinical trial testing and a review by health experts, but it has to be approved by the FDA.

While buprenorphine can be used to help people quit their opiate addiction, the drug itself is highly addictive. An implant that regulates dosages of buprenorphine can prevent users from selling it, giving it to kids, or taking excessive amounts that lead to addiction.

The Zephyr biosensor, which wraps around the user's chest, measures vital signs and relays the data to doctors and therapists working with recovering addicts. During a study at the Baylor College of Medicine in Houston, researchers used the biosensor to monitor changes in the heart and breathing rates of cocaine users exposed to the drug. The study found that participants experienced a spike in heart and breathing rates up to 10 minutes after exposure.

The Zephyr biosensor is cheaper, more accurate, and more portable than standard hospital equipment for measuring heart and breathing rates. However, because its battery life only lasts for one day, it opens up a giant loophole for addicts who want to avoid being monitored. Once the Zephyr biosensor is modified to track vital signs for longer periods of time, researchers hope the biosensor can eventually be used to help people quit smoking and curb obesity.

The Zephyr biosensor helps doctors and therapists identify signs of drug use so they can work with a recovering addict to change behaviors that lead to relapse.

For recovering drug addicts, exposure to environmental triggers poses a dangerous threat to their sobriety. Virtual reality puts addicts face-to-face with those triggers.

Researchers at the University of Houston are currently testing the use of VR for people addicted to nicotine, weed, alcohol, and hard drugs like heroin. The VR program uses life-sized 3-D avatars to recreate realistic scenarios, like a party or a dinner with friends, that would expose the individual to an environment that might tempt them to relapse.

“In traditional therapy we role-play with the patient, but the context is all wrong,” said one of the study leaders, Patrick Bordnick. “They know they’re in a therapist’s office and the drug isn’t there. We need to put patients in realistic virtual reality environments and make them feel they are there with the drug, and the temptation, to get a clearer picture and improve interventions.”

While the participant wears a headset and walks on a treadmill, they navigate a 3-D environment that includes triggers like money, cigarette lighters, alcohol, music, people snorting or shooting up drugs — even the smells of marijuana and food — to make the person actually feel and overcome the temptation to use.

“If there’s people eating pizza in the restaurant, you smell pizza. And marijuana, obviously,” Bordnick said. “We have raw marijuana smell, marijuana smoke, incense, anything that’s associated with the drug. If you go outdoors, we have sort of a pine, or outdoorsy, scent.”

Virtual role-playing can be used for smokers, alcoholics, and other drug addicts to help them identify their triggers and cope with the inevitable urge to relapse.

Quell is an FDA-approved wearable device attached by Velcro to the upper calf. It stimulates specific nerves to activate the body's natural anti-pain systems so patients don't have to rely on highly addictive painkillers to get the same relief.

This wearable won't treat addiction, but it could prevent it. 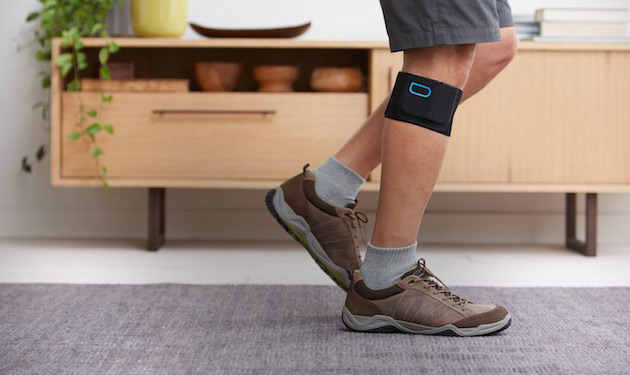 What Are The Next Steps?

Chrono Therapeutics received a $2.25 million grant from the U.S. National Institute of Health's National Cancer Institute (NCI) — the first grant of its kind for a programmable nicotine replacement therapy. It won't be available until 2017. Other wearables are still in clinical testing phases or waiting for FDA approval.

These wearable devices aren't the be-all, end-all solution to a life-threatening illness like addiction. However, they're promising pieces of technology that can work in conjunction with medication, therapy, and support groups to help addicts curb cravings, sober up, and stay on track with their recovery.

These wearables can't cure substance abuse, but they can help an addict curb their cravings and keep on track with their recovery.